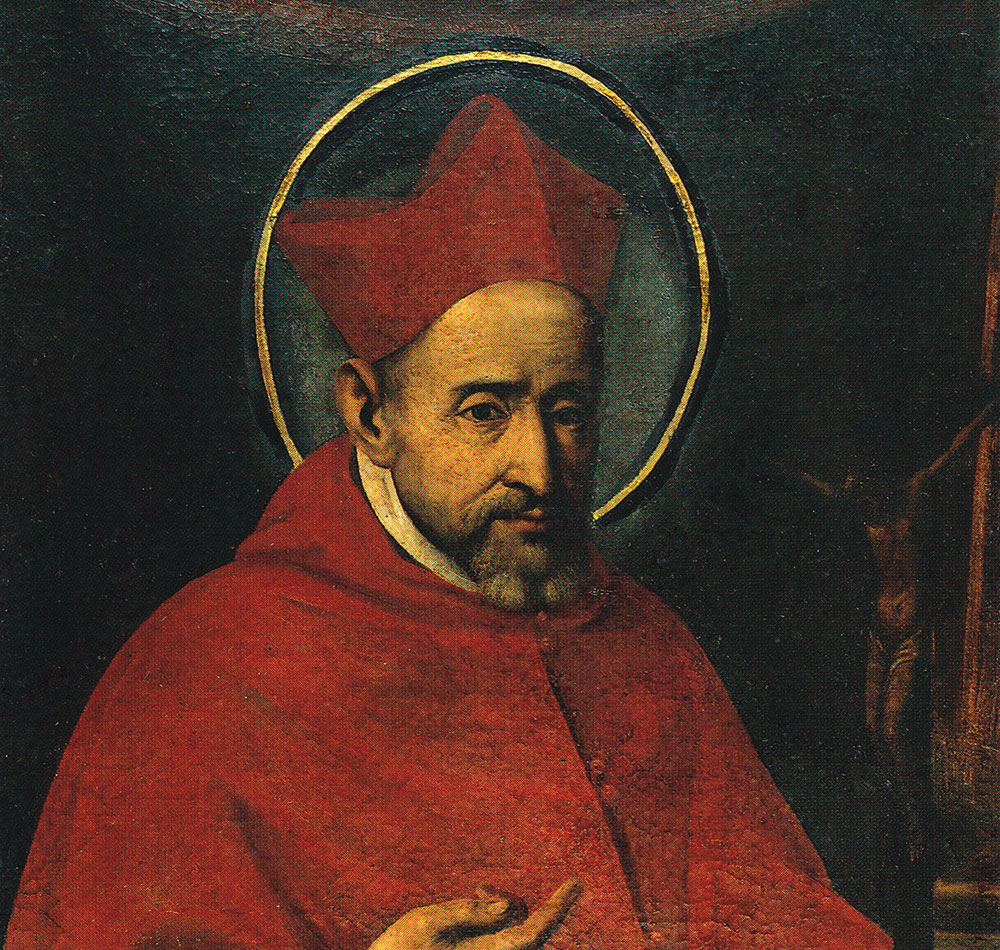 Robert Bellarmine (Roberto Bellarmino, 1542-1621) was a scholar, theologian and intrepid defender of the Faith during the controversies of the Reformation. As a cardinal he served three popes who counted on his wisdom and scholarly advice. He was born in central Italy, in the small hill city of Montepulciano, and was the nephew, on his mother's side, of Pope Marcellus II. His father initially opposed Bellarmine's desire to become a Jesuit and requested that he wait a year to test his vocation. Father General James Laínez decided to count that year as the young man's novitiate and accepted his vows as soon as he arrived in Rome. After studying philosophy at the Roman College, he studied theology first at the University of Padua and then at Louvain. He was ordained in 1570 in the same year that the Jesuits opened their own theologate in Louvain where he was appointed the first Jesuit professor of theology. During his seven years there he became familiar with the writings of the Reformers, especially Martin Luther and John Calvin, whose objections against the Roman Church he answered in his courses.

The Jesuit theologian returned to the Roman College in 1576 to take the chair of ""controversial theology"" which meant specializing in those theological disputes that divided the Christian Church. The success of his lectures during his 11 years there led the pope to name him to papal commissions on revising the Vulgate (Latin) Bible and preparing a new edition of the Septuagint (Greek) Bible. In 1586 he published the first of three volumes of his Controversies, his most important work. In 1598 he published his Catechism, which became widely used and was translated into 62 languages. As he devoted himself to writing, Father Bellarmine stopped teaching but continued spiritual direction of Jesuit students, including the young nobleman, Aloysius Gonzaga. In 1592 he was appointed rector of the college, with responsibility for 220 Jesuits; then in 1594 he was appointed provincial of the Naples province.

Bellarmine was only provincial for two years before Pope Clement VIII asked him to become his theological adviser. Despite the Jesuit's own desires, the pope named him a cardinal on March 3, 1599. Being a cardinal meant that he had to be surrounded by servants and gentlemen-in-waiting, but he continued to live simply and distribute to the poor money he did not spend on himself. To Cardinal Bellarmine's surprise, in 1602 the Holy Father named him Archbishop of Capua, a diocese north of Naples. When Paul V was elected on May 16, 1605, the new pope asked Cardinal Bellarmine to remain in Rome, where he was named to several Vatican congregations.

Cardinal Bellarmine always maintained a Jesuit spiritual life, and used the annual retreat, which he extended to 30-days per year, as an opportunity to write books on spirituality. As he progressed into his 70s, he asked the Holy Father for permission to retire and return to live in the Jesuit novitiate of Sant'Andrea in Rome. Both Paul V and his successor, Gregory XV, refused to allow Bellarmine to leave their service because they so valued his presence. Eventually Pope Gregory relented, and the Jesuit cardinal moved into the novitiate only days before contracting a fever from which he never recovered. The simple funeral he had requested became, by order of the pope, something much more elaborate as testimony to someone whose service to the Church had been outstanding. His body was transferred in 1923 to the church of St. Ignatius.