A Way of the Cross for today proposed by the coalition The Amazon: Common Home 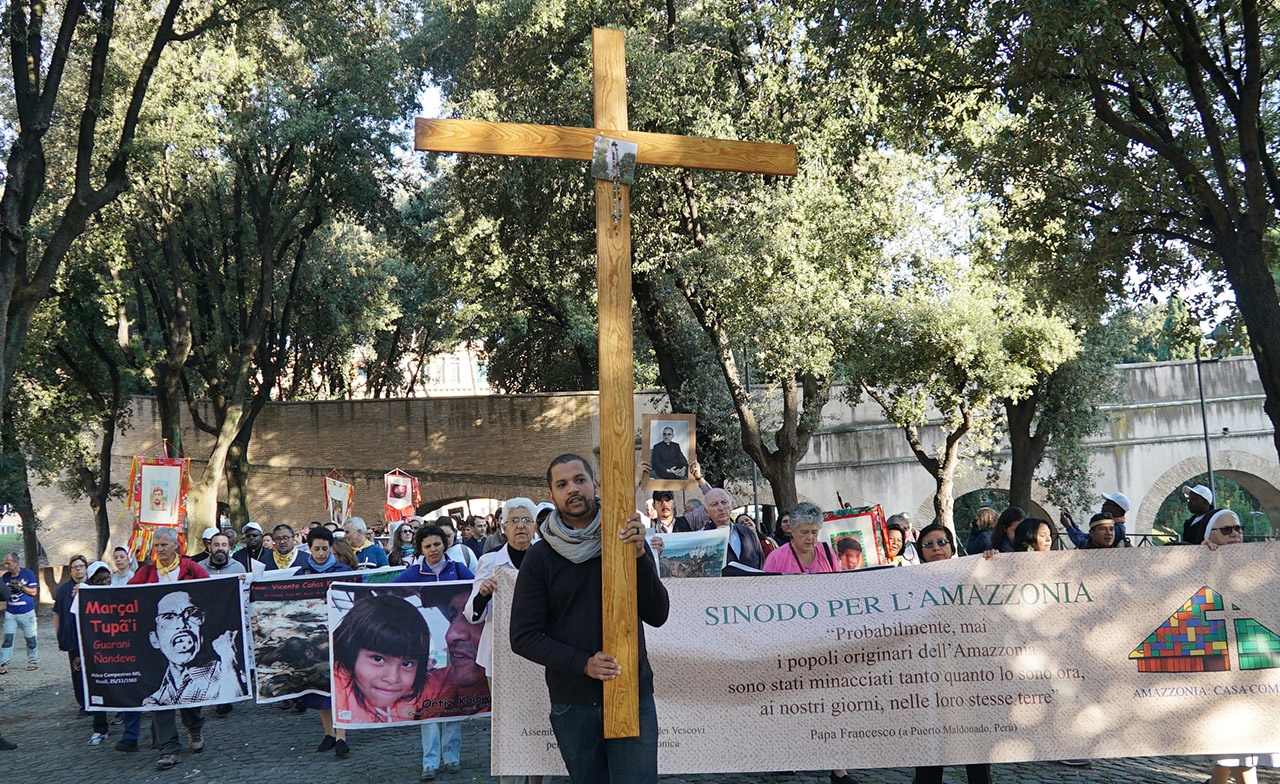 In the context of the Synod on the Amazon, the indigenous peoples of South America, especially those from the Brazilian Amazon, gathered a delegation of several dozen people to express their support for the project of Pope Francis. They had taken part in the inaugural Mass of the Synod, and had also accompanied the Pope and the Jesuit Cardinal Pedro Barreto in a previous walk between Saint Peter’s Basilica and the hall where the Synodal Fathers gather.

Several of them had also participated in the North-South meeting organized by the Jesuit Conference of Canada and the United States at the General Curia on 17th October. Then, on Saturday 19th, the group, which identifies itself as “The Amazon: Common Home”, invited all those who supported their cause to participate in a Way of the Cross. The meeting point was the famous Castel Sant’Angelo, a former prison where popes and even a former General of the Jesuits, Fr. Lorenzo Ricci, had died in captivity.

There were 15 stops on the way to St. Peter’s Square. Each station recalled the stations of Jesus’ way to the Golgotha but also an aspect of the suffering experienced by the peoples or by the land of the Amazon. Songs, readings, prayers and displays, for passers-by, tourists and pilgrims, as well as many banners commemorating important figures from Latin America who gave their lives in the service of the peoples in whose midst they lived.

The North American delegation, in particular the Lakota indigenous people but also representatives of the First Nations of Canada, participated in two specific moments. Before starting, they took part in the ritual of “the smudge”, the purification of body and mind from the smoke of sacred herbs. This same group also animated the 6th station, the one that reminds us of Saint Veronica wiping Jesus’ face. An image was nailed to the large cross, an evocation of the suffering of the indigenous peoples of North America.

Look at the photo album that chronicles this symbolic activity of prayer and solidarity with the members of the Synod on the Amazon.

Share this Post:
“Everything is linked”: North-South encounter and solidarity
50 Years of Justice and Reconciliation – Xavier Jeyaraj SJ
Posted by Communications Office - Editor in Curia Generalizia