Michael Schöpf SJ: “This experience made clear to me the power of reconciliation”

On 27 September, with the World Day of Migrants and Refugees, the Catholic Church draws attention to the plight of the millions of forcibly displaced people around the world. Throughout the year, Pope Francis reminds us that Jesus and his family have themselves experienced persecution and exile and that the Gospel today requires Christians to show solidarity with migrants and refugees. The Dicastery for Integral Human Development in the Vatican makes available to all, on its website, testimonies and ideas for reflection. Cardinal Michael Czerny SJ is the head of the “Migrants and Refugees” section of this Dicastery and, together with the Holy Father, does not miss any opportunity to recall the concrete commitment of the Church and its members to this major - perhaps the most demanding - challenge facing humanity in the 21st century.

The Society of Jesus actively participates in this movement of accompaniment and solidarity with migrants and refugees. It does so especially through the international organisation founded by Father Arrupe, the Jesuit Refugee Service (JRS). Recently, a Deputy International Director has been appointed: Br. Michael Schöpf SJ, from the German Province. He has been entrusted by Father General to support the International Director, Fr. Tom Smolich.

Michael Schöpf has been involved in various capacities over the years with JRS, including as Director of JRS Europe. He had been a field worker for JRS from his early years in religious life, in Kenya, Uganda and Rwanda. At the time of his appointment, he had been interviewed by the Jesuit Communications Service of Europe. He then confided what is inspiring him in the role he will have at the international level. 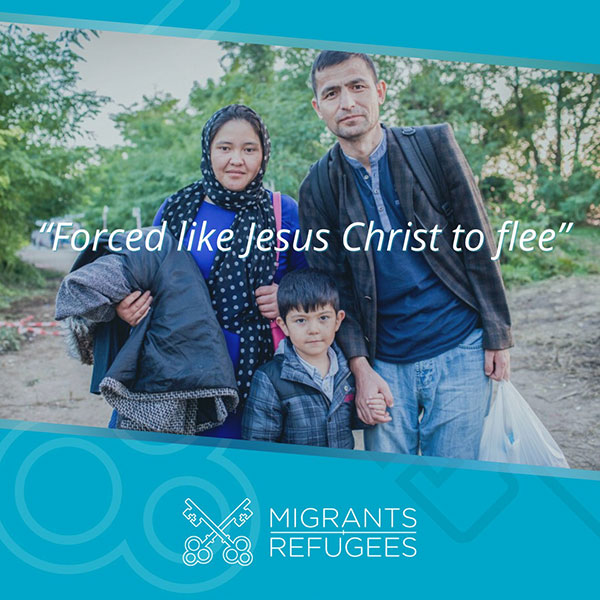 “Now that I am returning to the work of JRS, our society is much more polarized. The concerns of refugees are perhaps immediately clearer than before. But also the need for reconciliation with them and with ourselves! For this we need a new perspective on human dignity, theirs and ours. It is time to engage in even more dialogue with the refugees.

During a visit to a deportation prison a few years ago, I was struck by a wave of aggression. Those who were held and crammed together there also blamed me for their desperate situation, and I found myself a part of the system that kept them there. On leaving the deportation prison, I met a young man who behaved differently, sitting alone and withdrawn in a quiet corner. When I approached him, he calmly said that he was preparing for an English lesson which he was about to give to others. “This is how I maintain my dignity in this situation,” he explained his commitment to me. “And so I help the others at least a little, because then they might even be able to read the letters of the government that decides their fate.” I could see that he had reconciled himself with his situation and that he was able to do something that would bear fruit for others and therefore for him as well. He had succeeded in creating new life. I would also like to contribute to this with my work. This experience made clear to me the power of reconciliation.”

On this World Day of Migrants and Refugees, let us be touched by this request for proximity, welcome, dialogue, everything that can lead to reconciliation in our divided world.

Read the full interview with Brother Schöpf on