Saint Joseph, an encouragement to live poetry in prose today

I have considered the invitation to write an article on Saint Joseph, on the occasion of his feast day and the year dedicated to him, as a personal stimulus to become aware of what this Saint, whose name is part of my name, together with that of his wife Mary, can mean and inspire in today’s world.

The absence of information in the New Testament about important figures in Christian piety such as the Virgin and Saint Joseph is truly surprising, and even more so in the case of the latter. We can say that, except in the genealogies (Mt 1;16; Lk 3;23) and in the general references “Is not this the carpenter’s son...?” (Mt 13:55), “...the son of Joseph?” (Lk 4:22; Jn 6:42,) only in Matthew’s Gospel, written for Jews, is there any mention of him, and only at the beginning, in the infancy narrative. This is a very specific literary genre, which we could characterise as “symbolic-theological catechesis.” Therefore, between the boundless devotional imagination of popular piety and the strict scepticism of historicist rigorism, we can glimpse the suggestive brushstrokes inspired by the reading in faith of those few “Matthean” verses, in which the good Joseph appears as “acting” (Mt 1:18-25; 2:13-15.19-23.) On the other hand, there are the very few “Lucan” verses in which he is simply mentioned alongside Mary (Lk 2:4; 16:48).

I believe that in these few pieces of information we can admire a good and just man, “a saint next door,” as the Pope says in Gaudete et exsultate, with attitudes that are very necessary at the present time.

The first attitude, which Matthew introduces us to, could not be more topical as an example to follow in today’s society, in which, despite being in the 21st century, there are still inexplicably male chauvinist prejudices, attitudes and violence. In a world as sexist as that of 1st century Palestine, Joseph discovers that, before they have lived together, his fiancée is pregnant. We can imagine his surprise, grief, disappointment... but his attitude is one of profound respect. He plans to distance himself from her without judging her, let alone defaming her. The message in his dream, which reassures him and encourages him to welcome her into his home, could be interpreted as an authentic discernment, in which the voice of God, the voice of love, can be heard instead of our primary impulses, prejudices and ideologies. 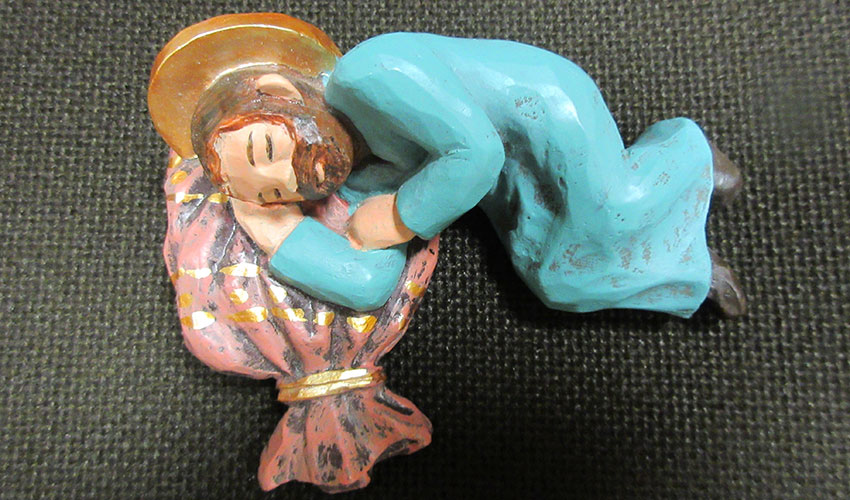 Then comes that other experience, also sadly present in our 21st century, the need to leave one’s own land to save one’s life or to seek a dignified life. Joseph, with his wife and son, has to emigrate to Egypt and once again it is the messages in dreams that warn him of the need to flee, just as they will also tell him of the possibility of returning, and even of going to Galilee, as a safer place than Judea. Beyond these sober and brief verses, we can guess the multiple sufferings, worries and uncertainties that such an adventure entails, as we can see in so many people who are suffering today. And also on this occasion we can see in these messages in dreams, a lot of headaches, sleepless nights, thoughts and reflections, until we reach the decision to emigrate and the decision to return.

In the very few verses of Luke, Joseph is only mentioned next to his wife, but in this way he is a living witness of profound experiences with striking contrasts: the birth in misery and marginalisation of a defenceless child, who is presented by the angels as a Saviour, Messiah and Lord. It is clear that what Joseph’s eyes see is very different from what the angels express.

Joseph had to live a unique and unrepeatable experience in the history of humanity, full of the poetry reflected in the dreams of the prophets of Israel and the hopes lived century after century by the people. But Joseph lived that spectacular poetry in the vulgar everyday proseof the life of the poor and simple people, with their fears and hopes, sorrows and joys, which did not catch the attention of any historian then, as it would not catch the attention of any journalist now.

We can imagine, with all the poetic and pious fantasy we want, the life of the “Holy Family” in Nazareth, but we can only approach its authentic reality with the “Josephine” attitudes that Matthew and Luke suggest to us, so necessary in our world today: to accept and respect the reality of the other; to live the prosaic, and sometimes difficult, everyday reality with the poetry and hope that comes from seeing and living with the heart; to trust in being able to listen to the voice of God, who is present in us and in our lives, even if sometimes we do not understand why things happen, that is, to live poetry in prose.

Spirituality
Share this Post:
New Provincial for Greater Poland and Mazovia
Even the Provincials “go to school”
Posted by Communications Office - Editor in Curia Generalizia

In memory of all the victims of the pandemic: a hymn