Seven years have passed since Frans van der Lugt was murdered on 7 April 2014 in Homs, Syria, on a Monday of Holy Week. I dare to believe that what happened on that day was like the crowning of his vocation, the one he felt when he was almost 10 years old. It was from that time that he discovered God’s unconditional love for our world and the free love that he himself is invited to offer to the world in return, in the image of the sacrifice of love and forgiveness offered by Christ on the cross. I refer here to the story of his vocation, which he shared on several occasions.

Frans’ vocation was born as a result of meditating on the Stations of the Cross in the parish church he attended in Amsterdam. This is how he describes what he felt that day: “I came to the cross and meditated on Christ crucified while listening to his words - at that age I knew the words: ‘Father, forgive them, for they know not what they do.’ It was then that I had a profound experience; I was entirely in the presence of God’s love. It is a feeling that comes over you without you making it happen. It comes from a true communication with the heart of God.”

I suspect that what happened to Frans on Monday 7 April 2014, the first day of Holy Week, was something similar. Seeing his murderer, Frans was seized by the same compassionate feelings of Christ towards his own murderers. With Him, he repeated, “Father forgive him, for he knows not what he does.” Then he surrendered himself to the Father in an act of faith and trust in his boundless love. 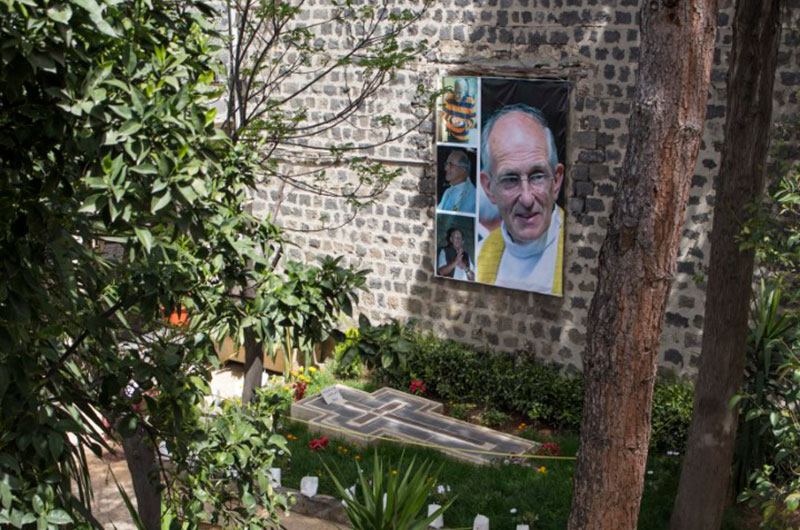 Today, when I think of Frans van der Lugt, it is the image of the garden that comes to my mind. The garden in which he was buried, in the very place where he was killed, inside the Jesuit residence in Homs. At the height of the war raging all around him, Frans used to call this garden “the oasis of peace.” He worked hard to keep it free from external violence and to maintain it so that life would not stop there, so that plants, birds (and the tortoise!) would continue to find a safe haven. For him, it was a sign that life was stronger than death and that peace would one day return.

Even if, seven years after Frans’ death, peace has still not returned to Syria and new victims, every day, pay the price of violence and hatred between people - and of their partisan and selfish interests - what Frans experienced, in the footsteps of Christ, remains like a prophecy of the future: “I saw a new heaven and a new earth” (Rev 21:1). This garden of Homs has become the garden of Easter, like the one where Christ was buried. It is also the garden of the encounter and of the sending: “Do not hold me back! Go and tell my brothers that I am ascending to my Father and your Father” (Jn 20:17.)