Sri Lanka is experiencing a serious economic and political crisis; it is a call for reflection and action.

As Sri Lanka’s worst economic disaster in living memory continue to destroy the livelihoods of millions, driven many into poverty and has led to multiple crises, public anger towards the president and anti-government protests are currently surging exponentially as never before both across the island, and overseas. As scripture says, ‘Those who live by the sword will die by the sword’. They came to power using the sword of division and, today, they stand accused of that crime and now being beheaded by that same poisonous sword by the same people who voted them in, standing united. The truth is Sri Lanka is now in shambles.

With the spontaneous action of citizen protest, however, a new people’s movement has emerged, openly demanding some fundamental changes in the existing political order. This is a rare moment of Sri Lankan citizens’ political awakening. The citizens are now asserting their public duty to the common good of the larger political community. The positive dimension of the protest movement is that it has brought to an end one institutional consequence of Sri Lanka’s representative democracy: the notion of ‘passive citizenship’. What we see now is that the citizens have shed this habit of political passivity to come forward and reclaim their role as politically active and responsible citizens. What is remarkable is that the economic and political crisis has opened up new space for building a ‘democratic public’ with a political consciousness transcending ethnic and religious communalism. 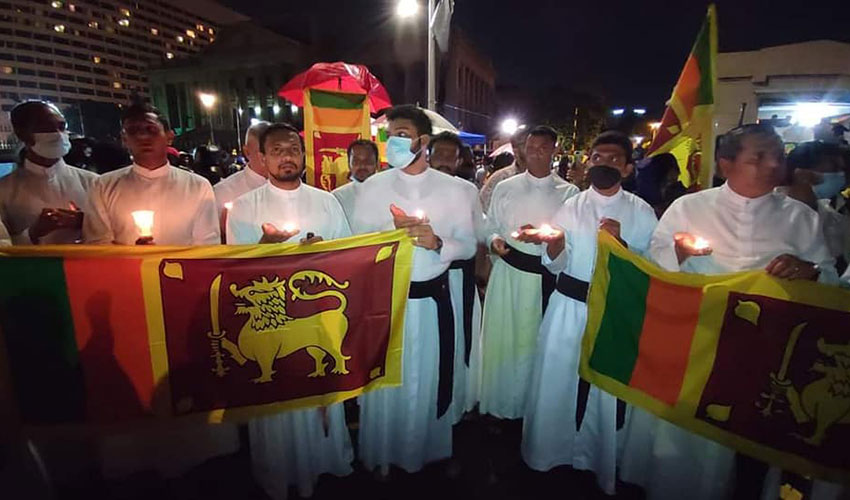 The Jesuits of Sri Lanka are continuously providing support for families which are affected by the crisis. A task force comprising of three Jesuits have been set-up to organize the works of Jesuits in responding to the present crisis. The task force will work together with the appointed members of the disaster management team of each Jesuit community of the Province in identifying and assisting the families in need. The goal is to ensure adequate social, health and food protection for people, especially those who are vulnerable and households that have children, older people and persons with disabilities as members being particularly vulnerable: Offering financial aid and protection. The primary objective is to help keep individuals food-secure and well-nourished, so that they are less likely to suffer from ill-health. This can also reduce the risk of domestic violence by decreasing stress levels and safeguarding the mental health of parents, children and other household members. Further to protect human rights and development which, in the long-term, will minimize losses in human capital and enable Sri Lanka to continue building a labor force with the skills to compete in international markets.

The Jesuits are also voicing their support for the young at various levels by engaging in political action, protest and human rights campaign.

It is true that the signs at present are that the protest campaign will intensify in the coming days and weeks, with increasing numbers of citizens joining it. Our duty as Jesuits in Sri Lanka Province is that we must broaden and concretise this democratic moment into sustained political action, pushing for structural changes in the long term.It is inevitable that there will occur, in the coming weeks, a sharp polarisation of forces, with an angered and politically fired up public on one side and an isolated government with diminished legitimacy to rule on the other. The inspiration is that the young citizens in large numbers are spearheading this new movement of resistance and political hope. This is Sri Lanka’s long awaited moment of democracy: what Pope Francis called a “better kind of politics”.

JCSA
Share this Post:
Prayer and listening for greater commitment
Keys to Contemplating the Everyday
Posted by Communications Office - Editor in Curia Generalizia