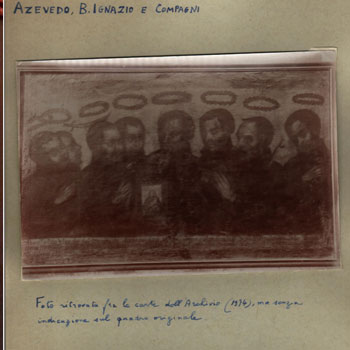 Diego Luis de San Vitores (1627-1672) died a martyr's death on the island of Guam. He initially resolved to enter the Society of Jesus when he was only 11 years old, but his parents resisted for two more years. Born of noble parents in Burgos, Spain, he entered the novitiate in 1640 and studied philosophy and theology in Alcalá de Henares before being ordained .

on Dec. 23, 1651. Despite his desire to be a missionary in China or Japan, the young Jesuit taught grammar at Oropesa and then tutored young Jesuits studying theology in Madrid.

San Vitores departed Cádiz, Spain May 15, 1660 and sailed to Mexico where he waited 18 months before he could continue on to the Philippines. He busied himself in Mexico City giving missions and preaching in the streets as he had done in Alcalá. Once he arrived in the islands, he spent several months learning Tagalog and then became the master of novices and dean at Manila's university. During his five years in Manila, San Vitores also did missionary work in the interior of Luzon and on the island of Mindoro.

In 1664 he wrote to King Philip IV of Spain describing the missionary harvest that was waiting in the Ladrones, a group of islands about 900 miles northeast of the Philippines. The islands form an archipelago in Micronesia and were renamed Las Marianas in 1668 after Queen Mariana of Austria who sponsored the mission after Philip IV's death in 1665. San Vitores had stopped there on his way to Manila, and had seen the great potential of the islands. The king approved the new mission and asked Father San Vitores to lead it.

Work in the new mission began very smoothly partly because of a shipwrecked Spaniard whose friendship with several island leaders opened a path for the Jesuits who imitated the simple life of the natives by walking barefoot, eating frugal meals and wearing a garb made of matted fibers. After six months the Jesuits counted 13,000 people who had been baptized.

Trouble began in 1670 when Father Luis de Medina was martyred on Saipan, another of the islands in Las Marianas. San Vitores began to pray for the grace of martyrdom. On April 1, 1672, he set out with his companion Pedro Calonsor to save a servant from what they considered a dissolute life. When the two men entered the village of Tumon, they encountered a man named Matapang who was one of the mission's first converts. Matapang threatened the priest who left the village but did not go far away. When Matapang found the Jesuit, he threw a spear without warming into the chest of San Vitores' companion. The missionary realized his own end was imminent so he grabbed his crucifix and fell to his knees. A companion of Matapang struck the Jesuit in the head, killing him instantly.