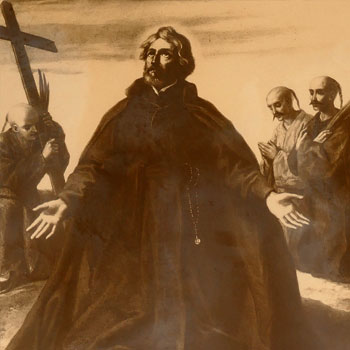 João Batista Machado (1581-1617) was the first of 34 Jesuits to die during the Great Persecution under the shogun Tokugawa Iyeyasu, his son and grandson. When all foreign missionaries were banned in 1614, Father Maciado chose to remain behind, placing himself at great risk.

Maciado was born at Angra on an island in the Azores. He was influenced by the letters of Francis Xavier and desired to follow in that missionaries footsteps. He studied with the Jesuits in Coimbra, Portugal, and then entered the Jesuits in 1601. He went to Goa, India, for his philosophy studies, and to Macao for theology. After his ordination he arrived in Nagasaki, Japan, and enjoyed five peaceful years of ministry to Christians in the capital Miyako (today's Tokyo).

For three years he hid during the day and traveled only at night. This precarious existence changed when he decided to visit the Catholics at the leper colony on one of the Goto Islands. The harbors were full of spies so travel was dangerous, but Maciado would not be deterred. He landed on the island one day and was arrested the next. He was transferred to the town of Kori where he joined a Franciscan priest being held prisoner. Both were housed in the home of Tomonaga, an apostate Christian whose brother was a Jesuit. Tomonaga permitted the two priests to celebrate Mass and joined them in religious conversation. Finally, on Trinity Sunday, April 22, news came after three weeks of this house arrest that they were to die that very afternoon. The two priests were led to a wooded hill outside the town. Each one heard the other's confession, then the Franciscan put his head on the chopping block followed by Maciado. The example of these martyrs led Tomonaga to return to the faith. Eventually he also became a martyr.