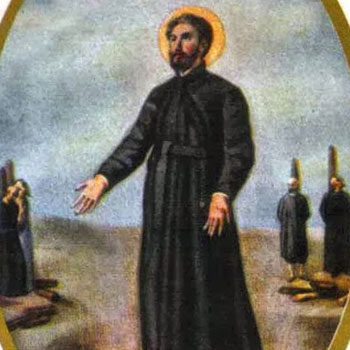 Leonard Kimura (1575-1619) came from a Catholic family distinguished for the its long tradition in Japan. Kimura's grandfather was the first person to receive the waters of baptism from St. Francis Xavier when that missionary visited the island of Hirado in 1550. Kimura's parents moved to Nagasaki which was becoming a Christian center. Leonard was born there, attended the Jesuit school and then served as a catechist for 14 years, traveling with Jesuits on the missionary trips. At the age of 27, he joined the Society, becoming a brother and serving the community as cook, tailor and painter. After awhile he again resumed his role as traveling catechist.

Brother Kimura chose not to leave Japan in 1614 when all foreign missionaries were banned. For two years he worked alone and lived as a fugitive, trying to avoid arrest. In December 16, however, he was captured, along with a group of Christians. His captors did not know that they had caught a Jesuit since he was dressed as a gentleman at the time of his arrest. At his trial, the judge offered him the usual reward of 200 pieces of silver if he would reveal the location of a Jesuit priest. Kimura responded that he knew one Jesuit, but he was a brother, not a priest. The judge dropped the reward to 100 pieces of silver, the normal rate, and Kimura said that he was that Jesuit brother. He was promptly sent to prison, where he found four companions, laymen arrested for harboring priests. One of them was his own brother-in-law, Andrew Tokuan. Their imprisonment lasted almost three years, during which time Kimura taught the jailers and non-Christian prisoners in the fundamentals of the Catholic faith. Ninety-six persons became Christians and the prison became a Christian community with set times for prayer and meditation. Finally, in mid-November, 1619, Bro. Kimura was brought before the governor, who could not understand why he did not leave Japan after the emperor had forbidden Christianity under pain of death. Kimura's confession of faith led the governor to condemn him to death by slow fire. Kimura and his four companions were taken outside Nagasaki to the hill of execution and tied to stakes with firewood carefully stacked around them so it would not burn too quickly. Kimura continued to pray and preach the Gospel until his death.