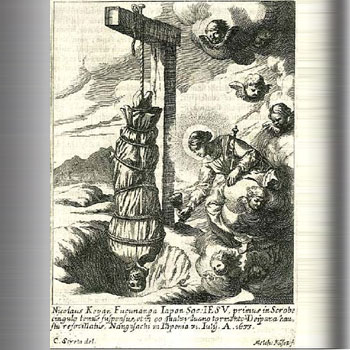 Nicholas Keian Fukunaga was born of Christian parents who enrolled him in the seminario which the Jesuits had set up for the education of the sons (and other relatives) of the Christian daimyo. He continued his studies there until 1588, when he was received into the Society of Jesus. After further studies at the Jesuit collegio in Amakusa, he pronounced his vows as a Jesuit brother and was sent out on mission as a catechist. In 1614, the new ruler of Japan, Tokugawa Ieyasu, ordered the missionaries to leave the country, and Nicholas accompanied the group that went to Macao. Five years later, however, he managed to return secretly to Japan and take up again his pastoral work in Kyushu. His superiors assessed his work very highly, praising especially his moving sermons. His fellow Jesuits recommended to their superiors that he be ordained to the priesthood, but, unfortunately, there was at that time no bishop in Japan who could ordain him.

In July of 1633, Nicholas was captured and thrown into prison in Nagasaki, where he might very well have had the illusion that he was back at the collegio in Amakusa, since Julian Nakaura, Sixtus Iyo, and Paul Saito, all old Jesuit friends from collegio days in Amakusa, were with him in the prison.

Until 1633, Christian martyrs were publicly executed, usually crucified, and these executions drew large crowds, among whom were many Christians who shouted their encouragement to the martyrs and occasionally even tried to join them. To prevent this, the Nagasaki bureau of persecution invented the pit as a means of torture that would create apostates instead of martyrs. Victims were hung by their feet to a framework erected over a pit of foul-smelling offal. To check the circulation of the blood, their bodies were tightly bound with ropes, and at times veins were opened to lower the blood pressure so as to prevent premature death and prolong the torture as long as possible. A simple movement of the hand or a whispered " Nenbutsu " was sufficient to signal apostasy and obtain deliverance from the torture. Some of the martyrs endured this torture for many days before they were delivered by merciful death.

On July 28, Nicholas was put to the torture of ""the pit."" It was in the pit that Nicholas, the good preacher, had the last word in his dialogue with his jailers. When asked by one of them if there was not something in his life that he regretted doing or not having done, Nicholas replied, " Yes, there is one thing I regret very much. That is that I was unable to lead all the Japanese, beginning with the shogun, to Christ."

On the morning of his third day in the pit, which was July 31, the feast day of St Ignatius, Nicholas joined the founder of his Order in heaven.