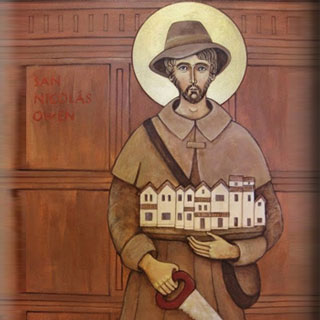 Nicholas Owen (birthday uncertain, 1606) was a Jesuit brother whose talents as a mason and carpenter provided priests with concealed hiding places in the homes of Catholics and enabled the priests to avoid capture despite the most thorough of searches. The son of a carpenter and the brother of two priests, Owen served as Father Edmund Campion's servant and was briefly arrested in 1582 when he spoke out on behalf of Campion's innocence. Then he came to work with Father Henry Garnet, the mission superior.

Owen employed great ingenuity in devising the priest-holes, and even hid his activities by working openly during the day as a regular carpenter, and working on the hiding places only at night. The house servants would be ignorant of his real activity and only he and the owner of the home would know where he had created a hiding place by chipping through stone walls or burrowing into the earth. Some of the places were big enough to accommodate six to 10 people; others concealed inside another hidden room to throw the priest-hunters off the scent. It was hard work to do by oneself, and he suffered injuries in the process. The carpenter was briefly detained in 1594 when he was caught with Father John Gerard, but the police did not realize they had in custody the mastermind behind the hiding places. They released him, and he immediately returned to his work.

Father Garnet wrote a letter in 1588 expressing the hope that his carpenter might someday enter the Society. No names were used, so it is not certain that he was writing about Nicholas Owen, who never did make a formal novitiate; the date he became a Jesuit remains unknown. His final moments, however, are quite clear. He accompanied Garnet to Hinlip Hall, near Worcester, seeking shelter during the crisis provoked by the Gunpowder Plot to blow up Parliament. Jesuits were blamed for the plot even though the actual conspirators had been apprehended.

Garnet and Owen met Father Edward Oldcorne and Brother Ralph Ashley; all four went into hiding holes in Hilip Hall, the two priests in one place, the two brothers in another. The sheriff searched the house for several days without finding the Jesuits until the brothers were forced to leave their hiding place because of hunger and thirst. They tried to pretend to be the priests but could not fool the searchers who uncovered a dozen hiding places before finally apprehending the two priests.

The Jesuits were taken to London, and Owen was put into Marshalsea Prison before being moved to the Tower to be tortured. The king's men realized they had the only person who knew the location of the hiding places and residences of priests all over the kingdom. They were eager to force him to uncover the Catholic underground, but he was even more firm that he would not betray those whom he had spent so much time protecting. He was tortured on the rack for hours a day, several days in succession but maintained his silence. In frustration the torturers kept adding weight to his feet but went beyond all limits. On March 1 his abdomen burst open and his intestines spilled out. Owen lingered on for one painful day before dying in the early hours of March 2. The rack-master tried to cover his behavior, excessive even under the harsh standards of the day, by saying that the Jesuit had committed suicide. Clever and hard-working in his life, Nicholas Owen remained courageous and faithful in his death.