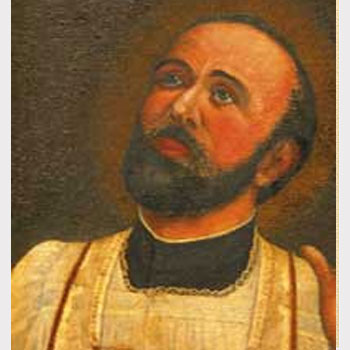 Anthony Daniel (1601-1648) was inspired to become a missionary to New France after meeting a Huron youth studying in Rouen, France, and then Father John de Brébeuf, a missionary recently exiled from the Huron mission. Daniel was a recently ordained priest teaching in the Jesuit college in Eu where he met Brébeuf who was to become his language tutor a few years later in Quebec after the experienced missionary returned to the missions.

In 1634 Daniel set out on his first trip to Huronia, along with Brébeuf. An epidemic was devastating the whole area and made the missionary work more difficult because people suspected that the priests brought the disease. Daniel addressed the issue and won people's confidence; he experienced success in his work at Taendeuiata, especially with children whom he taught the commandments and prayers set to music. The mission superior asked him to return to Quebec a year later to head the boys' school that they were starting. Parents were reluctant to let their sons leave home, so few students went to the school which soon closed. Daniel returned to Huronia in the summer of 1638, settling in the village of Ossossané. A year later he was sent to establish a new mission at Cahiagué, where he remained for eight fruitful years, during which Christian faith became well-established.

In 1647 Daniel moved on to Teanaustayé, where people were also receptive to his ministry, but the settlement was unfortunately close to the trade routes of the Iroquois, who were enemies of the Hurons. On July 2, 1648 Daniel had just returned from the mission headquarters at Sainte-Marie and was finishing Mass when the warning cry arose that Iroquois were approaching. Daniel visited the sick to baptize them in danger of death, as women and children sought shelter and warriors grabbed their weapons. The attackers greatly outnumbered the defenders who gathered in the church. The Jesuit pastor fearlessly faced the Iroquois when they came and forbade them to enter the church. Impressed by his courage, they nevertheless quickly killed him with arrows and a final gun shot to the heart. Then they set the church on fire and tossed the body of the forty-seven-year-old Jesuit into the flames. When his Jesuit brothers came to retrieve his body, they could not find a trace of it.