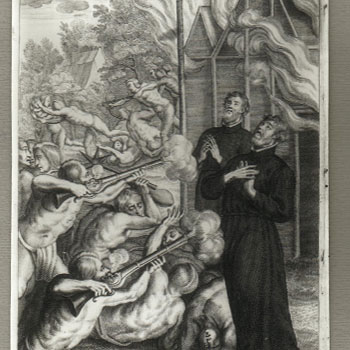 Charles Garnier (1606-1649), had to be persistent in asking to become a missionary because his father, a wealthy Parisian gentleman, opposed his desires and obstructed his first request. That same persistence proved invaluable as he worked with the Petun people who initially were hostile to the Black Robes, as they called the Jesuits.

Garnier spent his first three years in New France learning the Huron language and ministering at the mission in Ossossané. In November 1639 he and Father Isaac Jogues were sent to the Petuns who would not accept them because they remembered the accusation that the Black Robes had caused the epidemic that swept through the Huron lands in 1636. The two Jesuits spent the winter months among the Petun, then returned to Ossossané because they thought they had failed. Father Garnier returned the following autumn, and then left again. Finally he returned during the winter of 1647 and founded two missions because the people were more responsive than on his previous visits.

For several years the Iroquois had been increasing their attacks on the Huron world; they had already killed Father Anthony Daniel in 1648, so Garnier took very seriously the report he received in November 1649 that the Iroquois were on the warpath against the Petun and threatened to burn their villages. He sent his newly-arrived assistant, Father Noel Chabanel back to the mission headquarters because he did not want to leave him at risk; Garnier himself was firm in wanting to stay with his people. On November 7 at mid-afternoon, the Iroquois attacked, killing anyone they found. Garnier was shot twice, once in the chest and once in the abdomen. He was stripped of his cassock and left to die in the cold, but he regained consciousness and tried to move towards a Petun man who had been wounded. An attacker scalped him and then killed him with a blow to the head. Another Jesuit came to the village the next day and buried the gentleman's son in a shallow grave among the people he so wanted to bring to Christ.