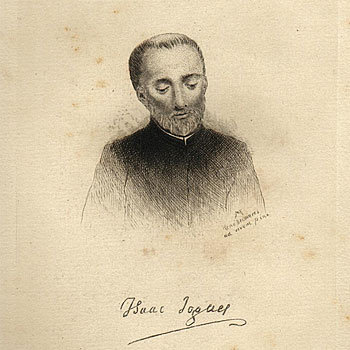 Isaac Jogues (1607-1646) became well known in France when he returned after escaping from slavery among the Mohawks in Canada with his hands badly mutilated from torture. Despite his sufferings, he returned to the missions where he was eventually martyred. Jogues was born in Orleans, France on Jan. 10, 1607 and entered the Jesuits at Rouen when he was 17 years old. Two months after celebrating his first Mass Feb. 10, 1636, he was on his way to the Jesuit mission in New France. He wrote his mother of his great joy when he landed in Quebec and saw native Americans waiting on shore. After only a month and a half, he set out on his first mission to the Hurons, traveling the 900 miles to Ihonatiria by water. The party spent 19 days paddling and carrying the flotilla of canoes around obstacles. During the voyage, the Hurons gave Jogues the name ""Ondessonk"" (""bird of prey"").

Jogues met his hero, Father John de Brébeuf at Ihonatiria, and began learning the Huron language. The first problem arose when a smallpox epidemic broke out in the settlement and people blamed the missionaries for bringing the disease. When the epidemic passed, the settlement was abandoned and Jogues moved first to Teanaustayé and then on to Sainte-Marie, a thriving enterprise where missionaries had taught people how to cultivate the land and raise cattle, pigs and fowl. A group of Chippewas who had come to Sainte-Marie admired the prosperous settlement and invited the Jesuits to establish a mission among them. Jogues visited them in September 1641 and found them eager to hear about God, but the small number of Jesuits made it impossible to expand to new tribes at that time.

During the winter and spring of 1642, Jogues prepared neophytes at Sainte-Marie for baptism on Holy Saturday; one of the 120 adult converts was Ahtsistari, the tribe's greatest war chief. Although the French missionary felt contented that Christianity was beginning to take root, he wanted to convert the whole Huron nation and offered himself in prayer as a sacrifice to make that happen.

In June Jogues accompanied a group of Hurons back to Three Rivers, near Quebec, for supplies. The voyage was hazardous because the Iroquois were at war with the French. Jogues tried to get more Jesuit priests for the mission, but none were available. The provincial suggested he take René Goupil, a layman who was a surgeon and had promised to work with the Jesuits, remain celibate and obey the Jesuit superior. Jogues, Goupil and the Hurons set out Aug. 1 to return to Sainte-Marie, but were attacked one day into the voyage by a war party of 70 Mohawks who took three Frenchmen and 20 Hurons as prisoners. The Mohawks tortured Jogues by partly mutilating his fingers. Goupil asked Jogues to accept him into the Society of Jesus as a brother, given the peril they faced, and Jogues accepted his vows en route.

The Mohawks headed back to their home village passing through the St. Lawrence, Lake Champlain and into Lake George. Finally on August 14 the flotilla arrived at Ossernenon (which today is Auriesville, New York) on the bank of the Mohawk River. The prisoners endured the torture of running the gauntlet between two lines of warriors who beat the captives as they staggered by. Jogues and Goupil had to endure other torments; a woman cut off Jogues' thumb. Then the two Frenchmen became slaves of the chief who had captured them. Goupil was killed on Sept. 29, 1642 when someone saw him make the sign of the cross over a child, but Jogues remained a slave even while ministering to the Hurons who had been captured with him. When he accompanied several Mohawks on a trading trip to the Dutch settlement of Fort Orange (Albany), the Dutch tried unsuccessfully to ransom him. Finally they suggested he try to escape. After some hesitancy, Jogues hid in one of the Dutch ships where he remained for six weeks until his captors' anger at losing him subsided. Eventually he made his way to New York and then back to Europe.

He landed in Brittany on Christmas morning and made his way to Rennes where his Jesuit brothers received him as a hero. Jogues' only regret was his inability to celebrate Mass because of his mutilated hands: on the left hand the index finger was nothing but a stub and the thumb was missing while the thumb and index finger of the right hand were badly disfigured. He was unable to hold the host correctly, but Pope Urban VIII granted him a dispensation to celebrate Mass. Jogues visited his mother in Orléans but was eager to return to the missions so he set sail in May, arriving at Three Rivers in time to attend the July peace conference between the French and the Indians representing the Iroquois federation. The final treaty needed the approval of the Mohawks; Jogues was chosen as an envoy to obtain their consent. He surprised his former captors by arriving as the ambassador of the powerful French nation and offering them that government's gifts. They accepted the terms of the treaty, and Jogues offered pastoral care to the Christian Huron prisoners remaining there. Then Jogues returned to Three Rivers on July 3 where he was supposed to remain.

In September the Hurons asked the Jesuit missionary to accompany them on an embassy to the Mohawks who had invited their former enemies to arrange details of the treaty. Jogues took along another layman as his assistant, John de La Lande, an experienced woodsman who had settled in New France before offering to help the Jesuits. The small party left Quebec Sept. 24, 1646. A few days into the trip they learned the Mohawks were on the warpath again. Only one Huron volunteered to continue with Jogues and La Lande. Meanwhile, the Mohawks in Ossernenon had suffered a crop failure and an epidemic, blaming it on the chest of vestments and books that the Jesuit had left behind him when he visited them as French ambassador. Warriors set out in search of some Frenchman to kill and were delighted when on October 17 they captured Jogues and his two companions.

The captors were beaten on their way back to Ossernenon where people cut strips of flesh from the neck and arms of the Jesuit. Some of the clans were friendly toward the missionaries and wanted peace with the French, but the war-like Bear Clan wanted to kill Jogues, which they did the next day when he was struck down as he entered a lodge. La Lande was advised not to leave another lodge where he was under protection, but he tried to slip out at night and was immediately killed by some warriors who were waiting to ambush him. The bodies of the two Frenchmen were thrown into the river while their heads were exposed on the palisades protecting the village.