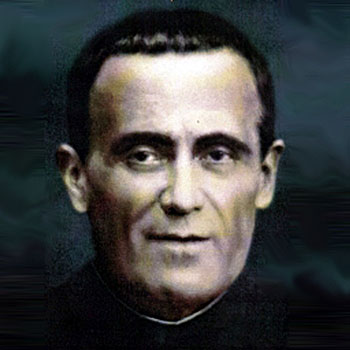 Father José Maria Rubio (1864-1929) has frequently been called “the apostle of Madrid,” which indicates not only the place where he long performed his pastoral duties but also underscores the far-reaching effect of his ministry. Born in Dalias (in Andalusia), Rubio studied philosophy, theology and canon law in the seminaries of Granada and Madrid, where he was ordained a priest in 1887. He worked in various towns in the diocese of Madrid and also in its seminary where he served as a teacher for several years.

From his seminary days he wanted to be a Jesuit, but for reasons beyond his control he had to be content to consider himself a “Friend of the Society,” as he liked to say. Finally he entered the novitiate in Granada in 1906, following a pilgrimage to the Holy Land, where he underwent deep spiritual experiences. From 1911 on he lived and worked in the Professed House of Madrid until shortly before his death in the province novitiate in 1929.

All those who gave witness to his life and ministry unanimously recognized that the people considered him a saint while he lived. On the day of his death many traveled to Aranjuez to see him for a last time. One of the national newspapers wrote: ''During the 18 years of his stay in Madrid, he won universal affection. He succeeded in becoming a popular, humble and modest priest so that his mere presence, both attractive and good natured, had the hallmark of a saint.

Schooled in the Spiritual Exercises, he lived as one ''sent'' by Him who has called him to work and to live with Him and like Him. His indefatigable activity, carried out in weak health, sprung forth from the experience of long, intimate hours spent with the Lord in chapel. Rubio’s loving and apostolic work was born in his interior spiritual life and nourished by his contemplation of Jesus poor and humble. His devotion to the Heart of Jesus explains the hours he spent in the confessional receiving prodigals who were looking for the embrace of the Father or in the patient hearing he gave the many people who came to him asking for advice.

This Jesuit of our time lived the full integration of the apostolic and contemplative life and presents a genuine Ignatian model for being a pastor in a large city. His preaching was simple, absent of any rhetoric, an expression of what he felt in his heart. During the sacrament of reconciliation Rubio showed the mercy and obvious goodness of God manifested in Jesus. He used to say to his penitents, ''Leave this to the mercy of God.''

In the poor, he recognized those the Lord preferred and gave them his energy and time, but above all he showed them his love and care. He was content to attend to what was urgent but he also took interest in the future of the young for whom he founded schools and prepared lay teachers to take care of them. He announced the good news of Jesus in the streets and plazas with popular missions. He constructed chapels and made the Church present in that misery. In his personal interpretation, Rubio anticipated the integration of service and faith and the promotion of justice as one, inseparable mission.

All who drew close to him became the focus of his attention. He welcomed equally the rich and poor, the employer and worker, members of the nobility and simple people. In them he found a son or daughter of God who needed pardon, bread, a listener, or advice. Frequently this welcome moved into spiritual direction and from it arose, as an exigency of faith, an invitation to serve the most underprivileged. Thus organized groups of men and women sprouted up around him and became collaborators in his numerous initiatives to help those in need.

Finally, one of Rubio’s characteristic ways of being a pastor according to Ignatian spirituality was his ''availability.'' He was always prompt to accept or abandon the works or projects on which he was working to follow his superior’s will. On these occasions, he was accustomed to say, ''Do what God wants, and want what God does.