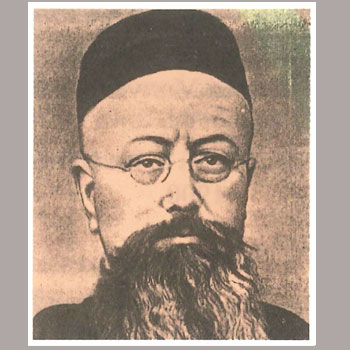 Modeste Andlauer (1847-1900) and Rémy Isoré were the first Jesuits to die in the movement to persecute Catholics and expel foreigners from China after the coup d'état of 1898 when the Dowager Empress Ci Xi imprisoned her nephew, the young Emperor Guangxu. China had signed a treaty with France in 1858 that allowed Catholic missionaries to re-enter China, and the Church steadily flourished there. Some people were hostile to Catholics because they did not participate in the public festivals honoring China's deities. The anti-Catholic and anti-foreign bias boiled over at the end of the century when a quasi-religious movement known as Yihe tuan began a systematic movement to destroy the Church. The English gave them the name by which they are best known, the Boxers, because strenuous gymnastic training was part of their preparation. During the violence known as the Boxer Rebellion approximately 30,000 Catholics were put to death.

The two Jesuits died together when Boxers attacked the mission at Wuyi. Father Isoré was born in France where he studied for the diocesan priesthood but he decided to enter the Jesuits before he was ordained. He entered the novitiate at Saint-Acheul in 1875 and was sent to China in 1882; after four more years of training, he was ordained a priest.

Father Andlauer was four years older than his compatriot and was born in the Alsace. He entered the novitiate in 1872 and was ordained a priest in France before setting out for China in 1882.

When the Boxer Rebellion began, Isoré was stationed in Weixian, in the Zhili district of Tianjin. He had left his mission to get a rest break at another Jesuit community when news arrived that Boxers were present near Weixin. Isoré did not want to leave his people alone in this moment of danger so he attempted to return to his own mission. When he got to the village of Wuyi, where Father Andlaeur was stationed, Isoré noticed the Boxer insignia on the village gate, indicating that they were inside. The Boxers had come to free some companions who had been captured and imprisoned there since the previous winter.

Isoré decided to stay with his brother Jesuit. The next afternoon the two Jesuits heard swords pounding on the door of their residence. They went into an adjoining chapel and locked the door behind them, but the Boxers easily broke through the outer door and then the chapel door. They found the two priests kneeling on the floor in prayer and attacked them with lances, killing them immediately. Then they beheaded them and displayed the heads of the Jesuits on the village gates as a brutal warning of what awaited Christians who did not return to their ancestral religion.