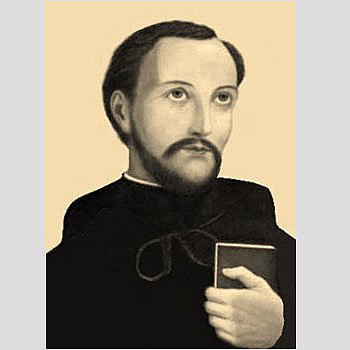 Noél Chabanel (1613-1649) was a successful professor and humanist in his native France, but he fervently wanted to be a missionary in New France and prayed to be accepted as a martyr. Once he finally reached the land of the native peoples, the reality of a missionary's life made him want to be anywhere else because he found the language incomprehensible and the native way of living revolting. Nevertheless, he embraced the difficulty by deciding to remain in the missions, even though superiors gave him permission to return to France. He saw his presence in the missions as God's will and vowed to remain firm, no matter how difficult it proved to be.

He traveled with the veteran missionary, Father John de Brébeuf from the winter of 1647 on, and worked among the Algonquins at Sainte Marie until he was sent to Etarita in the fall of 1649 to assist Father Garnier. Chabanel stayed at Etarita only a few weeks before Garnier judged the situation too dangerous and sent him back to mission headquarters. His escape from danger did not last long. He left Etarita on Dec. 5 and spent two nights at a nearby mission, and then set out with a party of Hurons on Dec. 7 on a difficult trek through 18 miles of thick forest. The party rested that night but was awakened by the sound of the Iroquois war party singing victory songs and the plaintive cries of their captives. This was the very party that had attacked Etarita. The Hurons decided to return immediately to the village they had left, which had been spared attack. Their Jesuit companion could not keep up with them, so at daybreak he decided to continue on to the mission headquarters as he had been commanded. When he reached a river too keep to cross, the Nottawasaga, 25 miles from Sainte-Marie, he waited patiently for help. A native man, who was actually an apostate Christian, came along and offered to carry him across in his canoe. Part way across the river, he killed Chabanel, robbed him and threw his body in the river. It was not until two years later that the man admitted what he had done and said he had acted out of hatred for the missionaries and their faith.