Father General in Lithuania: both brief and noteworthy

A visitation by Fr. General is a challenge for Jesuits and their colleagues try to show the General a representative sampling of the ministries that have become a part of their mission. Some Provinces and Regions will have several days to tour Fr. General around their land. For others, a visit could be as short as a few hours. For Lithuania, the 24 hours of the General’s visit was designed to maximize the time the General had with the people that the Province serves.

The General’s visit started on May 5th - Mother’s day in Lithuania - at the Church of St. Francis Xavier in Kaunas. Filled with flowers that were lovingly prepared for the mothers and grandmothers of the parish, St Francis was the perfect opportunity for the General to meet with parishioners who have called the parish their home for generations.

Archbishop Emeritus Sigitas Tamkevičius SJ celebrated the Eucharist and Father General delivered the homily. The voices of the 70-member Kaunas Jesuit School choir added the songs of the local community to the celebration.

After mass, Fr. General gathered with more than 70 representatives of various Ignatian groups at the gymnasium of Kaunas Jesuit School. Amid the sweet cacophony of music and laughter, Fr. General was able to meet CLC members, religious sisters, teachers and parents of Jesuit schools in Kaunas and Šiauliai, staff members of the Faith and Life Institute, and Jesuits from Riga, Latvia. 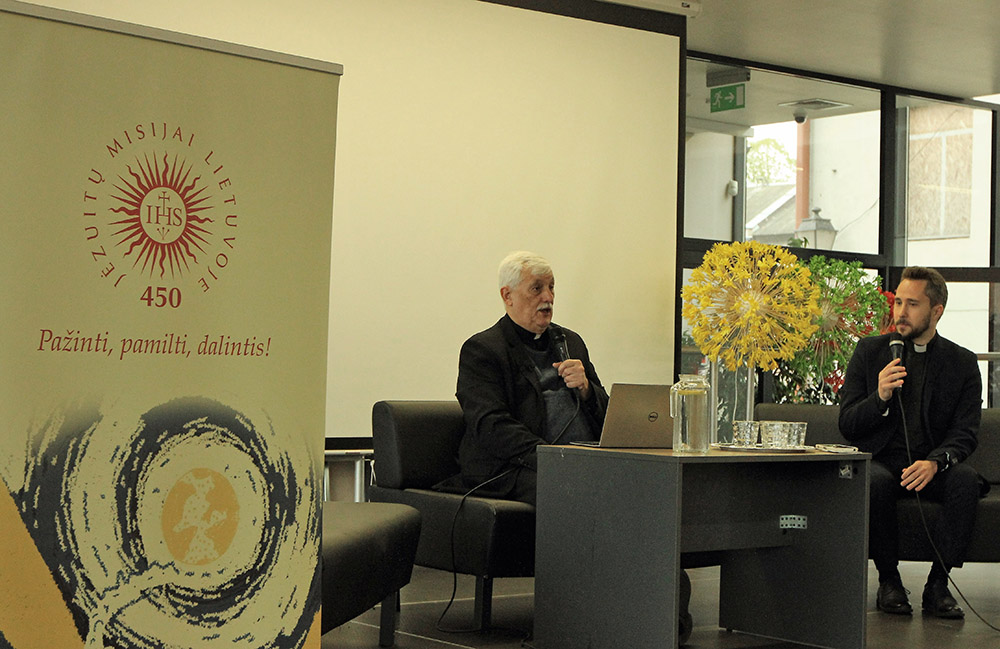 Later in the day, Fr. General traveled with Provincial Vidmantas Šimkūnas to meet with Catholic press and media representatives who wanted to cover the visitation. After a brief introduction by the Provincial, Fr. General was asked about the state of the Society of Jesus, both worldwide and within Lithuania.

Among the stronger themes that Fr. General stressed during the press conferences was the gift of the Spiritual Exercises. According to the General, the Exercises is a treasure that, when given properly, both allows Jesuits to accompany the faithful on their journey, AND gives the faithful powerful tools to discern their own way in a complex world. Reacting to a comment from a journalist who suggested that the Church does not make enough use of the Spiritual Exercises or the discernment process, Fr. Sosa alluded to the Holy Father’s talks and homilies which are grounded in the Spiritual Exercises and discernment. He also mentioned that the Exercises in contemporary life are conducted not only by Jesuits, but by lay colleagues who have internalized Ignatian Spirituality as a way to meet Christ and be transformed.

One of the topics that surfaced throughout the day was the rumoured reconfiguration of Jesuit Provinces in the area. On this subject, Fr. General offered that the Society‘s structure is deliberately flexible in order to best serve the mission, and that a man enters not a particular Province, but the worldwide Society of Jesus. He took the opportunity to mention that, always searching for better ways to serve, Jesuits look to collaborate with others, both in bringing others into the Jesuit mission and reaching out to collaborate in missions that are led by people of good will. In that context, now is a favorable time to develop networks, to use all means of communication and to adapt the structure of the Society to better serve God’s mission.

On Monday, May 6, Father Sosa moved on to the next step of this journey to Central Europe, Poland.

Share this Post:
A Q&A at the Vilnius Jesuit School
In Poland, Father Arturo Sosa talks about the Media
Posted by Communications Office - Editor in Curia Generalizia