Peace: we build it together

“We need peace! More peace!” Pope Francis addressed these exclamations to the international prayer meeting for peace organised in the very center of Rome by the Community of Sant’Egidio. This Community has made it its mission to keep up the “spirit of Assisi” ever since the time John Paul II visited there in 1986.

The meeting, which consisted of two parts, certainly attracted a lot of attention. First there was a time for formal prayer, which was celebrated in various places: Christians in the Aracoeli Basilica, Jews in the Great Synagogue, and Muslims, Buddhists, and followers of other religions in the halls of a nearby museum. The most moving moment of the ecumenical gathering was the lengthy enumeration of the thirty or so countries where armed conflicts are currently raging. A candle was lit in memory of the victims of each of these war zones.

In the second part of the event, all the participants gathered together in the Piazza del Campidoglio to affirm loudly and clearly, along with representatives of civil society, their aspirations for a world of peace. Among the participants was the President of the Republic of Italy, Sergio Matarella, who joined the religious leaders in signing the “Appeal for Peace,” which was proclaimed by a young woman on behalf of all the young people of the world. 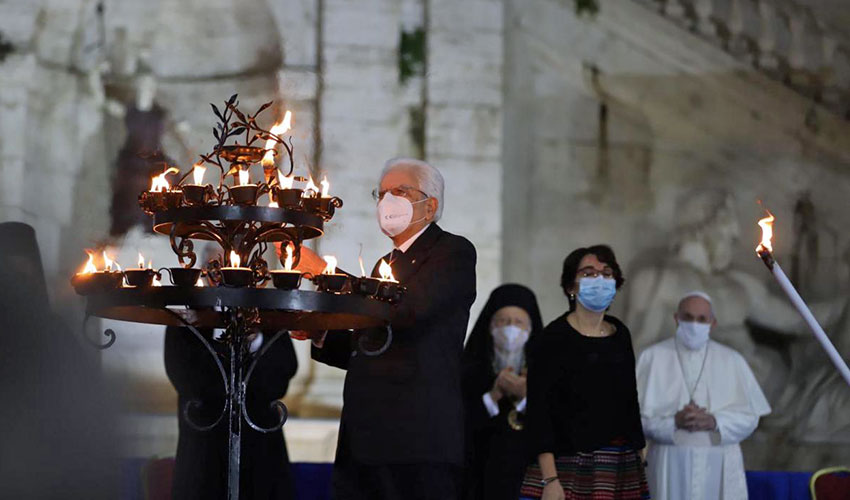 During this inter-religious gathering, many voices united to remind the “powerful” of this world that the inhabitants of earth, wherever they live, earnestly desire peace. A few key statements bore witness to this desire. Pope Francis emphatically insisted: “Peace is the priority of politics. Enough of the sword! Enough of weapons, violence, and war!” The Secretary General of the (Islamic) High Committee of Human Fraternity declared: “Truly, today’s wounded world needs to share bread in order to become more peaceful and secure.” Speaking on behalf of Imam Ahmad Al-Tayyeb, who could not travel to Rome, he exhorted the gathering: “Let us join together to heal the wounds of humanity and rediscover the values of mercy, justice and tolerance. Let us give back to people the smile torn from their face by wars and conflicts.”

Focusing on the ecological dimension of peace, Patriarch Bartholomew of Constantinople stated: “The time for fashionable environmentalism is over. The time for idealizing it or, worse, making it an ‘ideology’ is over. Now is the time for action.” The Chief Rabbi of France, Haïm Korsia, declared: “Our fraternity needs to engage in conversation, debate, sometimes even vigorous argument, but always with the hope of discovering the other, so that we can discover ourselves.” The founder of the Community of Sant’Egidio, Andrea Riccardi, echoed in his speech the spirit of the encyclical Fratelli tutti: “By not seeking to save ourselves, we open the way to shared visions and dreams about humanity. Thus do believers dream, and they also help others to dream; the sick, the refugees, those who need to be freed from poverty, and the victims of war, starting with children.” 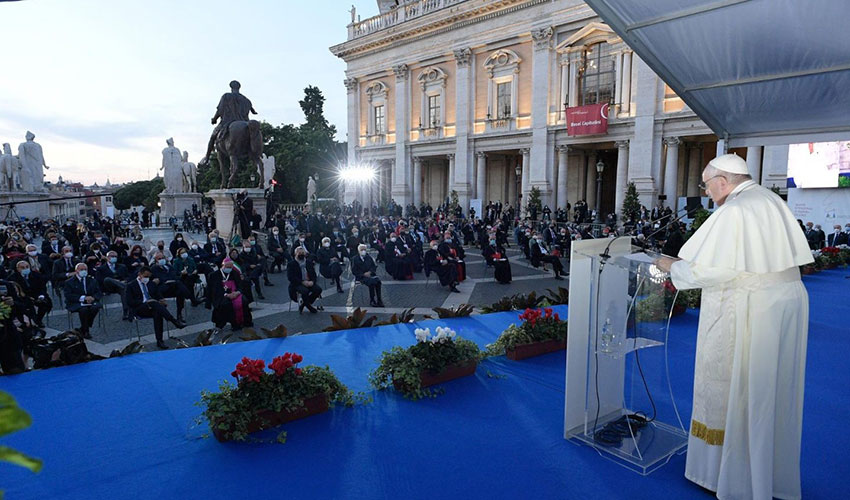 Why do we report this event as part of the news of the Society of Jesus? Because Pope Francis has asked religious congregations to make known the spirit and contents of Fratelli tutti. Since the beginning of the month, our website, our news reports, and our social media have been highlighting the thinking of Francis about the need for “social friendship” among all the world’s peoples. The eighth chapter of the recent encyclical is dedicated to the role of the world religions in the service of fraternity. It calls on us all to become aware that we are all “children of God” and that making God present in society brings great benefit to all. This global vision of Fratelli tutti, with its stress on the role of religions in favour of a better humanity, is in line with the Universal Apostolic Preferences of the Society of Jesus. We are called to encourage discernment and to promote the Spiritual Exercises; those are practices that will certainly lead us along the path of peace. For, as the theme of the meeting in Rome reminds us: “No one is saved alone”.

Pope Francis Peace
Share this Post:
“The pandemic: a challenge and a great opportunity”
The Good Samaritan: Life is full of journeys
Posted by Communications Office - Editor in Curia Generalizia