JCEP: a growing union of hearts and minds

Europe, a small continent in the middle of a vast world map, and, in it, so many nations and countries, a babel of languages, an enormous variety of cultures. Difference and richness. The Jesuit Europe reveals no lesser diversity. It guards the original places of Ignatian history: Loyola and Manresa, Paris and Rome, even Jerusalem is within the territory of the Conference. And it is blessed with a treasure of tradition, which all want to honour and sustain. Provinces both larger and smaller, with stronger or weaker institutional structures, look for new ways to sustain their main works and continue to serve their mission in the long term. All feel the challenge of fast diminishing numbers of Jesuits. Reality has been leading the Conference to a greater openness to closer collaboration and more extended sharing of responsibilities. A sense of common mission, though lived in very different religious and ecclesial contexts, and the experience of belonging to a larger apostolic body have been growing fruits of the regular Conference meetings.

The last General Assembly, that took place, online, from 9 to 13 October, in eight two-hour sessions, was a good step forward. In a final serene time of prayerful evaluation, the experience of consolation was unanimous: encouragement, enthusiasm, optimism, greater openness to the universal body, energy and commitment, inspiration, belonging… were the sentiments shared after the time together, listening and discussing, making decisions, sharing prayer and life. A somewhat surprising result, against the odds. The Conference had not been all together for a year, since the Assembly in Zagreb in October 2019. Out of the 19 Major Superiors, seven were new; the agenda was heavy and demanding; hour after hour with the eyes focused on a computer screen, trying to identify the speaker in the mosaic of faces, or following yet another PowerPoint in the shared screen. And everything in English, a language that for only two of the twenty three participants is the mother tongue. Yet the Spirit brought consolation and enthusiasm for the future. Although some blunt facts may be worrisome and many numbers depressing, the way forward is to let ourselves be led by the Spirit, through, but also over, the most pragmatic facing of reality. 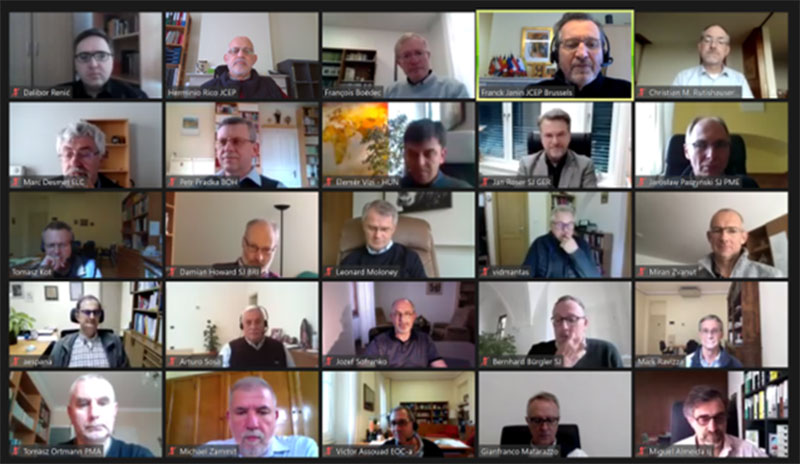 Father General participated in one of the sessions and urged all to take seriously the work of vocation promotion. The Assembly approved the priority calls for the JCEP Apostolic Plan and the first one is precisely: “to support and resource the vigorous promotion of the Jesuit vocation in Europe”. A vote confirmed the new Statutes for the Conference that are now with Fr. General for his final approval. There was time for reports by the directors of the Conference main works and networks: Jesuit European Social Centre; JRS-E with JRS International and JRS-Middle East and Northern Africa; primary and secondary education (JECSE), higher education (Kircher Network). Other topics to mention: accounts and budget, personnel needs for the Conference, formation centres, European tertianship and safeguarding.

Through hard work, but mostly by the action of the Spirit, the Assembly was a successful step forward in building unity of hearts and minds among the Major Superiors of the European Conference.

JCEP
Share this Post:
The Good Samaritan: Life is full of journeys
African Jesuits condemn the killing of school children in Cameroon
Posted by Communications Office - Editor in Curia Generalizia