Father Cassar: the Pope has sown peace and hope in Iraq

“This visit was a kairos, a moment of value, which goes beyond the immediate time in which we live, and which lies entirely in the hands of God,” comments the Maltese Jesuit from Sharya, where JRS accompanies displaced Yazidis. “I was reminded of Jesus’ travels, as he looks at the crowds of those so much in need, dare I say like sheep without a shepherd, and the Lord has mercy on them. The whole visit had a prophetic dimension, which for its relevance goes beyond the boundaries of what is now a very small Christian community: I believe that Pope Francis sowed seeds of hope and peace in this country - a country in which, over these four decades, so much evil has been poured: conflicts, bombings, Isis. So much evil, so much violence, so many people have suffered.”

Father Cassar had the opportunity to meet briefly with Pope Francis on Sunday as he prepared to celebrate Mass in Erbil, Iraqi Kurdistan, along with three confreres: Msgr. Antoine Audo, Chaldean bishop of Aleppo; Father Michael Zammit, Provincial of the Near East Porvince; and Father Antonio Spadaro, director of La Civiltà Cattolica. “My two minutes with the Holy Father were beautiful: he was very tired, almost exhausted, but also very, very happy.” Two years ago Father Cassar met Francis at the Vatican, during an audience granted to ROACO (Riunione delle Opere di Aiuto alle Chiese Orientali): “I had introduced myself to the Pope very briefly as a Jesuit working in Iraq,” he recounts, “and then he called me back and said, ‘Pray for me because I want to go there so much.’ And yesterday I heard that he was very happy to have made that visit.”

Francis’ visit to Grand Ayatollah Sayyid Ali Al-Husayni Al-Sistani in Najaf, a holy city of Shiite Islam, was “a gesture that mirrors St. Francis’ visit to the Sultan. The Pope did not go there for politics or diplomacy. For the Shiite community, the majority here, this visit was important to heal the many wounds that have been inflicted on Iraq by so many years of mutual suspicion between the various communities. The meaning of this meeting goes in the sense of what the Pope said: the peace of God is stronger than violence and war”. Thus, the fact that Prime Minister Mustafa Al-Kadhimi declared March 6 as the National Day of Tolerance and Coexistence in Iraq in memory of the pope’s visit to Al-Sistani and the subsequent interfaith meeting in Ur, “has enormous significance.”

The reception given to the Pope, “both by Christians and believers of other religions, was beautiful, everything worked very well,” says the Jesuit, who recounts meeting nuns, priests, and lay people from all parts of Iraq, all happy to participate in the concluding mass, joyous and energetic even after many hours of hard travel. “There were people who came from the district of Amadiya, on the border with Turkey, from Sulaymaniyya, there was Father Jens Petzold from the monastic community of Deir Mar Musa in Syria founded by Paolo Dall’Oglio, who is still missing, there were so many people and I could see on their faces an immense joy. Our Yazidi colleagues told me that they shared the joy of Christians, and so did Muslim colleagues who shared with us the joy of seeing the Holy Father in Ur, the ancient city of Abraham, or of seeing him enter Mosul, this city where all the cowardice of Isis has made slaughter even before the bombings.”

“Christianity in Iraq belongs to Iraq, it is not a foreign body. Christians have been in these lands since before Iraq was established as a modern state. Christians belong to these lands,” Father Cassar stressed, adding, “It is a great pity that this country has emptied itself of the Christian population. Those who stayed either consciously chose to stay or were stranded because they did not have the means to leave. I think that of all who are in the limbo of exile, in Jordan or Turkey or Lebanon, these in Iraq are not to be forgotten.” 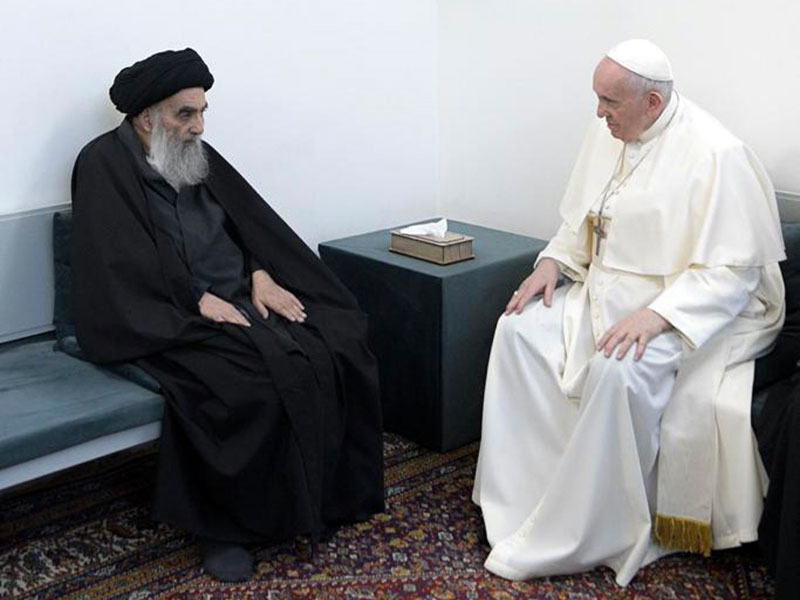 In Qaraqosh, a predominantly Christian city devastated by Isis, joy was mixed with astonishment: “The local head of JRS, Fadi Yabbo, told me that he never imagined that the Pope would visit this small town. “Abuna, Father,” he told me, “you have no idea what this has meant for me and all the people, more than Hoshana,” the greatest celebration of the Syriac Catholic rite, Palm Sunday, which is celebrated almost more vigorously than the Easter of the Resurrection, the whole city comes out with olive branches to make a large procession: yesterday it was like Jesus visiting our country, a joy that we cannot contain and whose fruits will be felt and experienced in the future.”

For Father Cassar, the first challenges to be faced are those related to the dire situation of the refugees. “During the Mass, the Pope said that there are visible and invisible sufferings: here,” explains the head of Jesuit Refugee Service in Iraq, “there are so many people who still suffer, physically and psychologically, after being displaced, kidnapped: for having seen relatives killed before their eyes - and not only during the presence of Isis, but also now. For example, the attack in the cathedral of the Syriac rite that was visited by Francis in Baghdad on the first day of the visit.”

A Maltese Jesuit, Father Cassar - who will be 60 years old on March 9, after 30 years of priesthood - was close to Father Pedro Arrupe who founded JRS. Since February 2016, Father Cassar has been the director of Jesuit Refugee Service in Iraq. “We are Muslims, Kurds, Arabs, Christians: foreigners we are only four.” 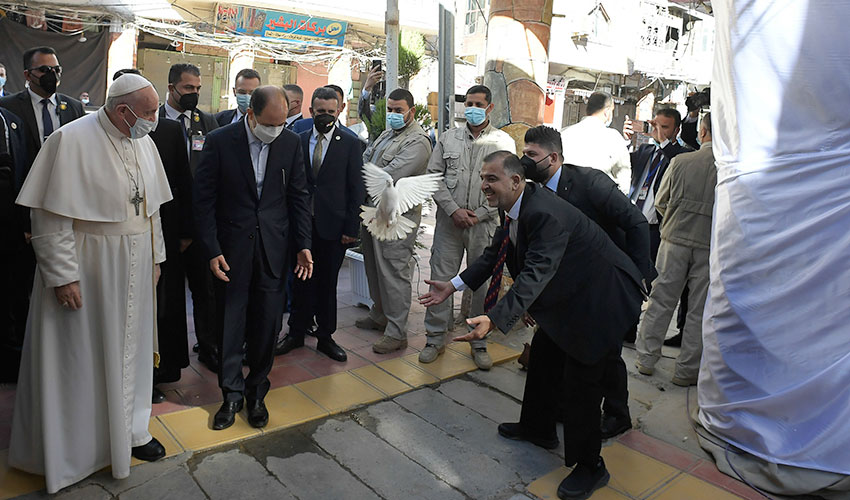 Also on the itinerary of the Pope’s visit is Sharya, where JRS accompanies displaced Yazidis. In speaking about the ministry, Fr. Cassar said, “with my regional director from Beirut, Daniel Corrou, and the Provincial of the Near East, Michael Zammit, we discussed with the head of the mental health program the many challenges that exist for the survivors of the Yazidi genocide in the Sinjar area of northern Iraq. There are teens, children, women who survived slavery by Isis, imprisoned, beaten, abused, even trained to fight. There are also those who managed to escape by going through northeastern Syria and entering Iraqi Kurdistan, and now they are either in refugee camps or outside them in a precarious situation. This is a situation that has been ongoing for seven years.” Father Cassar hopes to bring the lessons learned in Sharya to other places as well. “If the Yazidis who survived the genocide manage to return to Sinjar, I would like us to be able to accompany them.” And again, “I still dream that JRS can go to Mosul to help in rebuilding peace. For many reasons, related to access permits, so far it has not been possible”.

For the Maltese Jesuit, the central point is always “to ask oneself, through discernment: Lord, where and in whom do you want JRS to serve you?”.

Hence the hope that the seeds sown by the Pope will flourish. “I hope that there will be a greater openness to one another, I hope that we can undertake common initiatives among religions to respond to the needs of those who are most in need in this country - doubly hit in 2020, by the pandemic and its economic consequences, and by the economic disaster triggered by the collapse of oil prices. People are suffering, those who are not paid wages are suffering, those who depend on daily work are suffering. That is why I hope that we can take common steps to help the neediest among us. I hope that the Pope’s message that we are all brothers and sisters permeates the hearts of people of good will.” Father Cassar, who stresses that he spends half of his time and apostolic zeal on resolving bureaucratic issues, points out that the government office for non-governmental organizations in Baghdad has in recent days replaced its WhatsApp profile with the logo of the Pope’s visit. “This is also a gesture of welcome and openness. The Lord acts in the hearts of all, beyond the boundaries of the Church, and there are people who have open hearts. I hope that this visit touches the hearts of many people.”

Pope Francis Interreligious dialogue
Share this Post:
The sacrament of reconciliation – The Pope Video
8 March 2021: It’s Women’s Day for the Jesuits too!
Posted by Communications Office - Editor in Curia Generalizia

Pope Francis will commemorate the 400th anniversary of the canonization of St Ignatius of Loyola, founder of the Society of Jesus, and four other saints...