27 April is the feast of St Peter Canisius, one of the first Jesuits, who is especially remembered this year on the occasion of the 500th anniversary of his birth. Because of this, 27 April is the date chosen by the Society of Jesus for the creation of the new Jesuit Province of Central Europe. Canisius worked mainly in the regions that are part of this new Province. In Nijmegen, where he was born, pilgrimages are being organized from 2021 to 2023.

The town of Nijmegen, founded by the Romans, was the capital of the duchy of Gelderland at the end of the Middle Ages. On 8 May 1521, Jelis van Houweningen and her husband Jakop Kanis had their first child, Peter. Two sisters would follow but their mother died. Jakop would marry again and add eight or nine siblings to the household. One of Peter’s half-brothers eventually would become a Jesuit too. Peter went to the Latin school, lived for some time at the boarding school of the Brothers of the Common Life, and went abroad, when he was fifteen, for higher studies in Cologne and Louvain. As a student he loved to visit the Carthusians, to talk with the prior and pray in their silent church. He pursued studies in theology and worked on a German edition of the sermons of Tauler. In 1543, he travelled to Mainz and did the Spiritual Exercises under Peter Faber. At the end of the Fourth Week he followed the Call of the King and entered the Society of Jesus.

During his novitiate, he continued his studies in theology. At the end of 1544, he was called back to Nijmegen where his father lay dying. With his inheritance, Peter assisted poor students and rented a house in Cologne where he started a formation community with two Spanish priests, a Belgian student and a nephew of Ignatius, Aemilian Loyola. This type of ‘college’ for lodging scholastics without formal relationship to the university already existed in Paris, Louvain, Coimbra, Valencia, and Alcalá. Later that year, 1545, Peter was summoned by two fellow Jesuits, LeJay and Bobadilla, to the Diet of Worms, where the voice of the Lutheran princes and representatives was louder than the Catholic voice. Back in Cologne, Peter was busy with his studies in theology, the editorial work on patristic texts, writing letters to family and friends, and the preparation of an informative book for the Emperor, who would visit the city in August. 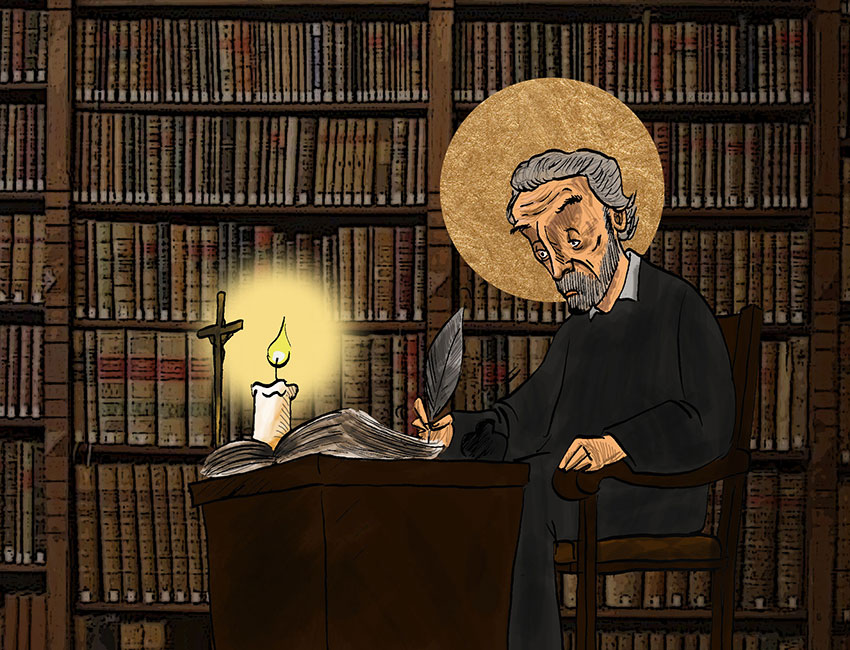 Formally a novice, Peter maintained contacts with key people in politics and the Church. At home, he would live the simple life of a community man. He would pray every day, spend some time on research and writing, would find ways to finance his community and its apostolic work. In June 1546, he was ordained a priest. Afterwards he travelled south: Ulm, Trent, Rome, where Ignatius took care of the final stages of his formation. He was assigned to Sicily where he was involved in the founding of the first college for boys run by the Society. Back in Rome, on 4 September 1549, in the church of Santa Maria della Strada, he pronounced his final vows before St Ignatius. Just seven years a companion, he found himself fully admitted to the core of the Society. He next obtained his doctoral degree in theology at the University of Bologna and set out for Bavaria. He arrived before Christmas and started to work with two fellow Jesuits at Ingolstadt University.

At the age of 28, having had a strong spiritual and academic formation, he would become university professor, university rector, provincial superior, cathedral preacher, and, most of all, founder of schools (“colleges”). He would greatly influence the development of the Jesuit Order in Northern Europe.

A characteristic of Peter was his keen appreciation of the efforts of other people. With fellow Jesuits, city councillors, and parents he started colleges for boys in Ingolstadt, Vienna, Prague, Strasbourg, Trier, Freiburg-en-Brisgau, Zabern, Dillingen, Munich, Wurzburg, Innsbruck, Molsheim (Alsace,) and Fribourg (Switzerland). The list might not be complete! His design was to offer free education for Lutherans, Catholics, and Jews. He was born in a world of religious strife. He grew up in an atmosphere of animosity and Protestant rebellion. But, young and dashing, Peter won the hearts, minds, and spirits of all. He interacted with Melanchton and other leaders of the Reformation. He never preached against them. He wrote bestselling books such as the Catholic Catechism with editions for children, for adolescents, and for adults. He was 77 when he died. His Jesuit life had been entirely devoted to the Lord, offering all his teaching, entrepreneurial activities, and theological abilities to His Holy Name.

JCEP Jesuit Saints
Share this Post:
To respond to the vocation appeal, focus on St Joseph
Something new for “Central Europe” – a truly multicultural Province
Posted by Communications Office - Editor in Curia Generalizia