The Pope celebrates mass for Myanmar and with Burmese

Pope Francis has accepted the invitation to celebrate a special Mass for the people of Myanmar. Jesuit student P. V. Joseph Buan Sing said, “We are delighted that the pope has accepted our invitation. We sent him a letter about a month ago and were hoping, above all hopes, that would say ‘Yes’. We knew his heart was close to Myanmar and now he has said that he is willing to celebrate Mass with us.” Indeed, since the coup d’état at the beginning of February, Pope Francis asked the faithful, several times, to pray for the people of that country. He did it during masses and audiences as well as at the end of the Sunday Angelus.

This time, Pope Francis’ mass on the feast of the Ascension, on Sunday 16 May, will bring people from Myanmar who live in Rome and elsewhere in Italy to St. Peter’s Basilica at 10 AM. Those who have been closely associated with the country over the years also received an invitation. “Because of social distancing and the pandemic, says P.V. Joseph, there would not be as many people as we would like, but Vatican Media will stream, live, the celebration and everybody, through the internet, can then take part of this prayerful event”.

The programme of the Eucharist, that has been prepared with the pope’s Master of Ceremonies, Mons. Guido Marini, will include readings and songs in Burmese and a local dialect, the language used in the area of Kalay, where P.V. Joseph’s family live. 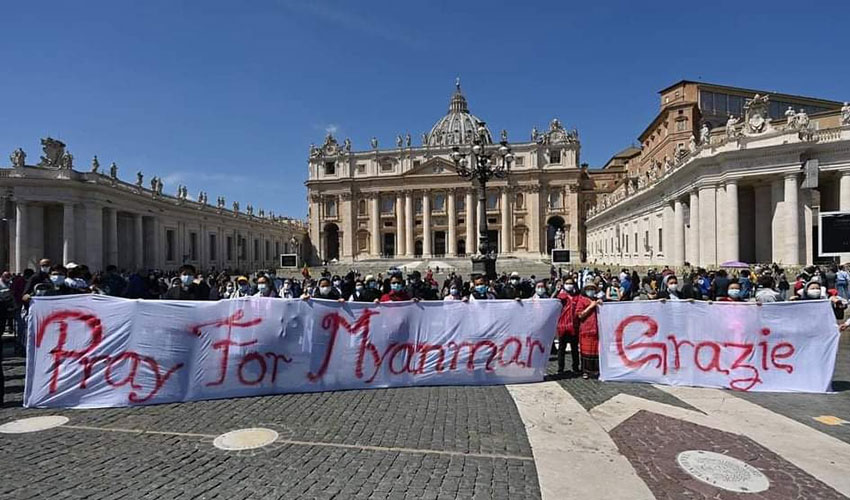 When the Jesuit scholastic thinks of his families nowadays, he cannot avoid to be worried. He says, “They are under a lot of pressure. They live in a quite remote part, but even in that area there have been some killings. The military have been very harsh during all of this transition. We really pray that peace and democracy can return.”

Why would have Pope Francis agreed to P.V.’s and his friends request? The pope has a clear preferential option for the poor and those who suffer injustice. Of course, Myanmar is a poor country which he has visited in 2017; so he follows closely the situation of the people over there. Presiding this mass, he clearly manifests that he is truly a good shepherd and he shows his paternal love.

P.V. and his friends, especially scholastics from Asia who are studying in Rome, have helped the Myanmar youth through online spiritual talks during the past few months. They have organized groups of spiritual conversations or “breakout rooms in Zoom” that they call Magis Circles. Since the coup d’état in February, they have held five times these online gatherings; participants are mainly living in Myanmar but could also be from the diaspora. They are united through prayer with the Jesuits and their partners who, in Myanmar, are directly involved in helping the poor and suffering, for instance by collaborating with medical teams of doctors and nurses who help the victims during or after the protests.