In the context of the beginning of the Ignatian Year, Father General Arturo Sosa had the pleasure of receiving a work of art by an internationally renowned sculptor, Johan Tahon. The presentation was made at the General Curia on Tuesday 11 May.

The statue, entitled Metanoia, represents the experience of Ignatius of Loyola, in particular his conversion. Johan Tahon explained to Father Sosa the origin of the work. In contact with the Jesuits in Flanders, he was touched by Ignatian spirituality. With the Flemish Jesuit Jan Koenot, he was able to visit Ignatian places in Spain, especially where Saint Ignatius began his journey of conversion. This inspired him to present a character in pain (his leg injury), but also in reflection (the Manresa experience) as he lets himself be transformed by the Holy Spirit.

The work is made of sandstone and covered with a varnish that is resistant to all temperatures; it can be displayed both indoors and outdoors. During the coming year, the plan is to exhibit the statue in various Jesuit places in Rome where a wider public will have the opportunity to appreciate it. It is worth mentioning that on the eve of his meeting with Father General, Johan Tahon had the pleasure of presenting a copy of the same Ignatian sculpture to Pope Francis himself. 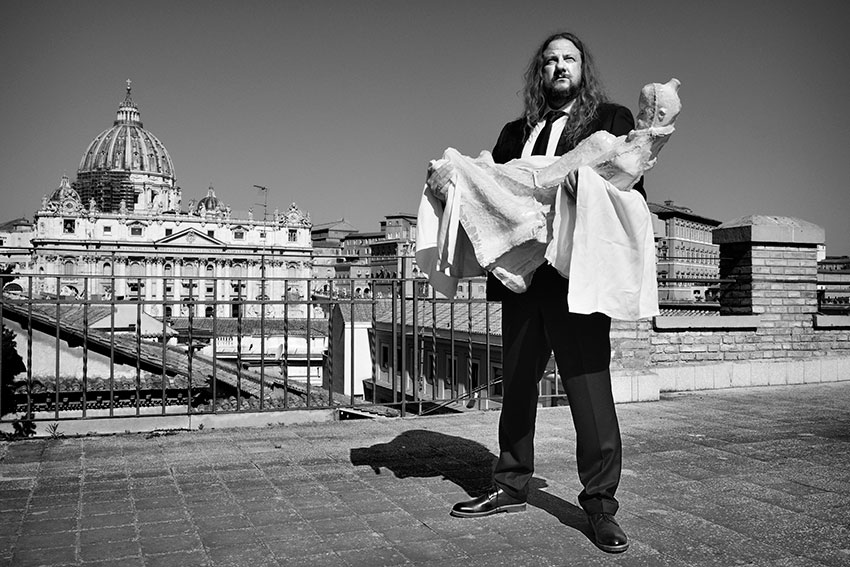 Johan Tahon is a Belgian artist, born in 1965. In his own words, he did not become a sculptor, but has always been one. Sculpture is like breathing. He studied at the Royal Academy of Fine Arts (KASK) in Ghent. He lives and works in Belgium and Switzerland.

Most of his works are sculptures in stoneware, some are in bronze. He first gained a solid reputation in his home country, in the Netherlands and in Germany. Thanks to his frequent participation in international exhibitions, he is now well known in various countries. Some of his works are displayed in public spaces. A few years ago, he won a competition organised by the Lutheran Church in Hanover to create a work commemorating the relationship between church and synagogue throughout history.

Father General Curia
Share this Post:
Pilgrims with Ignatius
The Pope celebrates mass for Myanmar and with Burmese
Posted by Communications Office - Editor in Curia Generalizia