Pope Francis will commemorate the 400th anniversary of the canonization of St Ignatius of Loyola, founder of the Society of Jesus, and four other saints - the first collective canonisation in history - by celebrating a Mass in the Church of the Gesù, in Rome, next Saturday 12 March.

The Eucharistic celebration, broadcast in several languages via live streaming by Vatican Media and on the ignatius500.global/live page, will begin at 5pm (UTC+1).

Pope Francis’ Mass is set in the context of the Ignatian Year (20 May2021 - 31 July 2022) that the Jesuits are celebrating 500 years after the conversion of St Ignatius of Loyola.

“We mark this step in the journey of the Ignatian Year to confirm ourselves in the possibility of a holy life,” declared the Superior General of the Society of Jesus, Fr Arturo Sosa. “Recalling, four hundred years later, the recognition made by the Church of the holiness of five people as different as Ignatius of Loyola, Teresa of Jesus, Philip Neri, Isidore the Laborer and Francis Xavier encourages us, without a doubt, to continue on the path of conversion proposed for this year.

This celebration at the beginning of Lent 2022, while the consequences of the Covid-19 pandemic are still present and while we call for weapons to be silenced in order to open up spaces for dialogue leading to reconciliation, justice and peace, aims to help us to deepen our encounter with Jesus Christ. Let us continue the journey together with the whole People of God towards the holy life to which the Lord himself invites us and on which the Virgin Mary and the saints who precede us along the way accompany us.” 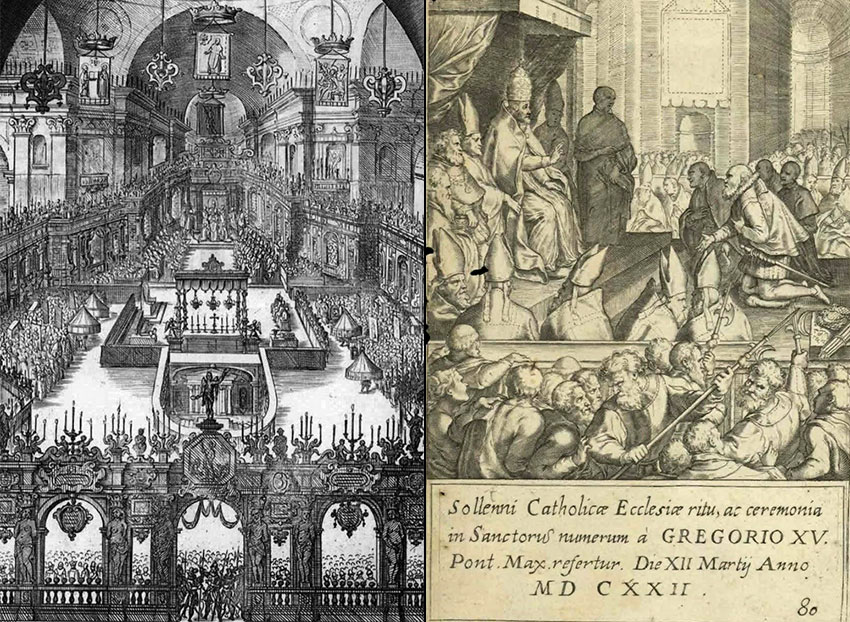 The celebration of 12 March 1622 was a novelty in the history of the Catholic Church. It was the first collective canonization. Until then only individual saints had been canonized. In St Peter’s Basilica, Pope Gregory XV proclaimed the holiness of Ignatius of Loyola (1491-1556), founder of the Jesuits; Francis Xavier (1506-1552), a missionary and one of Ignatius' earliest companions; Teresa of Jesus (1515-1582), a religious and mystic, founder of the Discalced Carmelite nuns and friars; Philip Neri (1515-1595), priest, founder of the Oratorians; and Isidore the Laborer (1079-1172), the only layman of the group and patron saint of Madrid, whose canonization, supported by the king of Spain, was the first to be decided. With that ceremony, the pontiff of the time recognised the key role assumed by the new religious orders in evangelization.

The Church of the Gesù (its full name is the Church of the Most Holy Name of Jesus all’Argentina) is the mother church of the Society of Jesus. It houses the tomb of St Ignatius of Loyola. Pope Francis already celebrated mass there on 31 July 2013, on the feast of St Ignatius. He returned on 3 January 2014 to preside at mass to commemorate the Most Holy Name of Jesus, the titular feast of the Society of Jesus, and in thanksgiving for the canonization of the first Jesuit priest, Peter Favre. The liturgical celebration on 12 March, which will take place on Saturday starting at 5pm (UTC+1), will follow the liturgy of the second Sunday of Lent.

Eucharist for the the 400th anniversary of the canonisation of St Ignatius of Loyola and St Francis Xavier. Church of the Gesù in Rome, Italy.
12 March 2022
5pm Rome (UTC+1)