As I read over Fr. General’s letter to the whole Society regarding the Universal Apostolic Preferences, I could not help but think he had actually been directly accompanying our work at the Jesuit Restorative Justice Initiative (JRJI) over the past few years. Three of the four Preferences connect directly to what this work of the Society is about:

To show the way to God... JRJI offers Ignatian retreats, counselling and spiritual direction to incarcerated prisoners all up and down the state of California;

To walk with the poor, the outcasts of the world... No one is more of an “outcast of the world” than the incarcerated, whose dignity and worth has been stripped of them as they serve their time in prison;

To accompany young people in the creation of a hope-filled future... The vast majority of prisoners whom JRJI serves are youthful offenders, some of whom have little hope of being released any time soon.

For me, the best way to see how the UAPs apply to our work is to take the example of Jaime. He had been one of the prisoners who faithfully did the “inner work” with our JRJI staff members over many months. Jaime later wrote, “It had been 27 years since I had stepped into a Church when I attended my first JRJI retreat at Calipatria Prison. My heart was full of anger and resentment even though I had been raised Catholic... I had turned my back on the Church and my upbringing, but something about Fr. Mike inclined me to attend this retreat. Fr. Mike and I spoke. I shared a little bit about myself and my story, and the dialogue was pleasant - never felt forced or awkward. I kept attending the retreats until the very last one on the Monday before I was paroled.”

On that Monday before he was released, the men participating in the Ignatian retreat with Jaime went around in a circle and shared out loud what Jaime had meant to them. They had all been working together to come to a realization of why they were in prison, what kind of healing and reconciliation was needed in their lives, and how to translate that realization into a more positive future. Using Ignatian Gospel meditations, and answering questions related to their own healing, Jaime and the other prisoners share their experiences in a group setting, which gives them the needed support to continue in their healing process. 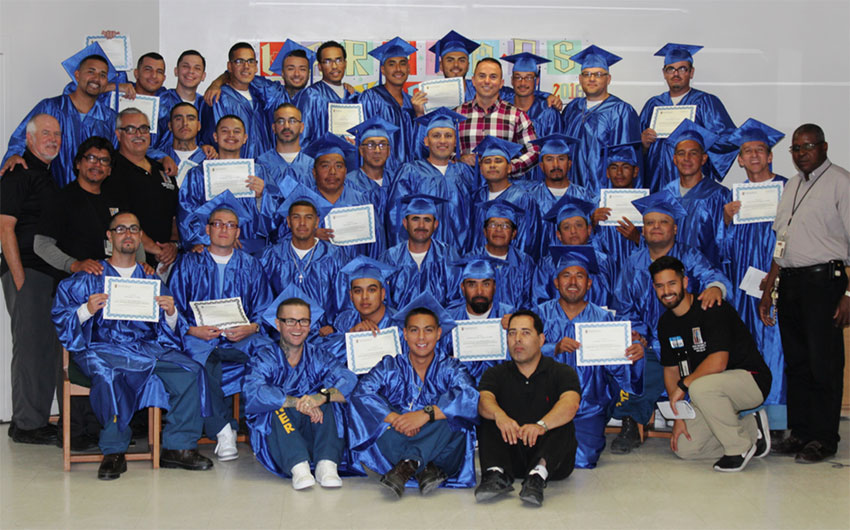 The next morning, after 31 years in prison, including 18 years in solitary confinement, Jaime was out having breakfast with his aunt at a Denny’s Restaurant in Lancaster, CA. He didn’t own much but he had the keys to a new apartment. I wondered to myself what Jaime thought as he walked into that new apartment. He told me that he was so excited that all four of the keys ended up on the floor - he wasn’t sure how to use them. It had been 31 years since he has had keys that unlocked doors.

Two days before, we had been sitting in a Level Four Prison, and now we were eating Buffalo Wings together. The waitress intuited that Jaime had just gotten out of prison, so she was attentive to our group and served up a platter that included shrimp, cheese sticks, and even some lobster; all of it on the house. He was all smiles and even took some pictures with the waitresses.

I suppose it would be easy to chalk up that meal to just something ordinary on a Wednesday night in the month of March, in an ordinary restaurant, in an ordinary city. But looking back on that meal, I believe something extraordinary had occurred. Jaime is a symbol of what our work is about; he is a symbol of what JRJI has been doing in the prison system during these last 10 years. His happiness is manifested in the long journey of doing his own inner work. That simple meal was a resume of what we do: helping prisoners participate in the hard work of forgiveness and transformation.

As I write this, we are surrounded with fear and some panic from the coronavirus pandemic. Although this has only been going on for a few weeks, people are acting as if it is the end of the world. As you walk around during these days of the virus, there are no church services, no movies, no embraces, no shaking hands, no gatherings of more than 10 people. Everything is different.

And right now, everything is different for Jaime. I think of how different Jaime’s life is now after 31 years of not having any of those things that we take for granted. Jaime is one person whose life changed in prison, and now it has changed even more since his release. It seems that the world as we know it is changing all of us as well: from something that we were so comfortable with, to the uncertainty, the fear of the unknown. Will this moment bring out the best in us or the worst of who we are?

Jaime brought back some cheese sticks to his new apartment. Everything is delicious for him.Everything is new.

Journeying with Youth Walking with the Excluded Universal Apostolic Preferences SJES
Share this Post:
The Feast of the Heart of Jesus
Pathways of conversion towards religious life
Posted by Communications Office - Editor in Curia Generalizia