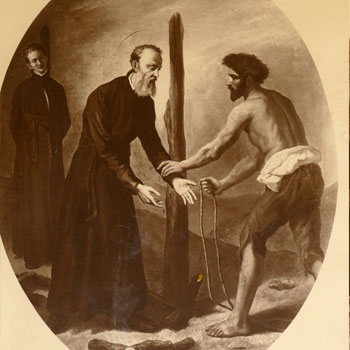 Girolamo De Angelis (1567-1623) and Simon Yempo (1580-1623) worked together as a team ministering to Christians during the persecution of the Shogun Iyemitsu. De Angelis was born in Sicily and studied law in Palermo before his experience making the Spiritual Exercises led him to enter the Society in 1586. Just as he was finishing his theology studies, he was assigned to the Japan mission. Together with Father Carlo Spinola, another future martyr, he left Genoa for Lisbon. The voyage took them six years because of a series of catastrophic storms. The ship from Genoa hit a rock and had to return to port. Once they arrived in Barcelona, they walked all across Spain. Then they left Lisbon on a ship whose rudder was shattered in a storm near Brazil; the ship eventually drifted back across the Atlantic to its starting point. On the next attempt English pirates captured their ship and took it to England. They eventually made it back to Lisbon two years after setting out.

De Angelis was ordained to the priesthood before finally setting off the third time in March 1599. He arrived in Nagasaki in July 1602 and was sent to central Japan to establish a center for missionary activity in Sunpu (now Shizuoka). Later he was sent to Edo (today's Tokyo) to set up another center. He worked for 12 years before the Edict of 1614 outlawed Catholic missions. While most Jesuits left Japan, Father De Angelis went underground, disguising himself as a merchant and ministering the sacraments at night.

The catechist Simon Yempo joined the Jesuit during this clandestine period. Yempo was born in Nozu, Kyushu and entered a Buddhist monastery as a youngster; he became a Christian when the head bonze converted in 1596. He enrolled in a Jesuit seminary two years later. His firsthand knowledge of Buddhism helped him explain Christianity to his countrymen. Initially he went into exile when the missions were outlawed, but he returned and offered his help to De Angelis.

As the persecution of Christians continued, many sought refuge in remote areas like the northern part of Honshu Island or Hokkaido. Priests followed their flocks, so De Angelis and Yempo became the first missionary to preach in Oshu and Dewa, in 1615. They ended up in Yezo and remained there until 1622, living in relative peace because of the distance from the central government. When the Italian Jesuit was ordered to return to Edo, he once again went underground and carried out his ministry at night. During this period Simon Yempo became a Jesuit brother.

A dissatisfied Christian betrayed the two Jesuits in November 1623, but soldiers could not find them in the house where the informer said the religious were staying. The owner of the house was arrested, along with 47 Christians. De Angelis and Yempo decided to turn themselves in and win their host's release. They were sent to separate prisons where each converted a good number of their jailers. In early December the shogun ordered their execution by slow fire. Fifty prisoners were taken outside the city on December, including the two Jesuits and a Franciscan missionary. All were burned at the stake, encouraged by De Angelis, who was among the last to die.