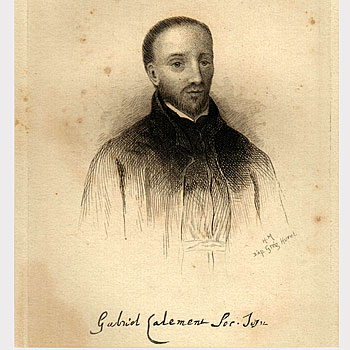 Gabriel Lalemant (1610-1649), a Jesuit at 19 and a priest at 27, was a scholar, professor and a college administrator, delicate in body but strong in desire for the mission of Huronia. After seven months there he was able to speak the native language. He was assistant to John de Brébeuf for one month and then his companion in martyrdom for 17 long hours.

Inspired by the example of his uncle, a missionary in New France, Gabriel Lalemant desired to be a missionary himself and took a special vow to devote himself to the missions when he pronounced his vows at the end of the novitiate. Despite his enthusiasm, his mission was teaching. Every year he requested the missions, and every year he was refused, probably because of his weak health. Finally, his petition was accepted, probably through the intercession of another uncle, a Jesuit who had just been made superior of the missions.

On June 13, 1646 Lalemant set out with three other Jesuits from La Rochelle, France, and reached Quebec on Sept. 20. Before he could begin his actual pastoral work, he spent two years learning the Huron language and customs. Finally in August 1648 he set out for Sainte-Marie, the mission headquarters, with a party of Hurons who had come to Quebec to trade furs. He devoted another few months to language study and then in early 1649 started accompanying Father John de Brébeuf on a weekly schedule of visits to neighboring villages. Despite the years of asking to become a missionary and his thorough preparation for the work, his actual ministry did not last long before he was called to add his sacrifice to the one he celebrated daily in the Mass.

Only six months after he came to Sainte-Marie, he set out with Brébeuf for the village of Saint-Louis. During the night the Iroquois attacked another village not far away, and the two Jesuits knew that Saint-Louis would probably be next. On the morning of March 16, the Iroquois attacked the Huron village and easily overcame the defenses. The two Jesuits were taken prisoner because they had refused to flee into the forest before the attack. Attackers pulled out the finger nails of the two Jesuits and chewed their fingers before forcing them to run naked through the snow to a another village where other Iroquois warriors waited. The captives had to run the gauntlet and then the two Jesuits were led to two posts where they were to be killed. Apparently Lalement had to watch the torments that Brébeuf suffered before the time came for his own torture at six in the evening. His tormentors set a fire around his feet, then burned him with heated metal hatchets and poured scalding water over his head. After they cut off his hands and gouged out his eyes, they placed hot coals in the sockets. Then they stopped for the night so that their victim could endure another day of torture. The next day they shoved burning wood into his mouth and sliced off his tongue, but Father Lalement proved as courageous as his Jesuit companion and refused to shriek for mercy. Finally, they tore his heart out and ate it to gain his courage. The young Jesuit, only 36 years-old, died after 15 hours of unbelievable torment. Together with Brébeuf, his body was buried near the chapel door at Sainte-Marie.