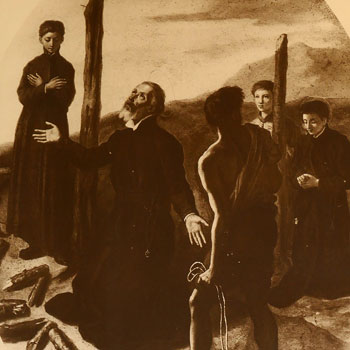 A Jesuit priest and the two Japanese catechists who assisted him were captured during the great persecution in early 17th-century Japan. A native of southern Italy, (1560-1622) Pietro Paolo Navarra went to Goa, India in 1584 where he was ordained a year later. In August 1586 he arrived on the island of Hirado in western Japan and studied language for a year before beginning pastoral works in Shikoku and Honshu. Father Navararealized that he must become like the Japanese to be successful in evangelizing them so he became fluent in speaking and writing, adopted a Japanese form of dress and followed their customs of living.

When a local persecution against Christians forced Navarra to move, he settled in the kingdom of Bungo in northern Kyushu. But when Shogun Iyeyasu's 1614 edict ordered all foreign missionaries to leave, Navarra was one of the two dozen Jesuits who chose to remain and work underground. For the next seven years he went around the province of Shimbara disguised as a farmer, tradesman, wood seller or beggar—whatever would allow him to reach Christian homes where he could administer the sacraments. He knew he was being hunted, so he only moved at night. During his days he composed the Japanese text of a book called, "An Apology of the Christian Faith against the Calumnies of the Pagans."

Two catechists accompanied Nararra. Peter Onizuka (1604-1622) was a teenager whose father housed the fugitive priests. Dennis Fujishima (1584-1622) was almost 40 and had become a Christian as a young man. Onizuka and Fujishima were with Navarra after Christmas in 1621 when priest-hunters apprehended them along with Navarra and his servant, Clement Yuemon, and delivered them to the daimyo of Arima who respected his captives, although they were clearly guilty of spreading the proscribed Christian religion. The daimyo offered to free them if they would renounce Christianity, an offer they turned down. He wanted to transfer them secretly to Macao where they would be set free, but before he could act, orders came from the shogun that the three were to die by slow fire.

On November 1, the day of execution, Father Navarra celebrated the Mass of All Saints and accepted the Jesuit vows which Onizuka and Fjishima professed during the Mass. All four men were tied to stakes, but did not suffer prolonged agony because the daimyo had instructed the soldiers to place the wood so the fire would burn quickly.