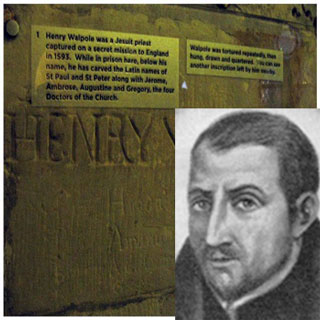 Henry Walpole (1558-1595) was inspired by the courage of the Jesuit martyr, Edmund Campion, to become a priest for his native England. He was arrested, however, almost as soon as he set foot on English soil and spent more time being tortured in prison then some Jesuits spent ministering the sacraments. Walpole had been born Catholic but was not sure which direction to follow in the religious controversy that roiled England. He attended the discussions that Campion held with Anglican divines and was present at the Jesuit poet's execution. A drop of Campion's blood fell on his clothes from the martyr's quartered body, confirming his sense that God was calling him to follow in Campion's footsteps. He even wrote a poem honoring the dead Jesuit.

Walpole studied at Cambridge and then moved to London to study law, but then changed direction and decided to become a priest. He entered the English College in Rheims, France in July 1582 and then moved to Rome nine months later. On Feb. 4, 1584 he joined the Society of Jesus and completed his studies at the Scots College at Pont-à-Mousson, France. After he was ordained in Paris, he was assigned to be chaplain to English Catholic refugees serving in the Spanish army in the Low Countries.

He spent a year in prison after he was captured by the Calvinists in 1589, and then worked at the English seminary in Valladolid, Spain until he was finally asked to return to England in 1593. The Jesuit, his brother and an English soldier sailed together on a French ship headed for Scotland because the southern ports of England were closed because of the plague. On Dec. 4, 1593, the three passengers were put ashore at Flamborough Head, Yorkshire, after 10 days of stormy sailing, but separated on land. Father Walpole was resting at an inn 10 miles inland when he was arrested for being a priest; he had been betrayed by a fellow passenger who was earning money to buy his way out of prison.

One night of freedom in England was followed by 16 months of imprisonment. Walpole admitted during his first interrogation that he was a Jesuit and had come to England to convert people. He was transferred to York Castle for three months, and was permitted to leave the prison to discuss theology with Protestant visitors. Then he was transferred to the Tower of London at the end of February, 1594, so that the notorious priest-torturer Richard Topcliffe could wrest information from him. Walpole was tortured brutally on the rack and was suspended by his wrists for hours, but Topcliffe stretched the tortures out over the course of a year to prevent an accidental death.

Walpole endured torture 14 different times before being returned in 1595 to York to stand trial under the law that made it high treason for an Englishman simply to return home after receiving Holy Orders abroad. The man who had once aspired to be a lawyer defended himself ably, pointing out that the law only applied to priests who had not given themselves up to officials within three days of arrival. He himself had been arrested less than a day after landing in England, so he had not violated that law. The judges responded by demanding that he take the Oath of Supremacy, acknowledging the queen's complete authority in religion. He refused to do so and was convicted of high treason.

On April 7, Walpole was dragged out of York to be executed along with another priest who was killed first. Then the Jesuit climbed the ladder to the gallows and asked the onlookers to pray with him. After he finished the Our Father but before he could say the Hail Mary, the executioner pushed him away from the ladder; then he was taken down and dismembered. The Jesuits in England lost a promising young priest whom they had hoped would take the place of Father Southwell; they received another example of fidelity and courage.