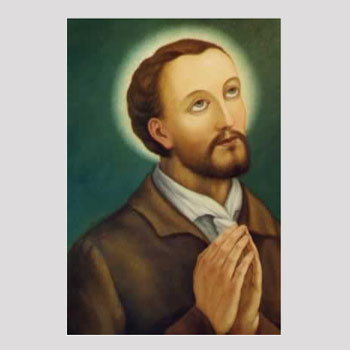 Jean de La Lande (Birth date unknown -1646) worked as a layman with the French Jesuits on the Mohawk mission and gave his life on a mission to secure peace. He was born in the Norman seaport of Dieppe and was probably in New France by 1642. He served on the staff of the Jesuit residence at Three Rivers until he set out from Quebec on Sept. 24, 1646 with Father Isaac Jogues, two or three Hurons and a Huron-Iroquois. De la Lande volunteered to accompany Jogues despite that missionary’s description of the hardships of the life he led and the dangers he faced because of the conflicts between tribes and the suspicion some people felt for the missionaries. The Hurons had asked Jogues to lead them on an embassy to the Mohawks to negotiate a treaty.

A few days into the trip, all but one of the Hurons abandoned the two Frenchmen when news arrived that the Mohawks were on the warpath. De la Lande and Jogues continued with one companion on to Ossernenon, the Mohawk village where Jogues had formerly been held captive. A party of warriors looking for any Frenchmen to punish for the epidemic and drought that had devastated the people, were surprised and delighted to capture the famous French missionary. After a beating, all three prisoners were taken to the village. Jogues was killed with a tomahawk blow as he entered a lodge, but de la Lande was held captive in another lodge. He was safe as long as he stayed inside. The day after Jogues’ death, the French lay volunteer tried to sneak out of the lodge late at night to recover the priest’s body. A Mohawk man guarding the lodge, hit de la Lande on the head with a tomahawk, killing him.