It was a memorable event indeed: a thanksgiving Eucharist at the St. Joseph’s Jesuit Church in Beirut, to celebrate the memory of Fr. Frans van der Lugt. Exactly five years ago, on April 7 2014, Abouna Frans (as he was lovingly called) was brutally gunned down in Homs, Syria.

Fr. Arturo Sosa, the Superior General of the Society of Jesus, presided over the Eucharistic Celebration, which was concelebrated by over fifty priests. The Church was jam-packed with people from all walks of life. Among those present were Bishops representing the Maronite and Armenian Patriarchs, the President of the Near Eastern Council of Churches, representatives of other Churches and religious orders, alumni, collaborators, friends and well-wishers of the Jesuits in Lebanon; some of whom knew Abouna Frans personally.

The Gospel of the fifth Sunday of Lent (John 8:1-11) was the episode of the adulterous woman. In his homily, Fr. Sosa highlighted how Abouna Frans took side with the broken and the weary, the sinners and the lost, and, like a true Pastor, helped them to heal and to come back to God. It is common knowledge that for almost fifty years of ministry in Syria, this holy man reached out in every way he could and positively touched the lives of hundreds of people: young and old, Christians and Muslims. The driving force in his life was love for one another and love of God.

The Eucharist was presided in English with a fair amount of Arabic and French segments – to cater to the diversity of those present. Moreover, there was a high degree of participation among the faithful who belong to this sub-parish. After the Mass, Fr. Sosa met and interacted with the Bishops and some of the specially invited guests. 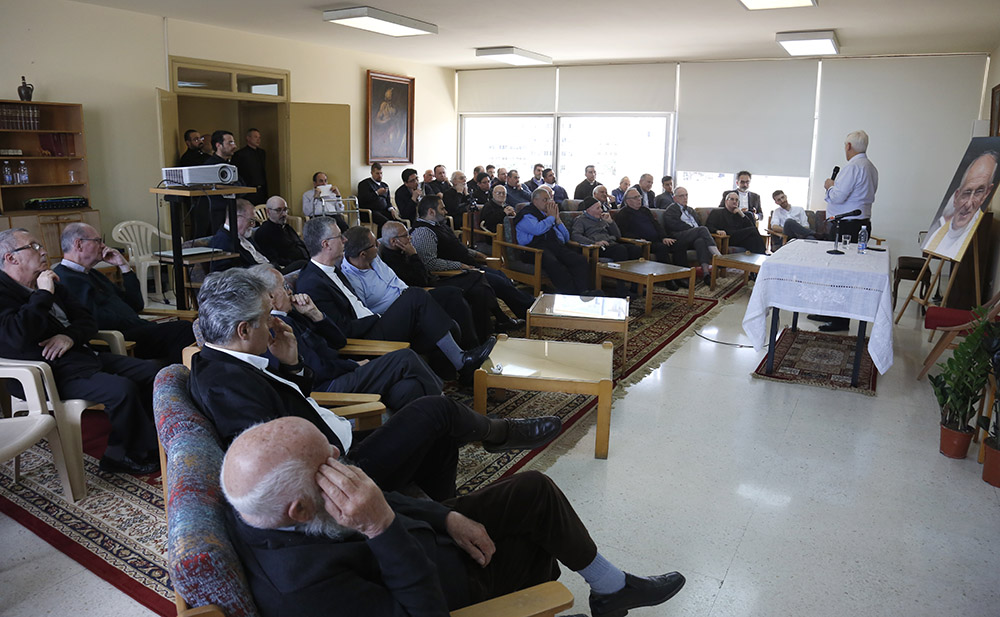 The huge contingent of Jesuits present was then treated to a private in-house sharing with Father Sosa on the four Universal Apostolic Preferences(UAPs) of the Society of Jesus. Through a well-prepared PowerPoint presentation, the Superior General challenged the Jesuits present to not merely assimilate them – but to do much more towards their implementation.

A festive agape and a brief photo session culminated an eventful day for all. Throughout the programme, one could truly feel that the spirit of Abouna Frans lives on!