Are there still Jesuit novices? 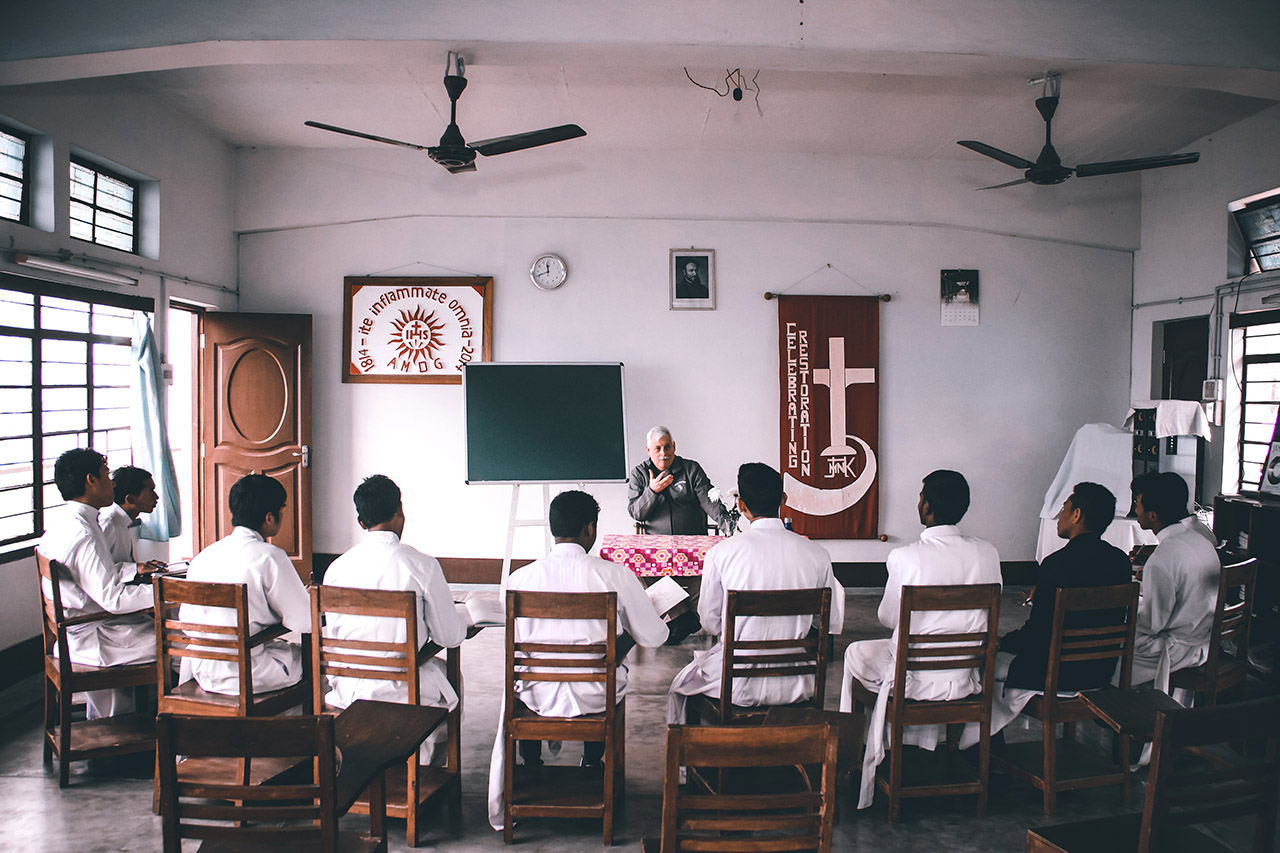 The answer is “yes”. Young men are choosing to enter the Jesuits, all over the world, often after a time of discernment and day-to-day contact with a Jesuit community. The number of novices varies greatly from region to region. One of the most notable “nurseries” now is North-East India, especially the Province of Darjeeling and the Region of Kohima which Father General visited recently.

In Mawshorhrow, Assam, the Pedro Arrupe Novitiate currently has 14 novices. In Kalimpong, Darjeeling Province, there are 10 novices. We had the opportunity to interact with the novices in Kalimpong who are all between the ages of 20 and 24. In this part of the world, the choice with regard to vocation is still usually made at the end of secondary school (grade 12). Candidates can then spend one or two years in a pre-novitiate programme which allows both aspirants and Jesuit formators to verify the foundations of their religious vocation.

Here are some echoes of the lively conversation our journalist had with the novices.

Where does your vocation come from?

Samson has nurtured his vocation since his childhood and this allowed him, at the age of 18, to be receptive to the call to live as a candidate for Jesuit life. He chose the long road by studying sociology before entering religious life; he considers his vocation to be a project in progress. Both Sushant and Earnest state bluntly - separately and without having lived in the same region - that they did not like priests. The priests, as they had found either in their parish or in the apostolic school, were distant and too self-centered. Their impression changed when they met Jesuits who interacted a lot with everyone and were active in a variety of fields. Sanchilit also perceived in them an intellectual depth that attracted him.

Why the Jesuits and not the diocesan clergy or another congregation?

Parmenus had long considered being a social worker. During the candidacy period, he saw how Jesuits could be involved in social apostolate and felt that his desire could be enriched by the spiritual dimension. In a sense, the choice of Ashish for the Society of Jesus is in the same spirit. He did not know that priests could have such a diversity of ministries; the variety of types of services and the closeness to the people appealed to him a lot. Anup was not thinking about the priesthood; he too was attracted to social work. The opportunities he had to get to know such works as Gandhi Ashram and Hayden Hall were a revelation for him.

What challenges does novitiate life present? What difficulties do you face?

It was not easy for Sanchilit to leave his family because his father was under great strain with his brothers over issues of property and other matters. When he was there, he was able to defend him. What would happen if he became a Jesuit? Binod simply admits that silence, prayer life, being able to pause, all this appears to him to be very demanding. The death of his father brought the temptation to leave, but he remembered that his father had told him that when you commit yourself, you commit yourself entirely. Finally, Mohit responds clearly that rules and regulations as well as obedience in religious life are a challenge in today’s world. Nevertheless, it is a challenge which, if taken up, allows us to come closer to God, to get to know him better.

On this question of the challenges faced, none had explicitly mentioned that of celibacy... The journalist did not want to leave it at that: was the project of a life of celibacy an obstacle? There was transparency in the answers. This, the novices confirmed, was a topic quite present in the conversations among themselves and with the formators. During their teens, these young men had sweethearts and they are aware of the challenge that is before them today. They testify that sexuality is beautiful, even holy. But they envisage living it in a context of chastity which opens up a path of great availability to them. The example of Jesus and of many saints allows them to believe that this is possible and that it will strengthen their total service in a given life “for others”.

JCSA India Formation
Share this Post:
Reading the Past to Write the Future
COVID-19: Discerning a path to God
Posted by Communications Office - Editor in Curia Generalizia

Having in mind the dalits and the transgenders

Loyola Institute of Business Administration (LIBA), in the Jesuit Chennai Province (CEN), one of the premier business schools in India, implements the Universal Apostolic Preferences (UAPs)...