This simple slogan was the genesis of a ministry that would forever change East Los Angeles. In the process, that ministry would become a worldwide source of inspiration for those seeking to lift the marginalized from poverty, and break the cycle of violence and incarceration. It was this slogan that Fr. Greg Boyle, a Jesuit priest from California, used as a foundation for an initiative he named “Homeboy Industries.” Started in 1988 at the center of Boyle Heights - then the area with the highest gang activity in the United States - Homeboy Industries (“Jobs for a Future”) sought to minister to former gang members and the recently incarcerated with a mixture of social/mental health counseling, job training and legal services.

Over the course of its 32 years of operation, Homeboy Industries has grown from a volunteer-supported ministry that served one person at a time out of Dolores Mission Church, to a $23 million-a-year institution with its own campus to houses 7 social enterprise businesses. Today, Homeboy Industries employs 300 staff, all of whom have gone through the program through which more than 8,000 trainees pass each year. Together they run Homeboy Bakery, Homegirl Café & Catering, Homeboy/Homegirl Merchandise, Homeboy Farmers Market, Homeboy Silkscreen & Embroidery, Homeboy Grocery, and the Homeboy Café & Bakery at Los Angeles International Airport. 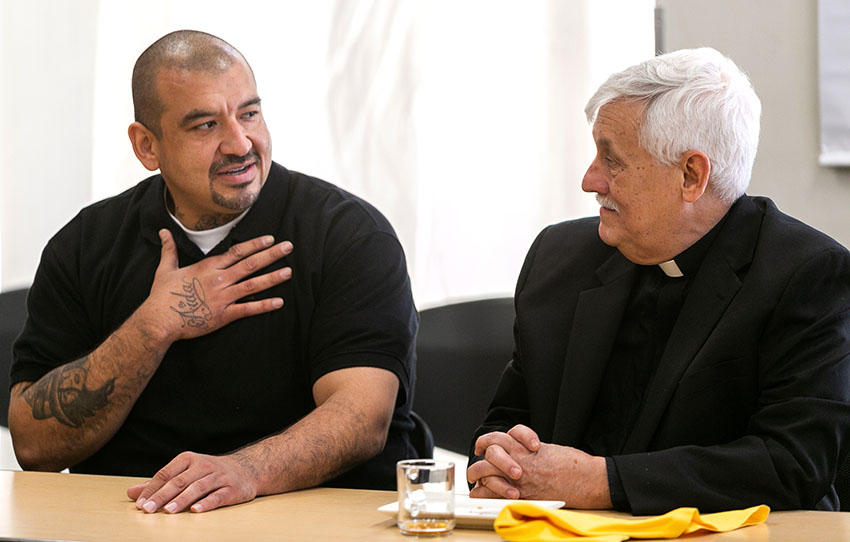 32 years of ministry is an impressive feat of sustained service to a historically underserved community, but that wouldn’t in itself be enough to earn the Conrad N. Hilton Humanitarian Award, the largest annual humanitarian prize given to non-profit organizations. Each year the foundation presents a $2.5 million award, created in 1996 to honor Hilton’s lifetime of philanthropy and dedication to humanitarian efforts, to a non-profit organization that shows “exemplary and extraordinary contributions toward alleviating human suffering.” Homeboy industries may have garnered their attention with their three decades of service, but what impressed the judges the most was how the ministry has changed not only East Los Angeles, but similar works around the world.

By the numbers, Homeboy Industries is impressive. They raise $23 million a year in funding: $14 million from foundations, $7 million from Homeboy Industries businesses, and $1 million from government grants. Of that $23 million, ALL of it is spent within the program on its 8,000+ trainees, 300 staff, 7 social enterprises, tattoo removal, mental health counseling, and comprehensive training programs that include subjects ranging from anger management and substance abuse recovery, to spiritual development and personal finance. But the program isn’t just about being self-sufficient or running an efficient enterprise. The true strength of Homeboy Industries lies beyond the numbers.

Each week 15 people interview for a job at Homeboy Industries. All of them have been in a gang, been incarcerated and, post-release, been tested drug-free. Homeboy takes the hardest cases through “reverse discrimination”: the candidates who are most at risk, most undesirable for a traditional job, go to the top of the list. According to Fr. Greg, or “Father G” as he is known on the street, “if Homeboy won’t help there is no other place in the county that can.” 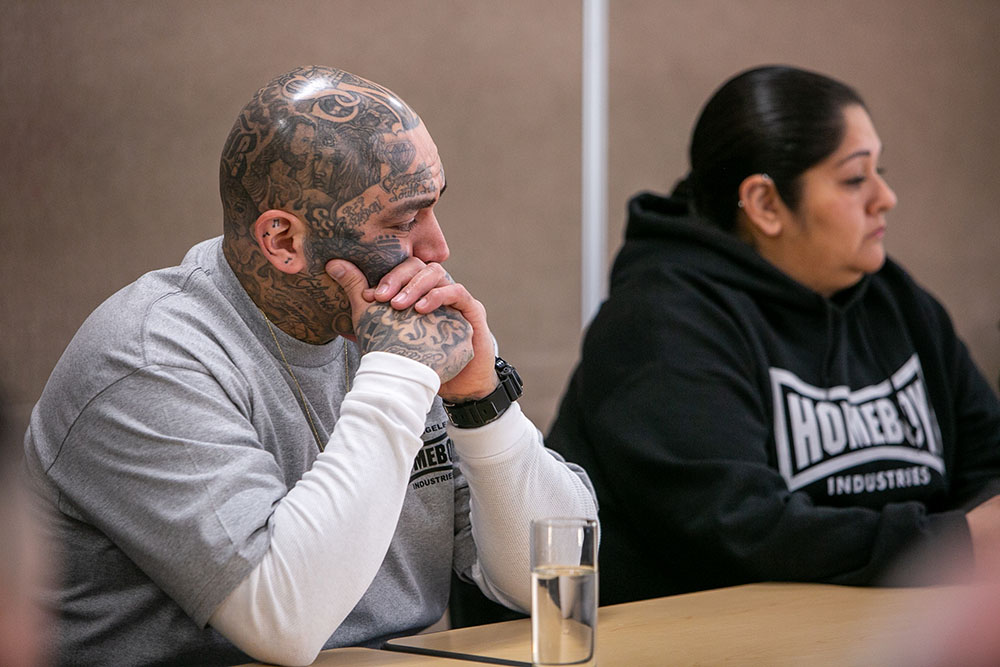 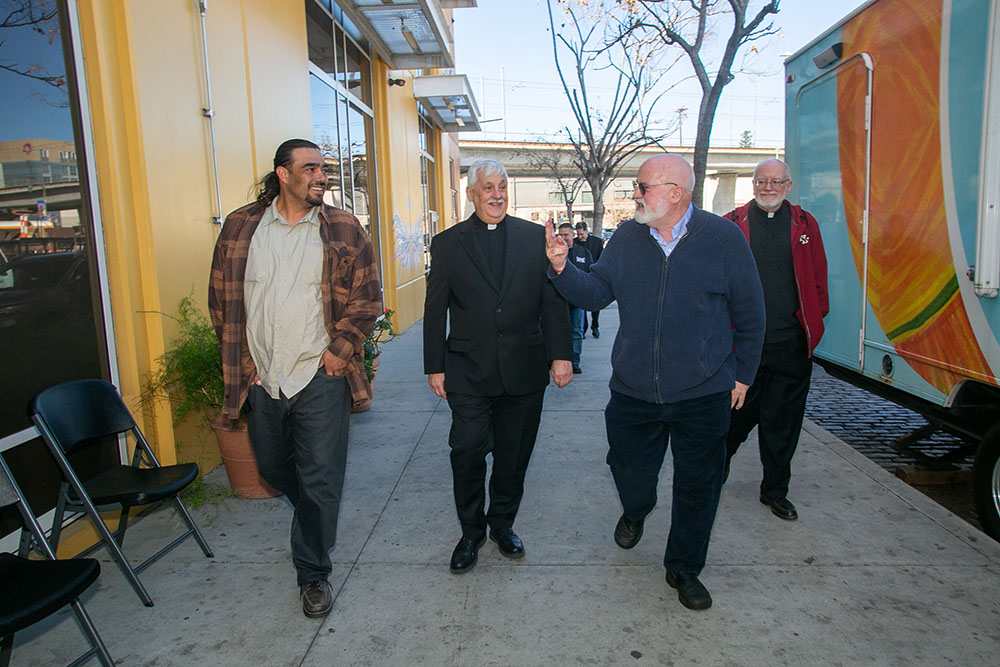 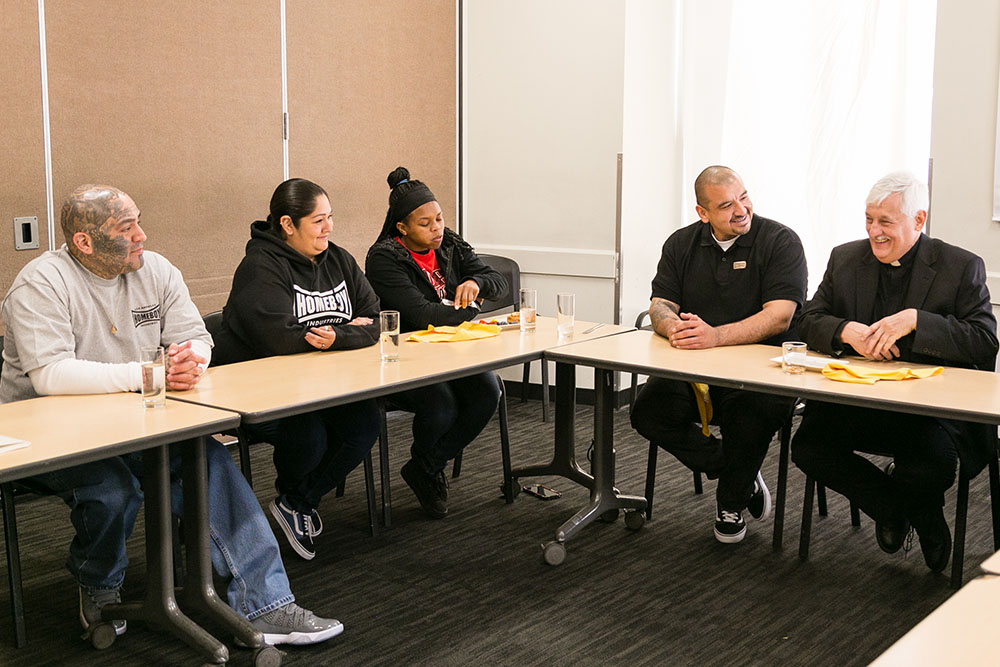 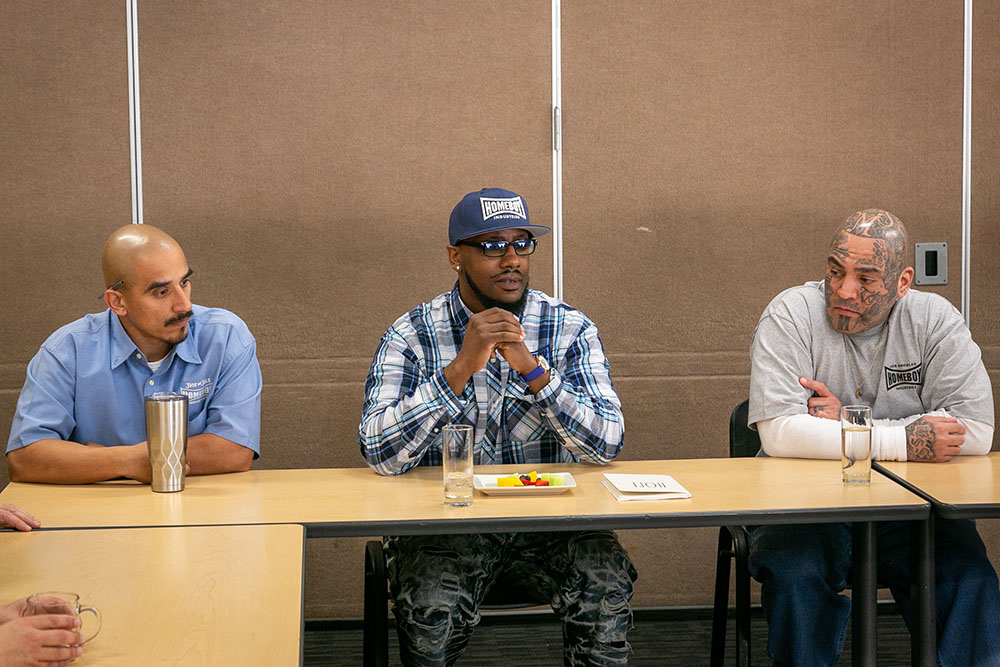 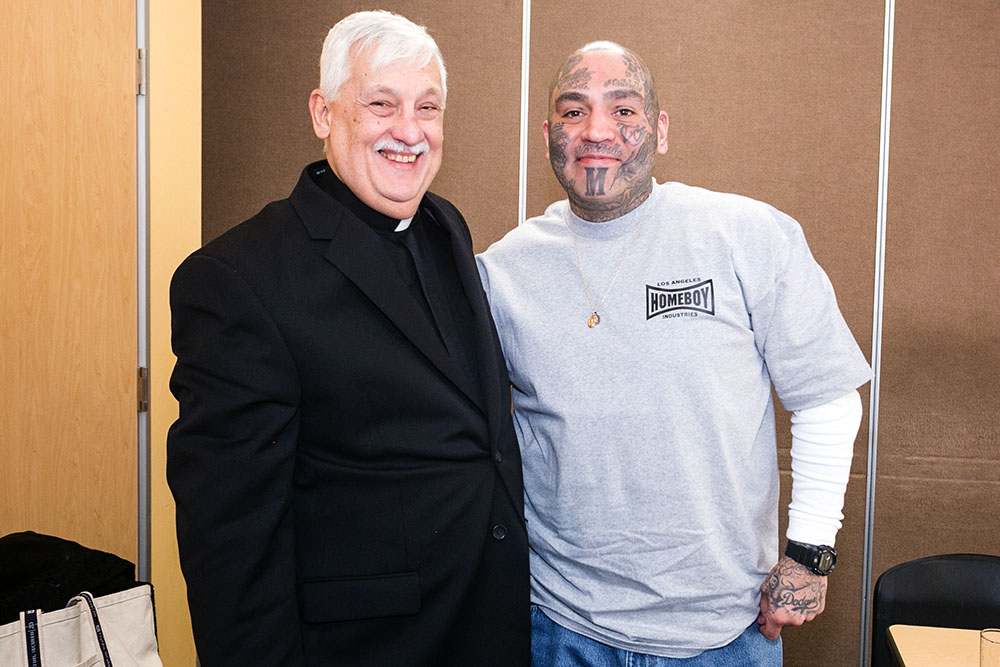 On the training side, Homeboy uses its Social Enterprise businesses as training programs. In most cases, these placements are the first jobs they’ve worked in their lives. Father G sees the training as a crucial step in breaking the cycle of crime and incarceration, “We show them that they CAN take pride in a good day’s work and provide for their loved ones. We show them that they matter, that they are worthwhile.” Hand-in-hand with that training are personal development and education courses, as well as a program that has become a core service of Homeboy Industries: free tattoo removal.

Early in the development of the ministry, Father G recognized that tattoos can seriously inhibit the ability of former gang members to secure regular employment. Unfortunately, tattoo remove is painful and can be quite expensive, sometimes needing as much as a year and 20 treatments: almost always beyond the means of the Homeboys and Homegirls. Seeing the need, Father G added an on-site laser tattoo removal clinic to Homeboy Industries to provide the service for free. As of 2020, the clinic has removed more than 50,000 tattoos from former gang members. 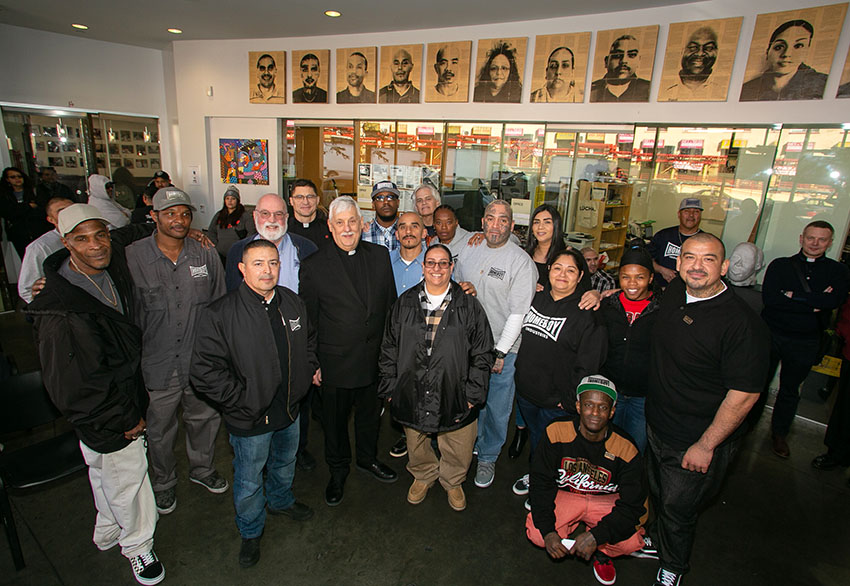 All of these services, along with the street cred that Father G has earned over three decades, has created a program that is respected by the community, and clear in its mission. For many prospective trainees who walk through the door for the first time, usually bitter and cynical, seeing people like themselves - with similar backgrounds and personal histories – who are willing to help them, makes Homeboy Industries more of a family than a business. As one trainee noted, “I didn’t know how broken I was till Homeboy let me heal.”

Over the next few days, we will be publishing personal stories from some of the Homeboys and Homegirls who have turned their lives around with the help of Fr. G and the Homies.

Walking with the Excluded JCCU Universal Apostolic Preferences
Share this Post:
The urgency of the next 11 years to change and to act
The Maritime World
Posted by Communications Office - Editor in Curia Generalizia

Fr. General: “Christ is the centre of the Ignatian Year” 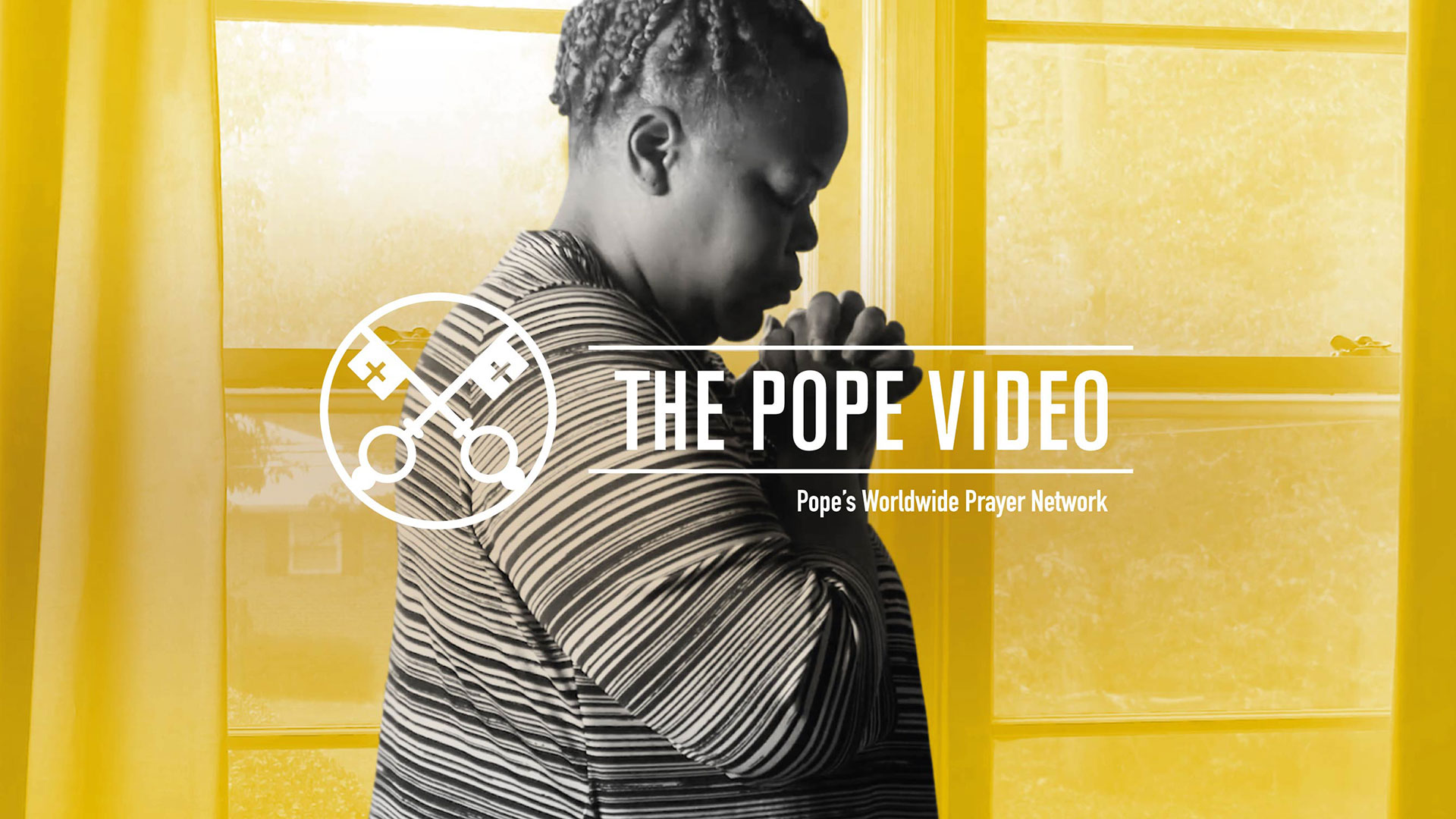 For a life of prayer – The Pope Video

Did the Jesuits really own slaves?

Fr. General: “Christ is the centre of the Ignatian Year”

For a life of prayer – The Pope Video