“Since Venezuelan and Caribbean blood flows through me, I feel very close to the Haitian people.” This is how Fr. Arturo Sosa begins his recent message to the Jesuits of Haiti. It should be pointed out that the territory of Haiti, for historical reasons, is currently part of the Province of Canada, but at the same time it is increasingly linked to other Jesuit entities in the Caribbean region.

Haiti has had its own superior, Jean Denis Saint-Félix, for less than two years. Although he reports to Fr. Erik Oland, the Provincial of Canada, he is largely responsible for the organization of the apostolic work in the country. In this context of “administrative youth,” Father General first greeted his companions, starting with the eight novices who have just entered the novitiate in Port-au-Prince. He acknowledged how Haiti is going through difficult times and thanked the Jesuits for their commitment, their generosity and their desire to re-imagine the presence of the Society of Jesus in response to the hopes of the Haitian people.

He then chose to highlight one aspect of what he likes to call the “life-mission” of the Society in this Caribbean country: the Jesuits form one apostolic body. This does not mean, he clarified, to simply work a lot, but to do so in a united, unified way, as a body. This is only possible, as Pope Francis pointed out when he confirmed the Universal Apostolic Preferences of the Society, if a spirit of prayer and union with God provides the basis for all commitments. 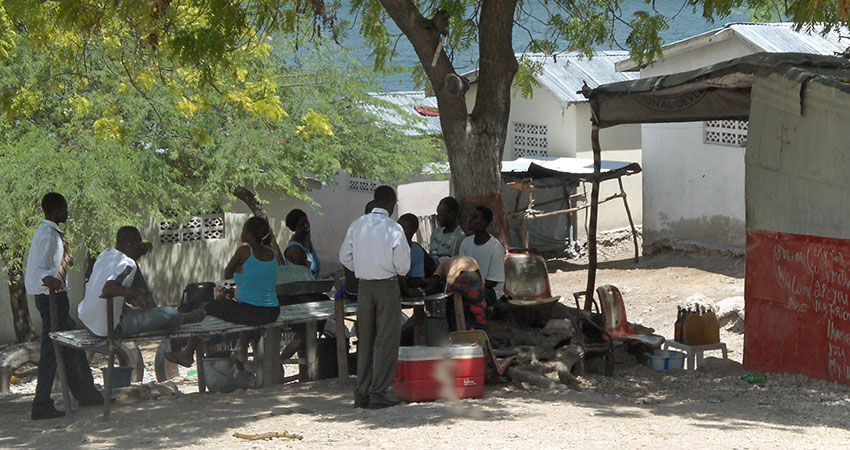 Referring to the experience of the First Companions who, together with Ignatius, had recognised that they had been gathered by the Lord despite the diversity of their origins and cultures, Father Sosa stressed the importance for the Haitian Jesuits of living what the Jesuit tradition calls Ignatian indifference. It is a way of countering the temptation of individualism and that of seeking to advance one’s own project rather than that of the whole apostolic body. This also implies that, even though the needs are very great in a country like Haiti that is experiencing so many challenges, Haitian Jesuits are called to show their generosity for missions and projects outside their own country. In particular, they must do so by accompanying the other units of the Society of Jesus in the Caribbean region, overcoming divisions that have their roots in the times of the conquest of these territories by European powers.

A constitutive dimension of the Society’s mission, particularly important in the context of a country where the majority of people live in poverty and where social and political leadership is lacking, is to help the Haitian people discern where and how the Spirit of God is working within them. It is a call for Jesuits to pursue a ministry of reconciliation and to choose apostolic activities that sustain hope.

To sum up, Father General offered a message of encouragement to his companions of Haiti, one of the most challenging countries in the world. He also challenged them to use a broad vision, avoiding turning in on themselves, in order to participate in the universal mission of the Society to show, all together, as an apostolic body, the way to God.

Watch the video message (in Spanish):