Alonso was born around 1531 in Segovia. He married in 1558 and had several children. Life looked good for him, but nine years later his children, his wife, and his mother had died, and the family’s wool and cloth business had failed.

Alonso rebuilt his life with the help of the Jesuit rector of Segovia. He tried to enter the Society but was not admitted because of his weak health, his age (he was over 37), and his limited schooling. He did not give up. He followed his spiritual companion to Valencia, where he resumed his studies. He again asked for admission, either as a priest or as a brother. He finally entered on 1 January 1571. In August of that year, he left for Palma de Mallorca, where he served as sacristan and porter until his death on 31 October 1617.

The office of porter was a position of great trust and responsibility since it was the public face of the community. He dealt with many different people, including the Viceroy, and he gave spiritual guidance to many others, including St. Peter Claver.

Alonso maintained an intense spiritual life of prayer and asceticism. He had mystical experiences which, at the order of his rector, he described in a memoir called Memory of Some of the Things That Have Happened to a Certain Person. His obituary stressed his poverty, his penance, and his sense of obedience, as well as his prayer life and his special devotions to Jesus, Mary, and the angels. He nicknamed different people according to the virtues in which they excelled (“helpful,” “humble,” “industrious,” etc.), and he sought to discover Christ in all those who knocked at the door of the college. He was canonised by Leo XIII on 15 January 1888, together with his disciple Peter Claver and the young Belgian Jesuit John Berchmans.

Alonso was a religious who was not a priest. This is currently the case with more than 80% of the persons in consecrated life, including women's congregations. In the Society of Jesus, however, this number of religious who are not priests does not reach 7%, although in countries such as Spain it exceeds 16%. 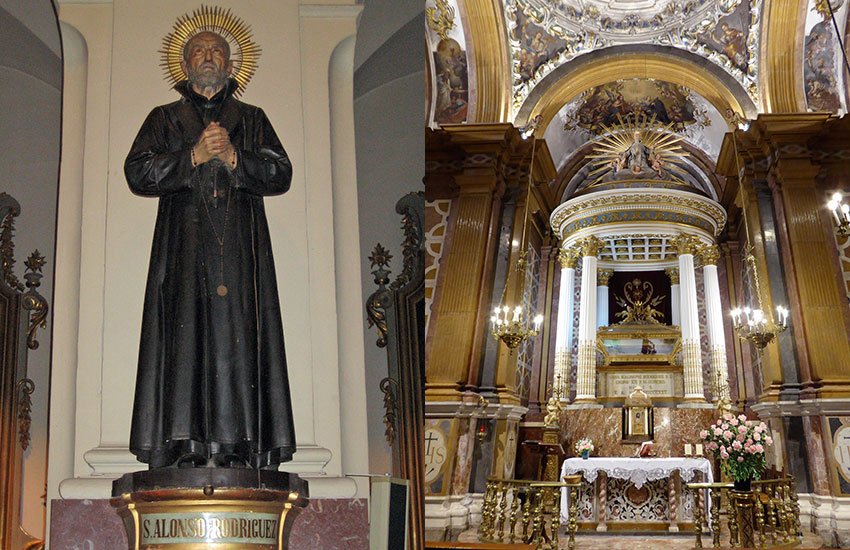 The Society was brought to birth by a group of priests who had graduated from the University of Paris and who placed themselves at the disposal of the Pope to be sent on missions. But already in 1536, four years before the Society’s founding, the first layman joined, the widower Esteban de Eguía of Venice. He was followed by other “helpers,” and in 1546 the grades of spiritual and temporal coadjutors were added to accommodate those who helped the professed members carry out the mission of the Society in either spiritual or material tasks,.

The vocation of the temporal coadjutors had a utilitarian character; they were given the “lowly and humble” tasks, like Martha in the Gospel. For this reason, one of the early rules, which was not repealed until 1995, established that “they should not learn more letters than they knew when they entered.”

St. Alphonsus (as his name became in Latin) heroically embodied this figure of the temporal coadjutor. Over the centuries many brothers have given their lives as anonymous servants in the houses, kitchens, laundries, and farms of the Society’s works. Still others have been highly skilled architects, painters, botanists, teachers, and administrators. Suffice it to mention the painters Andrea Pozzo and Giuseppe Castiglione, or the botanist Georg Joseph Kamel (who gave his name to the flower called the “camelia”).

After Vatican II, the Society experienced a change of mentality. This was developed further at the 34th General Congregation (1995), which declared: “We all have the same mission, which is shared by priests and brothers.” Today, Jesuit brothers are professional lay religious who participate fully in the mission of the Society, carrying out a wide range of tasks according to their ability and preparation. They are vocation promoters, JRS regional directors, assistant novice masters, admonitors of the Provincial, provincial consultors, professors of theology and other subjects, catechists, deacons, maintenance supervisors, mail clerks, managers, administrators, technicians, and much else besides.

The Hands of a Brother

Watch this video produced by JCAP (Jesuit Conference of Asia-Pacific) for the feast of the patron saint of the Jesuit brothers, Br. Alphonsus Rodriguez.

Watch this video produced by "Voces Esejota" for the feast of the patron saint of the Jesuit brothers, Br. Alphonsus Rodriguez (in Spanish).

Vocations Curia
Share this Post:
Winds of peace from Korea
Always in our hearts
Posted by Communications Office - Editor in Curia Generalizia