One rupee for a new India

Many Jesuits in India are seen - and see themselves - as human rights activists. Among them is Fr. Cedric Prakash (Gujarat Province) who reports the conclusion of a trial that has attracted a lot of attention. It was the trial of a public interest lawyer, Prashant Bhushan. This is his story.

Just a couple of days before his retirement from the Supreme Court of India, Justice Arun Mishra gave the people of India a special gift: a ONE RUPEE COIN! (equivalent to 0,01€) It was in the form of the ‘punishment’ meted out to senior public interest lawyer and activist Prashant Bhushan for a contempt of court case against him. Bhushan was already found ‘guilty’; only the quantum of ‘punishment’ was to be specified. This was done on 31 August. The 82-pages judgement concludes “We, therefore, sentence the contemnor with a fine of Re. 1/-(one Rupee) ... failing which he shall undergo a simple imprisonment for a period of three months and further be debarred from practicing in this Court for a period of three years.”

It was perhaps one of the most high-profile cases in the Supreme Court in recent times. Bhushan is a well-known lawyer who has taken up cudgels on behalf of the poor and exploited, being always against the powerful, the vested interests and the ruling regime -particularly the current political dispensation.

The immediate provocation was two tweets Bhushan made in June; first against four former Chief Justices and in a second tweet against the current Chief Justice. As the case unfolded, it was clear that Bhushan would never relent; besides, Justice Mishra was known in giving favourable judgements to the BJP (the ruling political party), the RSS (Hindu nationalist movement) and other powerful groups. 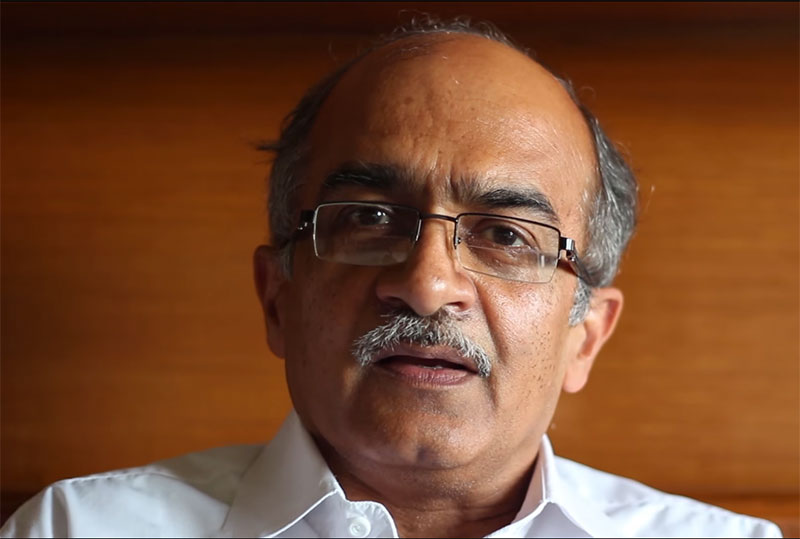 Caught badly on the wrong foot, Justice Mishra and his colleagues refrained from giving the order for the sentencing of Bhushan on the day of judgement. As a face-saving and last-ditch effort, they felt that Bhushan needed to unconditionally apologize in order to settle the matter, asserting that they were giving him 2-3 days more to think over things. But Bhushan was unrelenting saying that he would never apologize.

Several intellectuals, civil society leaders, leading editorials have expressed their disgust with what is happening in the Indian Supreme Court today. Some of the judgments have been extremely prejudiced, one-sided and hardly befitting of the most important pillar of democracy. Besides, important cases (and judgements) are kept in cold storage. Several of the judges have succumbed to the political powers and have not displayed the courage, the wisdom and the prudence to protect the Constitutional rights of the citizen.

After he was given the punishment, Bhushan said,“Every Indian wants a strong and independent judiciary. Obviously if the courts are weakened, it weakens the republic and harms every citizen. I am extremely grateful and humbled by the solidarity and support expressed by countless persons, ex-judges, lawyers, activists and fellow citizens who encouraged me to remain firm and true to my beliefs and conscience. They strengthen my hope that this trial may draw the country’s attention to the cause of freedom of speech and judicial accountability and reform. What is very heartening is that this case has become a watershed moment for freedom of speech and seems to have encouraged many people to stand up and speak out against the injustices in our society. I am more confident now than ever before that truth shall prevail Long live democracy! Satyameva Jayate!”

A powerful statement! It should be indeed, because the Re 1/- is the symbol of change, of a NEW INDIA!

JCSA India
Share this Post:
In the political arena, a space for Catholics – The legacy of Father Sorge
On 14 November, we remember Fr. Pedro Arrupe
Posted by Communications Office - Editor in Curia Generalizia