Among recent visitors to the General Curia, we had the opportunity to meet with Bishop Antoine Audo, a Jesuit and bishop of the Chaldean community in Syria. He is based in Aleppo, one of the cities that has suffered most from the war that has ravaged the country for over ten years. We invited him to share his experience.

Bishop Audo, what first comes to mind when people ask you about Syria?

First of all, the war during these last ten years has resulted in poverty and even misery. That’s what first comes to mind. But in spite of everything, I have witnessed many testimonies of dignity, and a strong sense of solidarity characterizes the Syrian people. Knowing these people gives us life.

Tell us more about your experience with the Christians of Aleppo.

Before the war, there was a sense of security and economic and social stability. Syria was ranked among the most affluent countries in the region; it was the most stable despite having a one-party policy and a long military history. The war brought fatigue, discouragement, and uncertainty about our country’s future, especially because of emigration. Some 80% of the Christians in Aleppo have left. Those who remain are mostly the old and the poor. We priests and bishops try not to show our fears about the future; we try to stand firm and give meaning to the presence of our communities.

Are the Christians persecuted? Does religious affiliation play a role in this war?

I wouldn’t call it persecution, to be honest. This is not a war of religions, as some media have tried to describe it. Christians have been very respected socially in Syria for their work, their skills and for their ethics as well. I have often heard Muslims say: “Christians are not liars!” When there is persecution, it is by individuals; they are “Muslim Brotherhood”-type extremists who believe they are doing good by persecuting “infidels”. But this is not widespread. There is a respect for Christians and even a certain attraction to the Gospel.

What destabilizes us is the break-up of families due to emigration. Children are scattered in different countries. The strength of families is very important in a society with strong tribal structures. When I use the word “tribal”, I am referring to the fact that a person’s identity is always linked to a group, to his family. It’s not like in the West where the individual can exist on his own. In our culture, we exist by reference to our family. So, to alleviate our suffering and our doubts, we have to rebuild the social fabric. 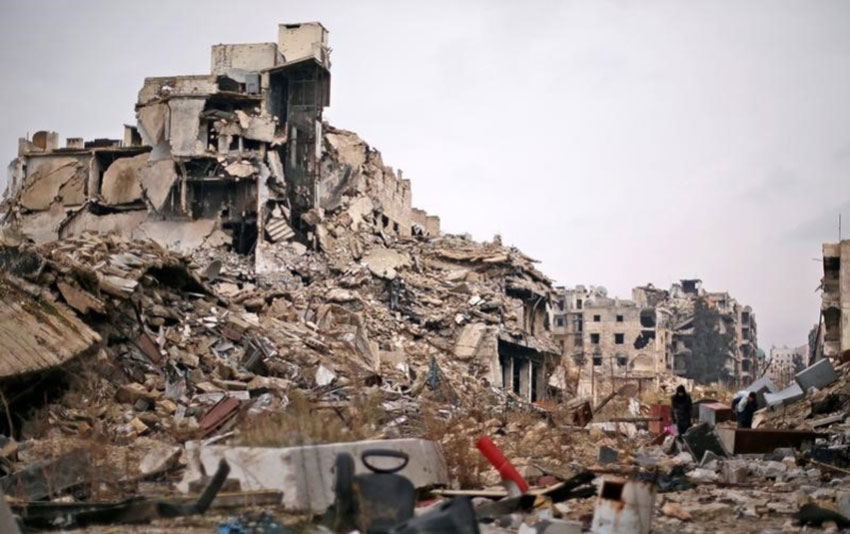 Effects of war in Aleppo

More personally, how do you see your role as a bishop? How do you nourish your hope and that of the Christians around you?

As a bishop and a Jesuit, I am convinced that the Christians of Syria have had and will have a significant presence in the country. We have been part of Syria’s Christian history since the time of the apostles. Paul experienced his conversion in Damascus; he was from Tarsus, a few kilometres from where we live! We represent a wealth of liturgical, theological and ethnic traditions, and we have the Byzantine, Syriac, Chaldean, Armenian and Latin rites. This Christian presence in the midst of Muslims is important because it bears witness to a faith capable of integrating modernity. Christians appreciate rationality, and respect human rights, while at the same time witnessing to our faith and not fearing the world. Muslims find it difficult to bridge these two dimensions.

In conclusion, can you tell us about your prayer?

I am very sensitive to gestures of human generosity. I like to travel by simple means; I take the bus. People tell me: “You’re a bishop, take a taxi!”. No, I am greatly enriched when I see people, often poor people, Christians and Muslims, respecting and helping one another, showing solidarity. All this helps my prayer. This fills me with consolation and nourishes my examination of conscience.This is where my usual prayer lies.

On a deeper level, I have lived in faith as a member of the Society of Jesus, and since the novitiate I have tried not to build my life on illusions and vanities. This way of following Christ is a source of continual freedom for me, but it is a goal never achieved. It is always my desire - that’s where my ‘magis’ lies.