A home (be)coming at Loyola House

A retreat center that turned into a shelter for those experiencing homelessness during the pandemic.

“Everything will be alright in the end, and if it is not alright, it is not the end.”

This declaration of deepest faith is not Julian of Norwich’s, but belongs to a more obscure mystic: Sonny Kapoor, the zealous owner of The Best Exotic Marigold Hotel, in the 2012 film of the same title. It is a comedy covertly Christian in that it tells multiple tales of reconciliation, conversion and resurrection all within a hodgepodge community of fragile people newly lodged at a struggling hotel. The movie has helped me view with grace and humor the ongoing drama of LHSTAP: The Loyola House Supportive Temporary Accommodation Pilot.

Loyola House (LH) of Guelph, Canada, began in 1964 as a weekend retreat center for men. Over the next half century, it would expand its horizons and hospitality to women, makers of the full Spiritual Exercises, trainees in spiritual direction, budding ecologists, Buddhists, musicians and many other groups compatible with its evolving mission (currently: “to cultivate spiritual growth and ecological engagement”). When this 55 year run was stopped short on Friday, 13 March 2020 by Covid, LH sat empty several months, more silent than a serious group of exercitants in the depths of the Third Week. 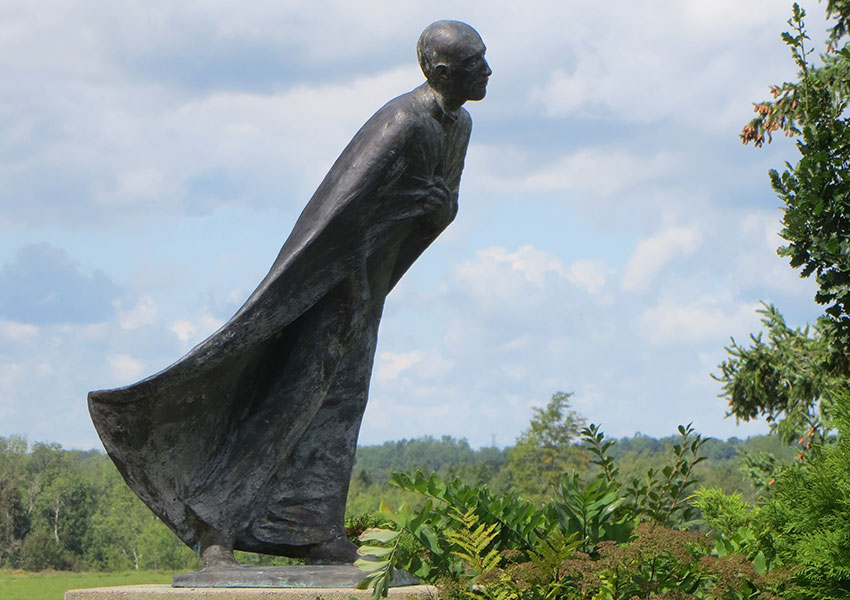 Silent no more. In August the municipality asked us to open the house to locals without homes. They would pay us rent, but much less than what the hotels were charging them to shelter those experiencing homelessness. The offer was mutually attractive, given the pandemic-punch to the finances of both bodies. Concentric circles of discernment started turning that included the Jesuit community, the LH staff and board, and even nearby householders, many of whom were not enamored with the idea of becoming neighbors to the marginalized. Besides the rent, we felt grateful for the unbidden invitation to walk with the excluded. The second UAP had come knocking providentially at our door.

And so, we opened up the best, exotic, marigold temporary housing project. Like Sonny in the movie, we began bustling around in a flurry of best intentions to welcome forty people experiencing homelessness, some of whom were dubious of living in a Christian institution. Knowing that love manifests more in deeds than words and that stomachs live close to hearts, the renown LH kitchen (one retreatant famously claimed that “even if I lost my faith, I would keep returning for the food”) swung again into action. The new residents were met with meals that our former retreatants would covet.

Only inches into 2021, a Covid outbreak at LH was declared. This meant isolation for all the residents and a minor crash in our care for our common home (4th UAP). Having prided ourselves for years for our waste minimalism, suddenly we had to serve three meals a day in disposable, single-use containers. As I write this, the residents have just passed the 40-day/40-night point of a quarantine which has closed all communal spaces within the house. It has also reduced interchange between the residents and LH personnel practically to zero. Staffed by employees of a local homelessness agency, the project is located in LH but, at the moment, sadly distant from direct Ignatian influence. 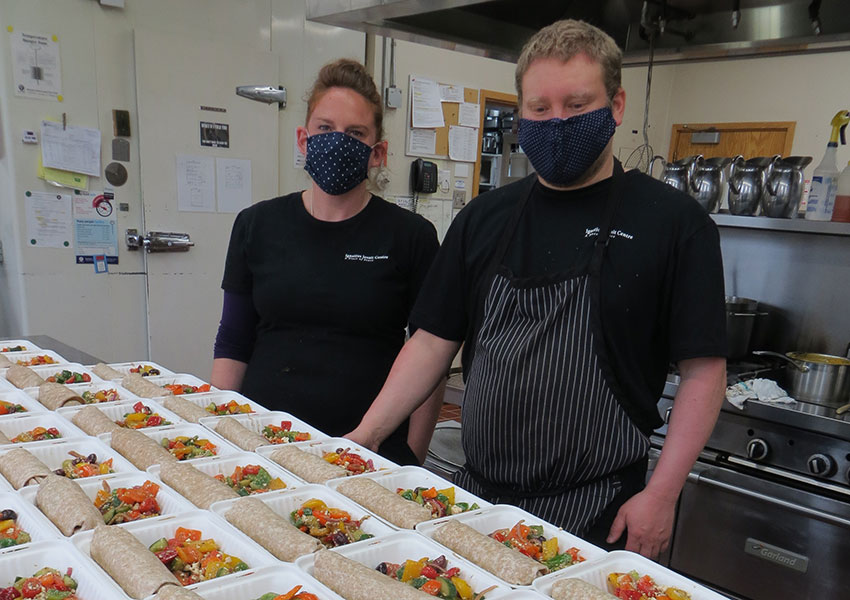 Walking with the poor, it turns out, is difficult for many reasons. Feeding and sheltering the vulnerable is fairly straight forward. As owners of LH we are currently succeeding here. But really to walk with our new residents, to share their daily sorrows and joys has become next to impossible under current, lockdown conditions. This is painful for us, as it is in that exchange that the good news gets shared and amplified. Our limitations here stem from the fact that, at the end of the day, we are merely the venue, hosting a mostly autonomous venture run by others. This is a humbling experience for a Jesuit work accustomed to its own efficacious autonomy and sense of accomplishment.

Despite limitations, we feel blessed by the presence of the residents. Testimonies of gratitude and healing (plus reports of minor crises) trickle in. Indeed, even restrictive quarantine in a place so steeped in accumulated prayer seems to be benefitting some of the residents. Still only a quarter of the way into the project, we have learned a great deal, especially about communication and collaboration with partners unfamiliar with our practices of communal discernment. Hopefully, spring will permit the residents to find solace in lending a hand on our ample, organic farm. If the project has not yet realized all our enthusiastic dreams, we continue to hold on to a good piece of mysticism. Our faith remains with Sonny Kapoor’s, certain that, with God, everything ends alright, and if it isn’t quite so at the moment, that just means we haven’t yet reached the end.

Walking with the Excluded JCCU
Share this Post:
Benedict XVI’s legacy for the Jesuits
Can we join the Magi in prayer?
Posted by Communications Office - Editor in Curia Generalizia

Congratulations to the winners of the “Four Dreams” film competition organized by the IAJU and the General Curia of the Society of Jesus! This time, the prize is related to the 2nd Universal Apostolic Preference, the choice to walk with the excluded.