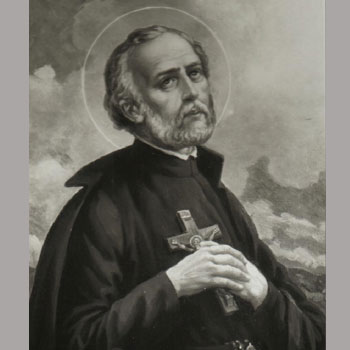 Andrew Bobola (Andrzej Bobola, 1597-1657) gave his life during the conflict between Catholics and Orthodox that formed part of the war between Polish and Russian forces in the mid-seventeenth century. Cossacks opposed to the Jesuit's forceful defense of Catholics butchered Bobola but could not break his faithful commitment to the Church.

He was born in southern Poland to a family that was part of the lesser nobility. He studied at a Jesuit school and then entered the novitiate in 1611. After studying philosophy and theology at Vilnius, he was assigned to be the pastor of the Jesuit church in Nesvizh where he made many converts. After two years there, he returned to Vilnius for 16 years during which he became known for his preaching and for developing sodalities whose members performed ministry to prisoners and taught catechism to children. He and the sodalists also acted heroically during two periods when the plague struck Vilnius.

In 1630 he moved to Bobruisk in eastern Poland where the majority of people were Orthodox and many Catholics had given up their faith, partly because they did not have their own priests and churches. Bobola took on a variety of works in various towns, until poor health restricted what he could do and he returned again to Vilnius.

The agreement of the Union of Brest-Litovsk (1596) had attempted to resolve the conflict between the Orthodox and Catholic churches so they could coexist. Unfortunately some Orthodox joined forces with the Cossack leader Bogdan Chmielnicki who aimed to drive out the Catholics; by 1655 he was successful in controlling large areas of what is now Belarus. At the same time Russia and Poland were at war. On Aug. 8, 1655, the tsar's army marched into Vilnius and sacked the city. Bobola went to Pinsk to encourage Catholics to remain firm, and his success only increased the sectarian conflict. People harassed the Jesuit as he walked around the streets. Two years later the Cossacks occupied Pinsk and forced the Poles and Catholics to flee into the forests. Then they attacked Janów where they massacred Catholics and Jews. Bobola was in a nearby town, but some people told the Cossacks where to find him.

First they tried to permit Bobola to renounce his religion. When he refused, they stripped him and tied him to a hedge and whipped him cruelly. Mocking his faith, they placed a crown of twigs on his head and then dragged him to his place of execution, a butcher's shop. He still refused to apostatize, so they placed him on the butcher's table and tortured him cruelly, tearing the skin off his chest and back and cutting holes in the palms of his hands. They continued to torture him for two hours before finally driving an awl into his heart. Then they strung him up by his feet and killed him with a saber blow.

Just as he died, a band of Poles arrived at Janów in a vain attempt to rescue him. They took his body back to Pinsk where they placed it in the crypt beneath the Jesuit church. His body was later removed to a museum in Moscow and only returned to Poland in 1923.