The Jesuit Pedro Páez at the Spanish Embassy in Rome 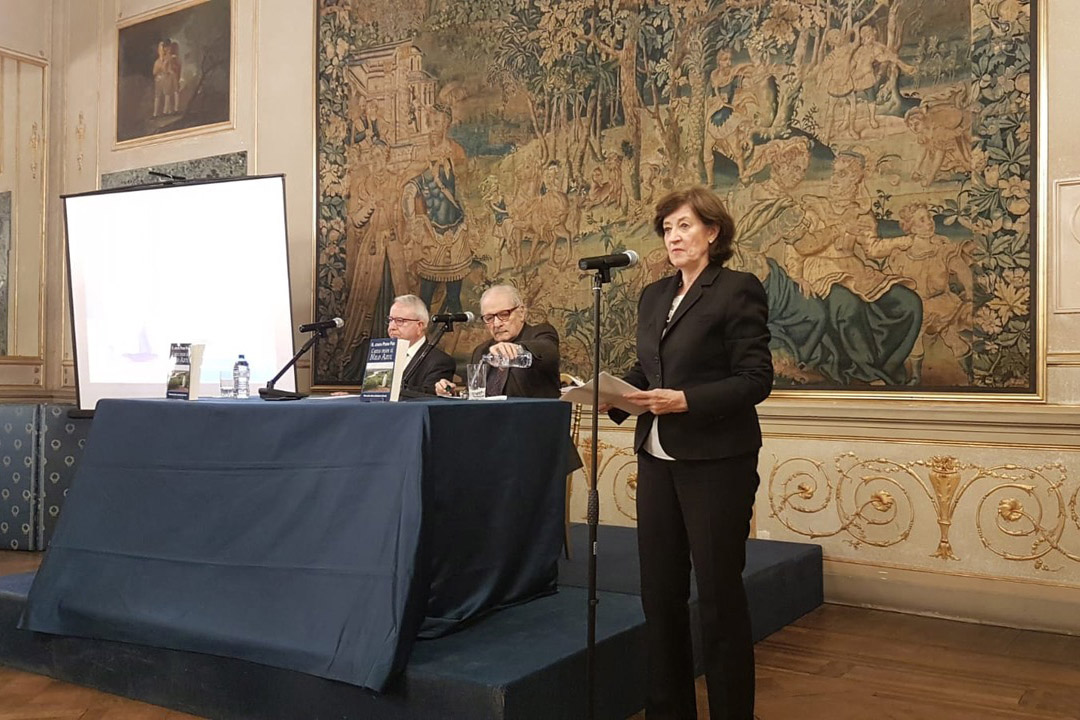 On 30 January, at the Spanish Embassy to the Holy See, was held the presentation of the book “El jesuita Pedro Páez. Cartas desde el Nilo Azul” [The Jesuit Pedro Paéz. Letters from the Blue Nile.] (Xerión Editorial, Aranjuez, 2020), coordinated by Brother Wenceslao Soto, member of the ARSI team (Archivum Romanum Societatis Iesu) at the General Curia.

For this occasion, one of the co-authors, Javier Reverte, came from Spain, and, with the coordinator, was invited to the embassy. In addition to the ambassador (Mrs. M.ª del Carmen de la Peña Corcuera) and her husband (Mr. Amador Martínez Moreillo), several guests from the Spanish cultural world and a fair number of Jesuits were present.

The presentation took place in a baroque hall of the Palace of Spain, where among so many mirrors, tapestries and paintings, the screen and the projector were a bit out of tune. The ambassador explained that she had been interested in Pedro Páez since she was ambassador to Ethiopia from 2004 to 2008 (a post her husband had also held years earlier) and had heard about this Jesuit. After introducing the two speakers, she gave them the floor.

Javier Reverte gave a personal account of how his life as a travel writer led him to Pedro Páez, after he heard about this Jesuit, of whom he was told, in principle, that he was Portuguese. He highlighted his role as an architect and explained how he was the first European to describe the sources of the Blue Nile.

Wenceslao Soto presented the general content of the book and its authors, as well as referring to the appropriateness of the book after the celebration of the IV Centenary of the discovery of the sources of the Blue Nile in 2018. He reviewed the different phases of the journey of the Jesuit missionary Pedro Páez, highlighting his life in Spain, where he was born in 1584, before leaving for Goa. He explained the details of the letter by which he asked to go to the Indies and his work in the lands of Prester John, a time we can consider his golden age.

The work directed by Brother Soto allows us to discover important aspects of the figure of the Spanish Jesuit who opened the doors of Ethiopia at a time when these lands were completely closed to foreigners. Fr. Páez is considered by many experts on Ethiopia as the most effective Catholic missionary in the country. Using science and diplomacy, relying on his personality as an explorer and his knowledge of architecture, he allowed Catholicism to make a first missionary breakthrough. His courage is remarkable. His first attempt to enter Ethiopia had failed because he was captured and had to spend six years in captivity in Yemen. This did not extinguish his missionary desire for “the land of Prester John”, as Ethiopia was usually called at that time. He died in Ethiopia in 1622. Unfortunately, Pedro Páez’s efforts did not achieve the long-term success that might have been expected because other Jesuits sent to the region used a rigid approach that led to the expulsion of the Jesuits from the territory in 1633.