Learning from the Hill Tribes of Nepal 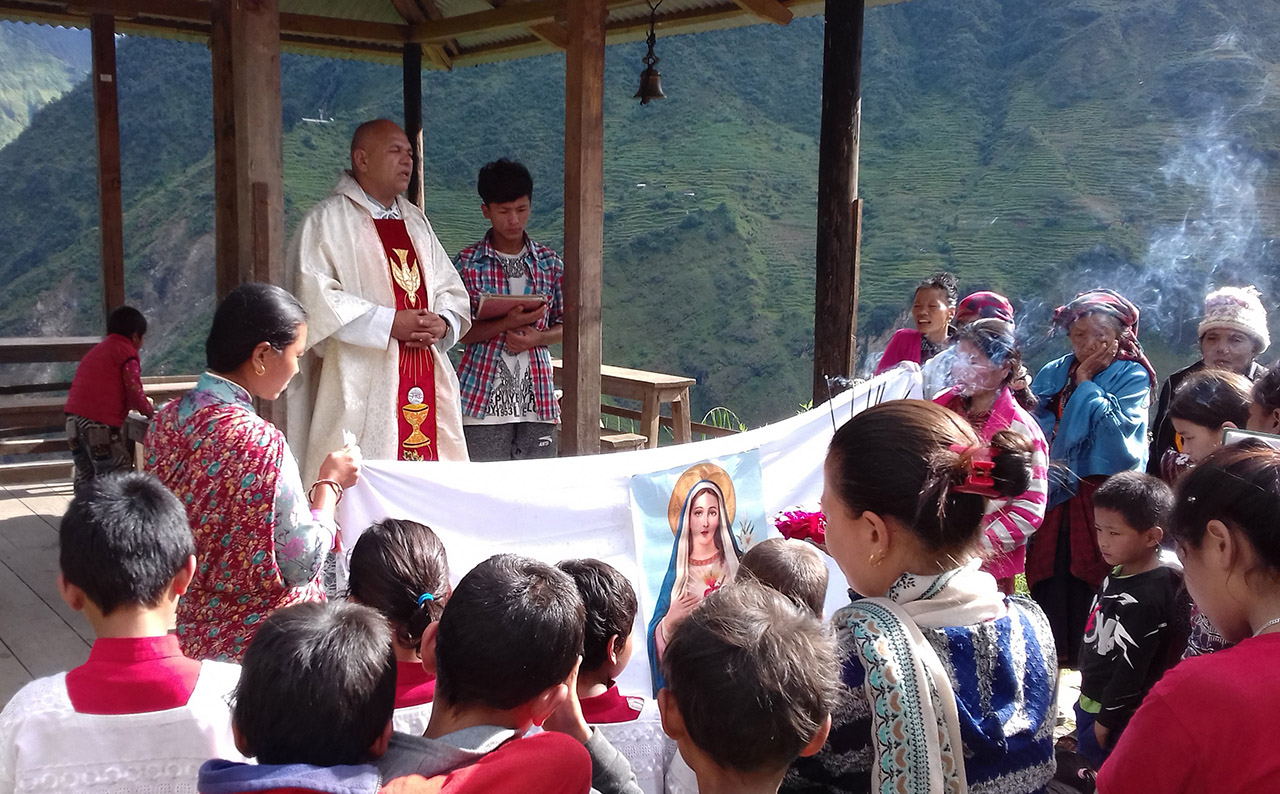 In a secluded area of Nepal, outside of the Kathmandu valley and past a winding road that snakes into the mountains, lies the village of Tipling . This remote community is where the Jesuits of Nepal established their first mission outside of Kathmandu. The winding road that leads to Tipling is relatively new, built by the Nepal Jesuit Social Institute after the 2015 earthquake as a way to get much-needed supplies to the mountain people, and underscores how isolated Tipling has been: not only from the world, but from the rest of Nepal. Fr. General recently visited the area to see the good works of the Jesuits of Nebal and we able to capture a glimpse of ministry in the mission: a story by Fr. Samuel Simmick and a video interview with Fr. Michael Parent.

“When the twin earthquake shook Nepal, I was in the thick of them both. On 25 April 2015, when the quake hit it was just before 12 noon and I was having a hot cup of tea in a place called Tarkerabari. I was with a few faithful from the Tipling Mission, where I was working at that time. And when, on 12 May, the second quake hit I was in Tipling in the center of relief and rehabilitation work, making our plans for future course of action.

After the first devastating quake, of 7.8 magnitude, It took me almost two weeks to reach the Mission because the roads and the treks we used had been destroyed in landslides. We could only either reach the mission by helicopter or risk our life walking through the falling stones. I took the first option and arranged a helicopter with the relief materials and reached the village mission. The state of the village was devastating; our rented house had collapsed. Fr. Norbert D’Souza, my companion at the mission, was living in a tattered tent and giving spiritual, psychological and physical support to the affected villagers. 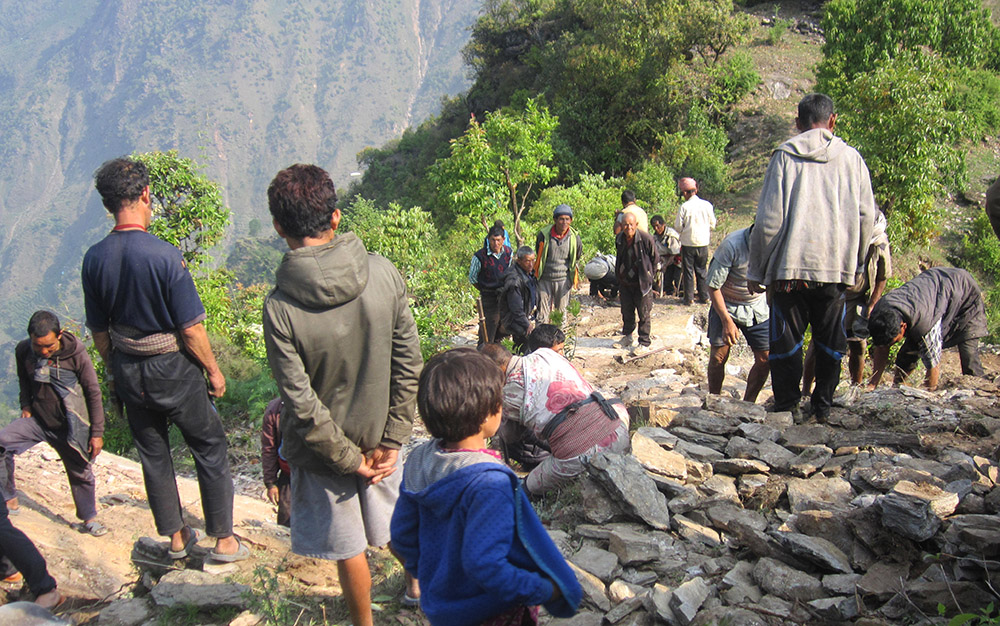 The tireless work of relief and rehabilitation started with initial confusion and later picked up vigor. All this made Nepal Jesuits to make a long-term commitment to help these people by establishing Nepal Jesuit Social Institute (NJSI) with the slogan of “Reaching the Unreached”. The aim of the institute was to go where no one was able to go and help.

In the initial phase, since Nepal Government made a ‘one door policy’ for supporting the survivors, it was difficult to work with National Reconstruction Authority (NRA) of Nepal, seeking permission to reach to the people and support them. We thought it would be better to intervened in public education, since so much damage has been done to the public school buildings. We quickly moved to various areas where no one had reached; with support in the process, we established our presence and started our support in 11 earthquake-affected districts. First, we had to support the students and teachers with stationeries, school uniforms and teaching materials. Soon we started supporting the schools with Temporary Learning Centres (TLCs), so that the children could have a proper shelter during rain or hot sun or in cold winter. The task was not easy, but a small group of dedicated staff made it possible to reach out to those places where no one would dare to visit. The conditions of roads were so bad that very often, vehicles with construction materials would not reach to the destination, we needed porters or mules to transport the goods, which delayed the work and made it very expensive. However, with the support of generous donors from Jesuit networks and other agencies, the villagers, government agencies and our dedicated staff, we could intervene in almost 88 public schools by the end of February 2016. 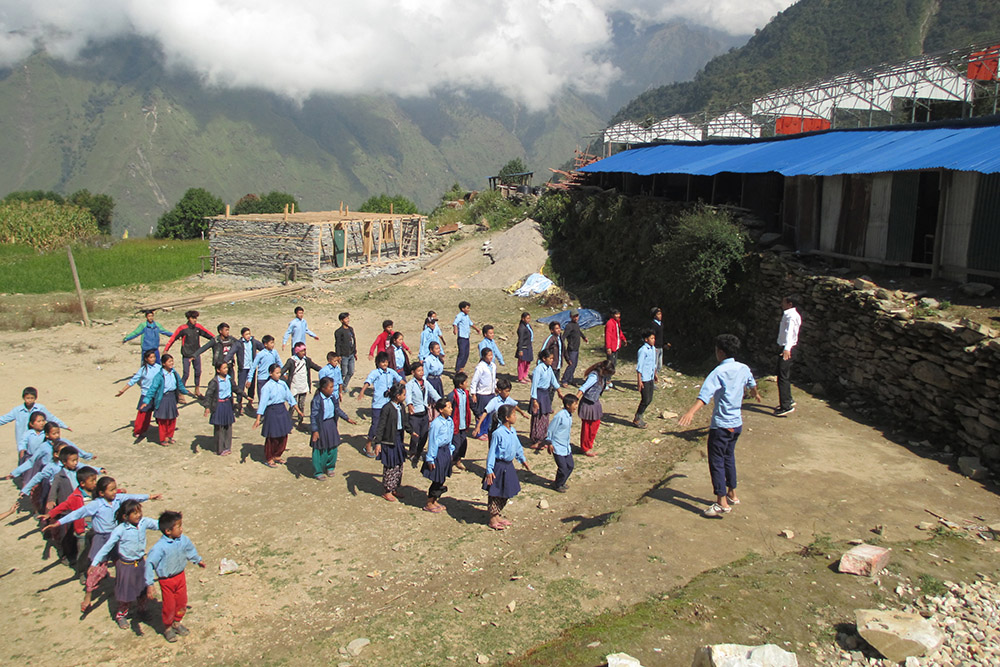 We also found it necessary to train the teachers of the public schools; we also found that the women needed our support and we took up the issue of women empowerment and started constructing shelters and provided livelihood skill trainings.

As I look back and recall those emergency times, I am amazed to find how much we had done and how tirelessly a small team from NJSI would work to get to the unreached areas. In Tipling and in many places where the earthquake had struck, we found the hand of God guiding, protecting and energizing us. May God bless us with generous vocations and energy to reach the unreached!”

Watch the interview of Fr. Michael Parent telling us about the people of Tipling and the meaning this ministry brings to his Jesuit life as well as to the life of the Jesuits of Nepal.

JCSA Pastoral
Share this Post:
Eco-Revolution for the lives of tribal people. Watch Jesuit Stories
For everything there is a season (Ecclesiastes 3: 1)
Posted by Communications Office - Editor in Curia Generalizia