“Discerning Leadership”: a special project of the General Curia and the Jesuit Universities

I dream of a ‘missionary option,’ that is a missionary impulse capable of transforming everything, so that the Church’s customs, ways of doing things, times and schedules, language and structures can be suitably channelled for the evangelisation of today’s world rather than for her self-preservation.

In an article published by the bulletin of the International Association of Jesuit Universities, Fr. David McCallum SJ explains the goals and hopes of the “Program for Discerning Leadership”, a service to the whole Church, based on the treasure of Ignatian spirituality. As Executive Director of the project, he wrote:

What role can Jesuit Higher Education play in supporting Pope Francis’ bold vision for a missionary, outward facing Church that is not just reformed, but transformed in every dimension? In this dream for a synodal Church, Pope Francis challenges clerical privilege, autocratic bureaucracy, and the defensive, institutional centricity still characteristic of much of the Church today. Rather, Pope Francis calls the Church to conversion at the personal, communal, and structural levels and calls forth a distinct kind of authority and leadership going forward.

It is Pope Francis’ call and his request for the Society of Jesus to share the gift of discernment that inspired the founding of the Program for Discerning Leadership. It is a special project of the International Association of Jesuit Universities (IAJU) in collaboration with the Office of Discernment and Apostolic Planning at the Jesuit General Curia.

The first Program for Discerning Leadership was sponsored by the General Curia and offered as a pilot in 2019 with 30 carefully selected participants. The program brought together men and women from over 20 different countries around the world, including personnel from varied Vatican Dicasteries, Superiors General of different Female and Male Orders and Congregations and some members of the Jesuit General Council. 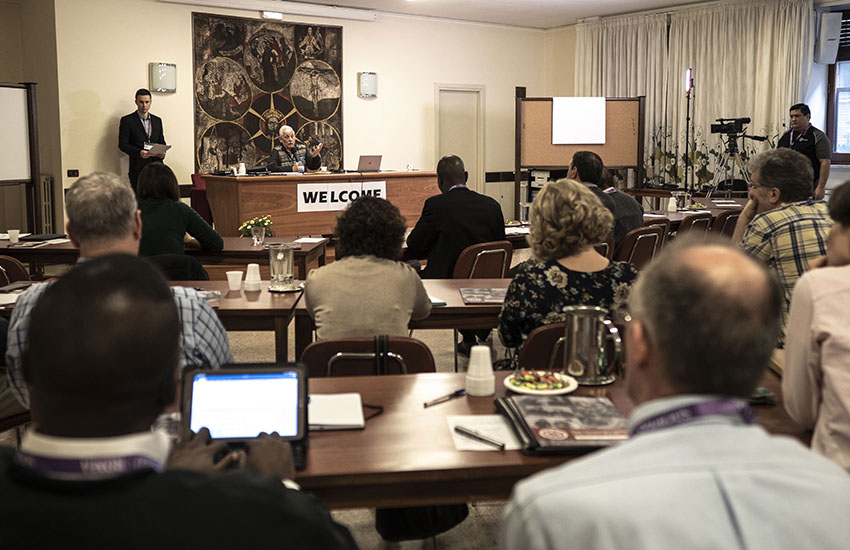 Father Arturo Sosa, as Superior General, then formally instituted the program that continues to offer modules on the theme of Discerning Leadership. The curriculum actively engages participants through a range of spiritual practices from the Catholic faith and temporal tools taken from the disciplines of management and business. From guided reflections, ‘spiritual conversations,’ and practice of discernment individually and in common, the program is grounded in a commitment to deepening trust, which leads to an environment conducive to team spirit, peer learning and community. Leadership that is marked by discernment implies a holistic way of living and, according to Father Sosa, enables participants “to enter in communion in the only body whose head is Christ.” This transformed leadership is more characterized by listening than speaking, and approaches decision making as a creative and collaborative exercise for the service of the world and especially those who are most marginalised.

The Program will facilitate and support the participants in maturing the attitudes, skills, and knowledge required to lead in a synodal manner, i.e., in a way of proceeding that is discerning, process oriented, collaborative, and creative. It includes communications, conflict management, strategy, change management, human resource management. And it helps to understand and practice the integration of these skills in a discerning, reflective manner that involves prayer as an essential feature. We believe that Church leaders enabled and empowered to lead in this manner will over time transform the Church and enact the synodal ecclesial community that Pope Francis is calling for.

Watch the video of the pilot experience in Rome:

Leadership
Share this Post:
For the World CLC, a facilitator in a new context
An invitation to a fulfilling life
Posted by Communications Office - Editor in Curia Generalizia

Synodality: where is it headed?

Cardinal Ravasi – Leadership and a Culture of Synodality