Recently, the Provincials of Latin America met, virtually. They looked at how the Society of Jesus could continue to serve even better the people of the countries where the Society is involved. As elsewhere in the world, Jesuits in Latin America are known as educators. Their networks of institutions at all levels, including, of course, the network of Fe y Alegría that was born in Latin America, are often at the heart of the commitments of the various Provinces and Regions.

CPAL (Conference of Provincials of Latin America and the Caribbean) therefore felt particularly challenged by Pope Francis’ request to sign what he called the “Global Compact on Education.” In fact, Francis wrote a handwritten letter to the Jesuit Provincials of the region in this regard. He told them that he had confidence in them to move forward with this project, which invites the collaboration of families, governments and schools. Recalling that this idea of a compact for education is not new, the Holy Father believes that now is the right time to give it new life. He adds, “Certainly, it is not a question of a simple renewal but of recreating (...), of proposing a path of personal and social integration where the harmonious language of mind, heart and hands calls for a harmonious activity between school, family and government.”

He unveiled this initiative during an intervention at the Pontifical Lateran University on 15 October 2020.Here are a few key sentences from his speech:

“We consider education to be one of the most effective ways of making our world and history more human. Education is above all a matter of love and responsibility handed down from one generation to another.

As such, education is a natural antidote to the individualistic culture that at times degenerates into a true cult of the self and the primacy of indifference.

Today, there is need for a renewed commitment to education (...). The goal of this educational investment, grounded in a network of humane and open relationships, is to ensure that everyone has access to a quality education consonant with the dignity of the human person and our common vocation to fraternity. It is time to look to the future with courage and hope. May we be sustained by the conviction that education bears within itself a seed of hope: the hope of peace and justice; the hope of beauty and goodness; the hope of social harmony.” 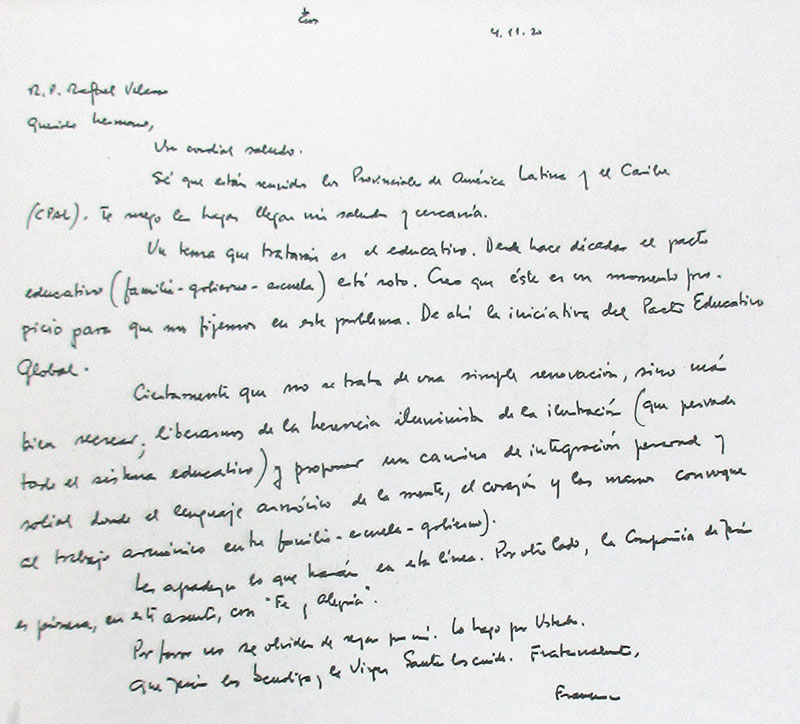 Responding to this request from Pope Francis was considered a priority during the last CPAL Assembly. Father General himself, during the session in which he participated, from Rome with the Provincials, strongly urged them to commit themselves. He told them: “The proposal of Pope Francis is born of a deep desire to contribute effectively to taking the means to found a better future for all humanity, a future full of hope built on human fraternity and harmony with the environment.” According to Father Sosa, the Global Compact on Education is rooted in the pastoral concerns expressed in Evangelii Gaudium, in Laudato Si' and more recently in Fratelli tutti. The global situation of the pandemic makes this pact even more essential to counter the “educational disaster” that the pandemic is causing for millions of young people who, for health or economic reasons, cannot continue their studies.

This project, Father General adds, is in fact very much in line with the spirit of our Universal Apostolic Preferences. He also insists on the fact that the commitment in favour of the Global Compact on Education is not the concern of the “education sector” alone, but of the whole body of the Society. It is a matter of transforming ourselves into a “classroom of global education.” Everything we do can contribute to creating the conditions for the integral maturation of the new generations, so that all Jesuit institutions, whatever their nature, can participate in this pact.

In order to give tangible form to his call, the General signed the Global Compact on Education in the presence of all the Major Superiors of Latin America and the Caribbean. He invited CPAL and then its Provinces and Regions, to do the same. Thus, the announcement was made that “The Society of Jesus in Latin America and the Caribbean has signed the Global Compact on Education.” All Jesuits, their partners and works are invited to sign it on 12 December, the feast of Our Lady of Guadalupe.

CPAL
Share this Post:
Webinar: The challenges of the COVID-19 Era for Jesuit higher education
A wounded world cries out for healing
Posted by Communications Office - Editor in Curia Generalizia