Francis Xavier also had his own path of conversion

Father General is in Javier, Spain. On his way to Pamplona for the opening of the Ignatian Year, he stopped for a few hours at the Sanctuary of St. Francis Xavier, in Javier. While the Ignatian Year recalls first of all the conversion experience of Ignatius, which began on 20 May 1521 in Pamplona, it will also include the 400th anniversary of the canonisation of Ignatius and Francis Xavier, which will be celebrated on 12 March 2022. We spoke to Fr José María Vicente, Director of the Shrine and Superior of the Jesuit community.

The Ignatian Year has its roots in Ignatius’s wounding in Pamplona, but the programme also includes Ignatius’ most famous companion, Francis Xavier. How do you see Francis’s place in this year? How does he share in the spirit of the theme of the Ignatian Year: “Seeing all things new in Christ”?

I think Francis Xavier is a living example of how the Exercises made him “see all things new in Christ”. At first, when he was studying at the University of Paris, his goal, like that of many of his fellow students, was “to attain some ecclesiastical benefit or dignity, and then, by means of such a dignity, to serve God”. Later he reached the point of forgetting himself and thought only of making the light that is Christ known to those who do not know it.

If Ignatius had a conversion experience that began with his wounding in Pamplona so that from that point on he began a new itinerary in his life, we can say that Francis also had his own process of conversion. Even as he experienced the grace of becoming totally impassioned for the Lord, he also experienced the grace of being part of an authentic “Christian, religious, priestly and Jesuit community,” which made him feel fully accompanied in his often lonely life as a missionary of the Lord.

The French Jesuit biblical scholar Xavier Léon-Dufour gave a very good description of this missionary who was born in our little corner of the world. He wrote: “Francis Xavier remains in the hearts of Christians, because he makes the very mystery of Jesus Christ, our Redeemer and Lord, come alive before their eyes”. “His life can help us to admire God, the marvellous artist who with dust and clay fashions masterpieces of humanity and holiness.” “Paul brought the definitive light of Christ from Palestine to Europe, which was a new world for him. One thousand five hundred years later, Xavier carried the reflections of this light to the Far East.” “If Xavier planted the cross in distant lands, it is because he had planted it first in his heart of flesh.” 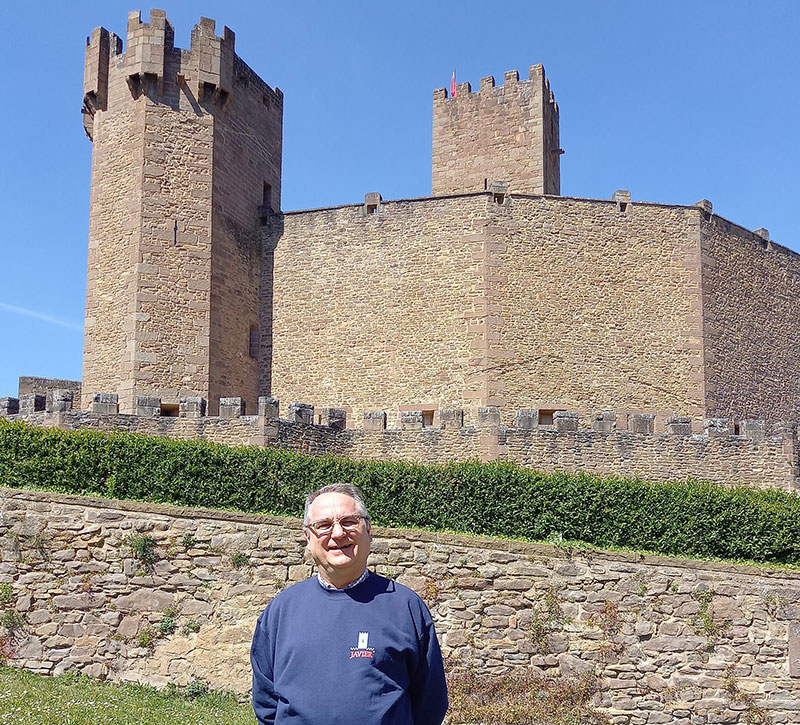 For the shrine and the community, what does Father General’s visit represent as the Ignatian Year begins?

We are all delighted to meet our Father General personally, despite the brevity of the visit. Since 12 March 2022 will be the 400th anniversary of the canonisation of both St Ignatius and St Francis Xavier, Father General’s presence in Javier is also the expression of a desire to strengthen the Society’s mission in this place and to renew the missionary spirit that the Society has had since its beginnings.

Can you give us some hint of how you plan to celebrate the 400th anniversary of the canonisation of Francis Xavier and Ignatius on 12 March 2022?

We will have the opportunity to talk about this in more detail next year. However, I would say that every year there is a pilgrimage to Javier organised by the Church of Navarre. Many people come here to honour our patron saint, since he is the patron saint of Navarre. We call these pilgrimages “Javieradas”. Two of them are held during the month of March, coinciding with the Novena of Grace in honour of Saint Francis Xavier, from the 4th to the 12th of March, the date of his canonisation. Therefore, the Novena of Grace in 2022 will be very special and more solemn than usual. Also, in our preaching and in the Spiritual Exercises we will use St. Francis Xavier as an example of someone who lived to perfection the spirituality of St. Ignatius as expressed in the Spiritual Exercises.