The Smiling Christ of Javier – a meditation for Good Friday

Good Friday is the perfect day to meditate before Christ on the Cross. We suggest that you do so before the famous “Smiling Christ” hanging in the castle of Javier, Spain, the birthplace of St. Francis Xavier. Fr. Arturo Sosa himself meditated before this crucifix during his visit to Javier in May 2021. Here are some passages from an article by Fr. Germán Arana that may help nourish our meditation.

The life of Francisco de Javier is undoubtedly astonishing. The sheer number of his undertakings arouses deep admiration. Even in a culture like ours, increasingly impoverished in terms of substantive proposals of models and values, the attraction of the most universal of the Navarrese has not been extinguished. But precisely because his human adventure was gigantic, when we approach his figure and his significance, we can fall into the trap of remaining focused on the mere external admiration of his prowess.

To avoid this mirage, it may be helpful to place ourselves in the position of a visitor or, better still, of a pilgrim arriving at Javier. Our previous interests will modulate our contemplative leadings. But if we know how to dispose ourselves, the very magnetism of the environment and its evocative potential will lead us to new and surprising centers of interest. I wonder what visitors unaware of the smiling Christ have seen of Javier. Perhaps very little, maybe nothing. Because the rest of what has entertained them, interesting though it may have been, cannot be compared to it.

Probably the most meaningful information about the effigy of the Christ of the castle is the one provided by Juan Antonio de la Peña. This Jesuit described the house and lineage of the Saint in 1620, giving a singular prominence to the holy crucifix of Javier (...) which was like the wellspring of all the spiritual goods of this house. 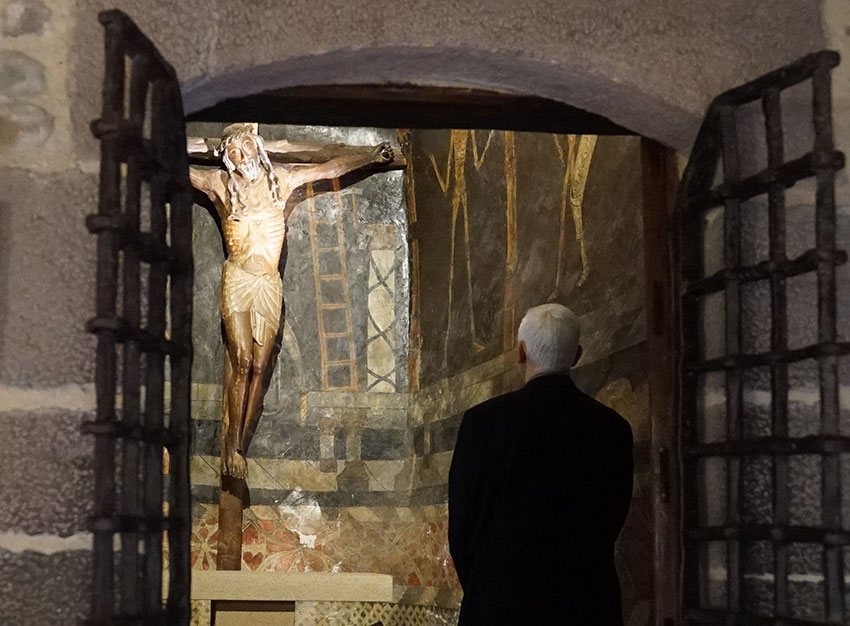 The traveller who approaches it receives a vivid impression. It is a large carving, somewhat more than life-size, with very harmonious and serene lines. Something similar to the spirit of the authors of icons happened to the carver. His prayer, his contemplation of the mystery of Christ, Lord and Redeemer, was naturally prolonged in an work of art that constitutes in itself a densely theological catechesis that introduces the experience of the definitive triumph of love represented in it.

The anonymous author has left us the imprint of a living crucified man. He has not given us the transcription of the painful agony. This is a serene and victorious Christ who has made the tree of the cross the seat of his definitive triumph. In biblical terms it could be said that the Christ of Javier is a Johannine Christ, an image in which the two sides of a single mystery of life and love have been inextricably united.

The Christ of Javier represents a transfigured humanity. The incarnate Word triumphant over sin and death has carried his own humanity, and ours with him, in his victory. Its contemplation produces a serene tranquillity.

Does Javier's Christ smile? It depends on the perspective. Viewed from the bottom up, in the manner of a counter-posed shot, no doubt. That is precisely the intended viewing posture. As the viewer gains height above the image, the smile gradually fades. And if you look down from above, as if in a dive, you might even say that the expression becomes a little grim.

I believe that the Christ of Javier is kind to the humble. He has regained his universal lordship. He has been raised on earth as a sign of universal redemption. He offers a cordial and comforting welcome that can only be given from the awareness of the neediness of those who ardently seek it and need it. He is the Lord of the poor, of the unfortunate, of those who, bound by the thousand wounds of life, cling to the base of the wood as to a plank of salvation. On the other hand, those who settle in their own sufficiency, fatally unaware of their meagre pittance, are not received by the Lord of the poor.