On Wednesday, 7 September, the Church of Santa Maria in Traspontina, on Via della Conciliazione in Rome, was filled with communicators who over the years have collaborated with Father Lombardi in offering the Gospel message to the whole world in many languages and with very diverse technical means. In an initiative of the Vatican Dicastery for Communications, the jubilarian presided over a Eucharist of thanksgiving, surrounded by his friends and colleagues.

It is worth remembering that Father Lombardi was Provincial Superior of Italy from 1984 to 1990. He then served as director of programming and subsequently as General Director of Vatican Radiountil 2016. From 2001 to 2013, he was also director of CTV (Centro Televisivo Vaticano). In 2006, Pope Benedict XVI appointed him director of the Holy See’s press office, a position he held for 10 years. In this sensitive position, he was able to show his fidelity to the Holy Father and the Church while fully respecting the professional demands of journalists around the world. Federico Lombardi continues to serve as superior of the Jesuit community of La Civiltà Cattolica and as president of the Board of Directors of the Fondazione Joseph Ratzinger - Benedetto XVI.

At the beginning of the Eucharist on the occasion of his jubilee, Father Lombardi stated how touched he had been by the personal messages of congratulations and encouragement sent by Pope Francis, Pope Emeritus Benedict XVI, the General of the Society of Jesus and many other friends. He received these testimonies with humility, saying that his entire journey had been marked by the desire to serve the one who had chosen him as a companion, Jesus. Father Lombardi chose to celebrate the Mass of the Sacred Heart of Jesus, and he emphasised in his homily the theme of the self-giving of Jesus on the cross, before which we stand speechless. He gave thanks for having been able to help proclaim the mercy and love of God for humanity: this was his raison d’être. 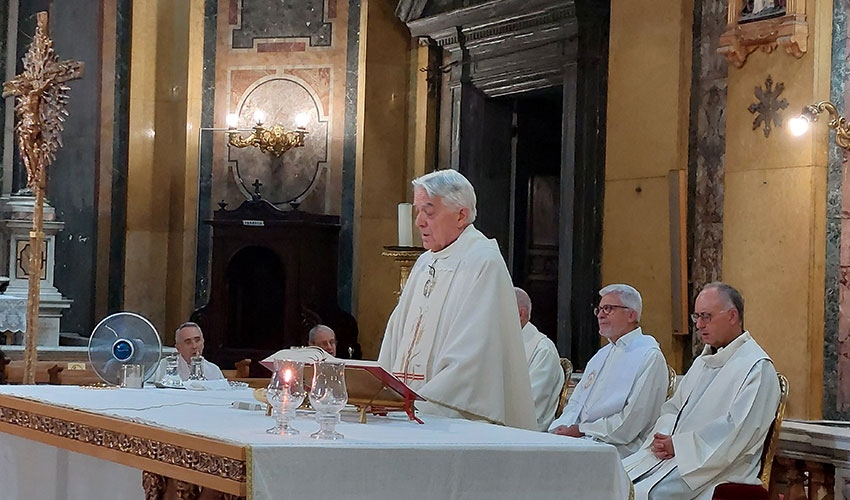 Communications
Share this Post:
“Four Dreams…” The winners of the “Four Dreams” film competition.
Ecumenism and interreligious dialogue: still on the agenda
Posted by Communications Office - Editor in Curia Generalizia

Listening with the ear of the heart

This is a worthy goal for all our interpersonal relationships, and a worthy goal also for those who work in the field of communications... including our team here at the General Curia of the Society of Jesus.