The JCAM meets in Antananarivo… with the participation of Father General

The Jesuit Conference that “covers” the African region has a distinctive name: Jesuit Conference of Africa and Madagascar (JCAM). Even though geography brings these two territories together, the Malagasy have their own identity and live at a certain distance from the continent. The meeting of Major Superiors this October is being held in Antananarivo, the capital of Madagascar, and so will allow the Provincials of the six “mainland” Provinces (and one Region) to have contact with their Jesuit companions on “the island”.

The five days of the meeting are divided into two distinct parts. First, there are the reflections, decisions and other matters that can be classified as “administrative”. The JCAM Provincials share certain responsibilities, such as the formation of young Jesuits. They also have to recommend to Father General the names of Jesuits who can take up positions at the continental level. They must approve an operating budget for the Conference. Finally, they must respond to requests made to them by other Conferences or institutions around the world.

It should be noted that, although all this might seem like the agenda of any Board of Directors, the working method is fundamentally marked by the Society’s “way of proceeding” (our modo de proceder, as St Ignatius put it). This implies a great deal of prayer and spiritual conversation, i.e., listening to the Lord and the other participants before making decisions. 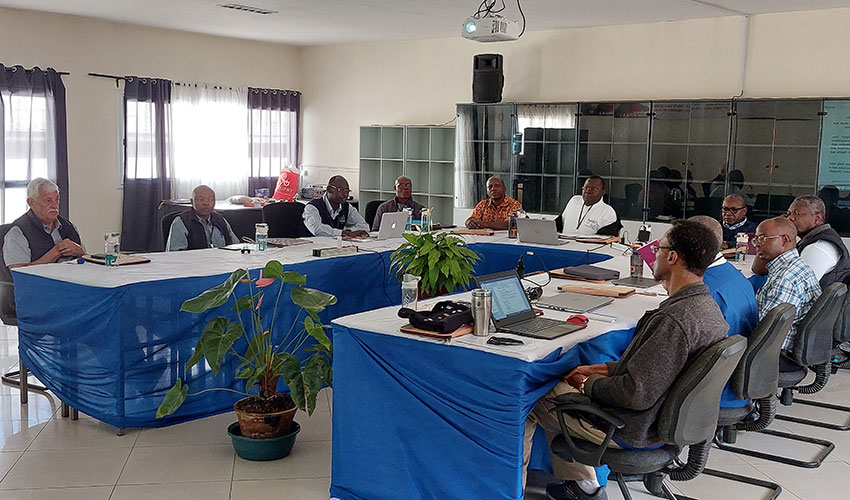 The participants to the JCAM Assembly in Antananarivo.

The other part of the meeting involves a project dear to Father General, a reflection on “Jesuit poverty”. Last year, Father Sosa led a retreat for the Major Superiors of each Conference, and he expressed his hope that all communities and Jesuits would be able to pray and share on this theme throughout the year.

Concretely, the JCAM meeting in Antananarivo began with a day of prayer to put the question of our poverty at the centre of the reflection and the meeting.. Using the now customary formula of spiritual conversation, the Provincials had the opportunity to offer the fruits of the conversations that have taken place in their respective Provinces and then take time to listen attentively to one another. Father General has been present for the so-called “third round” of the spiritual conversation, the one that is centred on prayer and provides an opportunity to gather the fruits of discernment.