Camilla Russell is Head of Publications at the Institutum Historicum Societatis Iesu(IHSI) of the Archives of the Society of Jesus in Rome. She is Australian by birth and affiliated to the University of Newcastle in Australia. Specialist in the Renaissance, her latest book was recently published by the prestigious Harvard University Press. The book is entitled ‘Being a Jesuit in Renaissance Italy: Biographical Writing in the Early Global Age’.

At the launch for the book on 6 December at the Gregorian University in Rome, the Director of the Centre for Ignatian Spirituality, Fr. James Grummer, SJ, gave an enthusiastic presentation. He emphasised how each Jesuit, since the beginning of the Order, is unique, as illustrated by the drawing on the cover of the book. He also emphasised the importance of the exchange of letters in the culture of the Society of Jesus over the centuries. Letters from Jesuits to the Superior General are not only a source of factual information but also an expression of the spirituality these men live out inspired by St Ignatius. 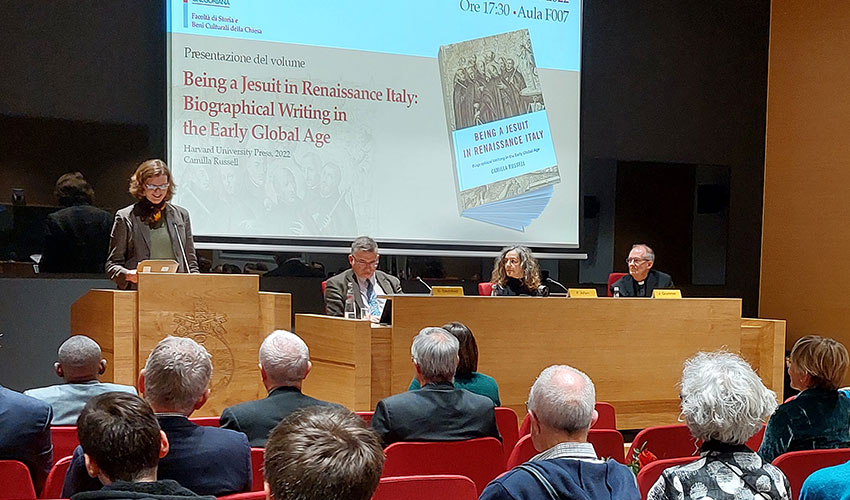 The launch for the book on 6 December at the Gregorian University in Rome.

Fr. Grummer noted how his own experience as a Jesuit allows him to confirm that the “genetic code” of the Jesuits in the 16th century continues to be transmitted to the present generations. He sees this, for example, in the biographical letters that candidates to the Society of Jesus write to support their admission, in the information that is sent to the Superior General when a candidate is sought for an important position, and in the Provincials’ reports following visits to communities and works. Fr. Grummer concluded that in reading Camilla Russell's book one is left with a desire to know more about those Jesuits of yesteryear who were driven by a fiery missionary spirit.

We asked Camilla Russell, who is in daily contact with the Jesuits of the General Curia, to tell us how the portrait that emerges from her study of the letters of the Italian Jesuits of the Renaissance might correspond to what it means to be a Jesuit today. Here is what she shared with us. 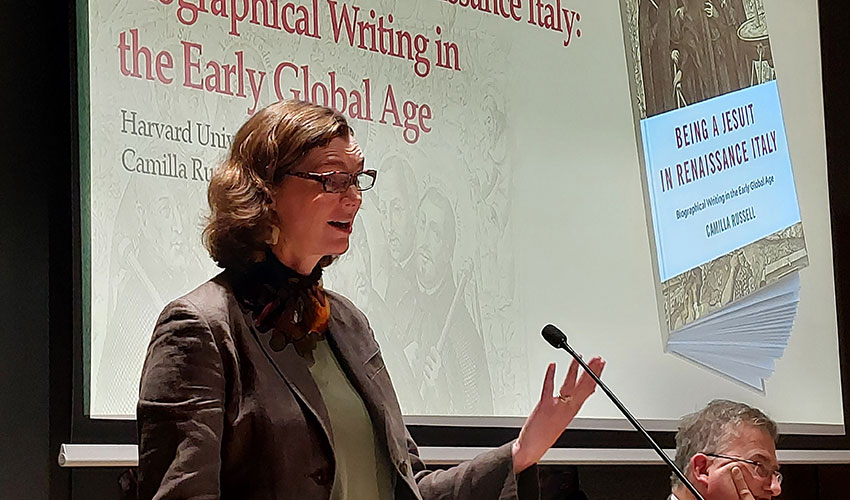 “My book, Being a Jesuit, points to many fascinating intersections between the Society of Jesus at its dawn - in the Renaissance in which it was forged (the subject of the book) - and today’s Jesuits. Despite the many differences between these two periods, individual Jesuits are connected to each other - in the past and present - through the texts that they have used since the 16th century, especially the Spiritual Exercises and the Constitutions. What is particularly revealing from the findings presented in the book is how these textual foundations have been applied over the centuries in Jesuit practice and works, recorded in the biographical documents analysed in my study. They show how single Jesuits saw themselves - and at the same time were seenin their organisational context - as individual operatives within a larger whole, which in turn informed how they worked with others in their collaborations and ministries. This dynamic - with correspondence as its expression and the glue of self-expression and driver of collective operations - is still visible in my work with Jesuits today.

As I remarked in my book, “Untilthe papal suppression of the Society, the processof joining,working, and dyingin the Society was handed down from one generationto the next.” This continuity did not cease with the suppression; rather, it continued after the Society’s reconstitution in the 19th century. As I remarked, “the presence of a Jesuit pope, Francis, on the world stage today is a reminder that he and his fellow members of the Society of Jesus continue to recognize Ignatius and themselves as roots and branches of the same tree that was planted in 1540. In writing their letters, petitions, and reports, the Jesuits seemed to have understood something about their place as single parts in a larger whole to which they bound their lives: the Society of Jesus.” Individual Jesuit works may have been forgotten over time, but the central role of those individuals in animating the operations of the Society are a key ingredient of its achievements. As one Jesuit wrote in Italy during the Renaissance, “this Life ... I see ... is fleeting like the Wind”: what remains is the collective result borne out of the Jesuit’s individual effort.”

Communications Curia
Share this Post:
Christmas 2022
The Society of Jesus has responded to the humanitarian crisis in and around Ukraine from day one
Posted by Communications Office - Editor in Curia Generalizia