On 21st January 1623 Fr. General Vitelleschi issued a decree canonically establishing the English Province of the Society of Jesus. Four hundred years to the day after this decree was issued Jesuits, lay-people and other religious working alongside us in our ministries, as well as a large group of friends and well-wishers, gathered at the Farm Street church in central London to celebrate a thanksgiving Mass for the Province’s fourth centenary.

Around 500 people packed into the church for the Mass. Cardinal Vincent Nichols, Archbishop of Westminster, was the principal celebrant, the Provincial, Fr. Damian Howard SJ, preached the homily, and the celebration was introduced by Fr. Michael Holman SJ, Superior of the Jesuits in London. Fr. Antoine Kerhuel SJ, the Secretary of the Society, joined us with a message from Fr. General, and the Benedictines, the Dominicans, and the Congregation of Jesus were all represented.

The Province was established at a time when the Roman Catholic church in this country was suffering extreme persecution. Edmund Campion had been martyred at Tyburn, less than a mile from Farm Street, forty years earlier, and 28 Jesuit priests and brothers, now recognised as saints and blessed, would share his fate between 1573 and 1679. Campion had, on returning to England a year before his capture and death, issued a challenge to the Privy Council to openly debate questions of faith. A musical setting of part of this challenge, popularly known as “Campion’s Brag”, was commissioned from Sir James MacMillan, a notable composer, to mark the celebration, receiving its world premiere at this Mass. 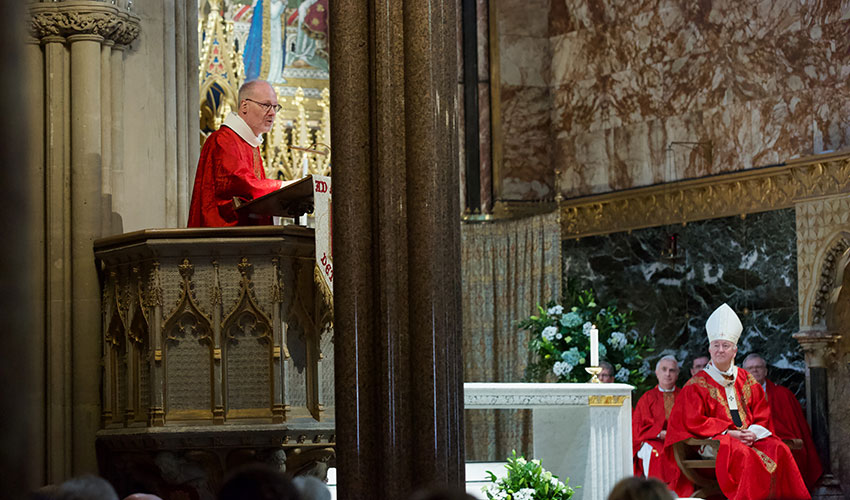 The Provincial started his homily by recognising the contributions of Wales and Scotland to the Province, which took until the 1980s to formally acknowledge this by renaming itself as the British Province. He spoke of the missionary work so central to the life of the Province: “First over the ocean to Maryland, where in due course a daughter Province would see the light of day. Then came missions to the Caribbean, Central America, Calcutta, Malta, present-day Guyana, Belize, Zambia, Zimbabwe, and South Africa.” And he looked forward to the future, with all its uncertainties, to be met with continuing trust in God. Finally he invited all present to make their own the prayer of Dag Hammarskjöld: “For all that has been, thank you. For all that is to come, yes!”

The Province archives are kept in the basement at Farm Street, and the archivist and her team had mounted a small exhibition of relevant material for the day. This included a number of illustrated journals kept by those pioneer missionaries in South America. After the Mass all present were invited to a reception which overflowed to the public gardens which adjoin the house. Later in the day, messages of thanks were received from other communities which had been able to join via livestream, not least the Province care facility in Boscombe where those praying for the Church and the Society had been enthusiastically involved.

Now, onwards into our fifth century!

The Society of Jesus through its parishes, schools, social centers and retreat houses has responded as one body since February 24. Fr. General has asked Jesuit Refugee Service Europe to coordinate this response for the medium and long term.